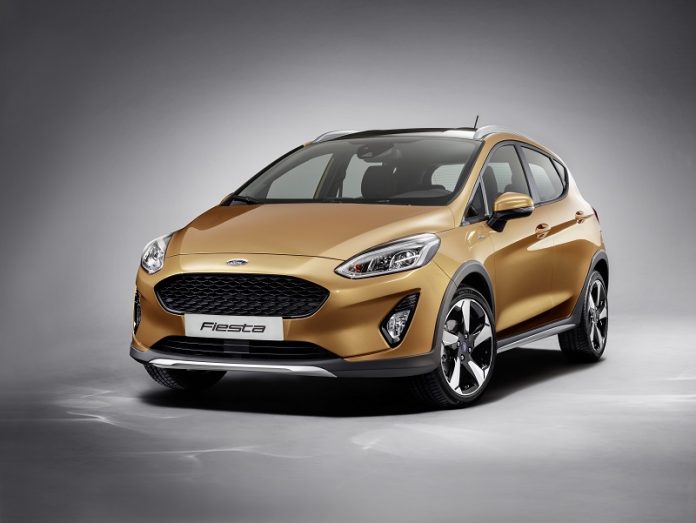 SUVs are so sought after these days, that even small hatchbacks – such as the Vauxhall Viva Rocks and Kia Picanto X-Line – have caught the bug. The new Ford Fiesta Active model is the latest model to join this new craze of faux-SUVs and is now available to buy from a price of £17,790. Three trim levels are available, with a choice of no less than five engines available.

What Does It Offer?

The all-new Fiesta Active is offered in three trim levels; 1, B & O Play, and X – it looks as Ford gave up counting after one by the looks of it. No matter what trim level you go for, you’ll get a Fiesta with an increased ride height and ‘rough road’ suspension to make it more rugged. There are also three driving modes; Eco, Slippery and Normal, plus there is a SUV-inspired body as well as roof rails and ‘Active’ badges, in case you didn’t quite twig that this is not your normal Fiesta.

The ‘1’ – that makes it sounds like someone’s soulmate – comes with features such as 15″ alloys, electric rear windows, rear privacy glass, driver lumbar support and height adjustment for the driver’s seat. The B&O Play starts from £19,190 and as you would expect, this includes the B&O Play system, as well as 17″ alloys, black contrast roof, cruise control, Ford Sync 3 8″ infotainment system with smartphone connectivity, to name a few. This leaves the X model, which is priced from £20,290, and is able to add features such as navigation, keyless entry and start, climate control, rear view camera with rear parking sensors, plus front and rear mats. As mentioned earlier, there is a choice of five engines to be had in the new Fiesta – four petrols and one diesel. The petrol contingent is made of the the award-winning EcoBoost engine, which is available in four different states of tune; 84bhp, 99bhp, 123bhp and 138bhp. These engines are all three cylinder and are mated to an all-new 6-speed manual gearbox, but there is also the choice of a 84bhp 1.5 litre diesel for those looking for better economy and lower emissions.

The new Ford Fiesta Active is available to order now, with prices starting from £17,790.