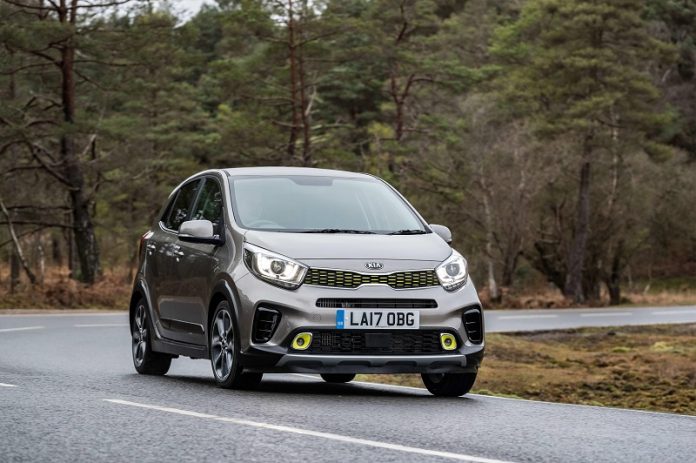 The Kia Picanto may be the smallest car in the Korean brand’s range, but it’s been given an SUV makover to offer a more rugged design. Today, the new Kia Picanto X-Line goes on sale in the UK, with prices starting from £12,595.

X-Line means that you’ll get a Picanto with styling cues from its bigger SUV brothers such as the Sportage, the Sorento and the Stonic. The X-Line is 75mm longer, 30mm wider and 15mm longer thanks to the exterior cladding that makes the car more rugged. The X-Line also has a grille and fog lamp surrounds finished with lime green highlights to help it stand out from standard Picanto models, and it looks pretty funky in my eyes.

There are also metal-look skid plates at both the front and the rear to give more protection although, let’s be frank here, this is not a car for going off-road. In fact, like the other models in the Picanto range, power is fed to the front wheels and all four. So like the Vauxhall Viva Rocks I tested last month, it’s designed to offer the looks of a small crossover, rather than having the full-blown off-road capabilities.

Priced from £12,595, there is a choice just one engine, a 1.25 litre petrol, which can either be mounted to a 5-speed manual or to a 4-speed auto if you pay £650 extra. As you would expect from a power output of 83bhp, it doesn’t offer much poke, but it’s economical as it’s able to offer up to 61.4mpg on a combined run with 106g/km of CO2 emissions. These figures do fall however, if you decide to opt for the automatic in place of the manual. In regard to kit, the X-Line offers a pretty decent specification, with goodies such as a 7″ infotainment system with smartphone connectivity and navigation, autonomous emergency braking, hill-start assist, climate control, faux leather seats, keyless entry and cruise control. True, it may cost more than the Viva Rocks, but the Picanto offers more kit, and if you were to spec the Rocks to the same level you’d be spending over £14,000 and you still wouldn’t enjoy features such as keyless entry or autonomous emergency braking.

The kit is not the only area where the Picanto has the Viva licked – the boot space is 255 litres with the rear seats up – 49 litres more than the Viva – and that can be increased to over 1,000 litres if you fold them down. I also think the Picanto looks better, but that is of course is subjective, plus that’s not to say the Viva Rocks ugly, it’s just not as sharp or as modern if you ask me.

Another advantage with the X-Line is that you do of course get Kia’s famous 7 year warranty, which has always been quite a big carrot to dangle in front of prospective buyers. Add that to the fact that the latest Picanto is the safest small car Kia has ever built and you start to paint a picture of a car that looks rather appealing.

If you fancy snappy up this rugged little number, then you can do so now as the car goes on sale today and is priced from £12,595.