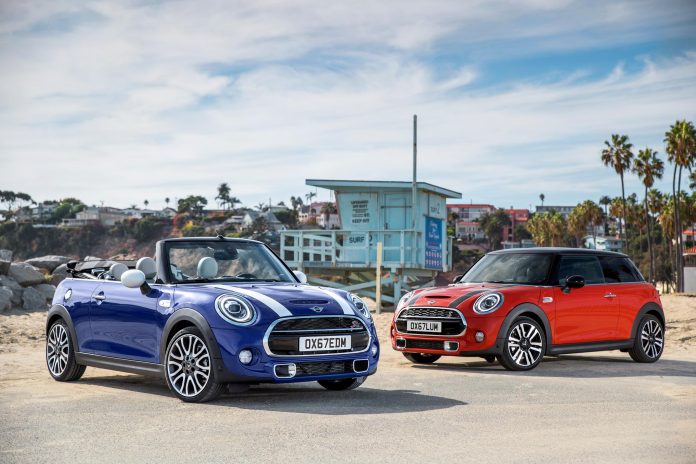 Ok, I’ll admit it. Looking at the new Mini, you may wonder if there is anything new about it at all as it looks to be the same as before. In fact, you may think that the headline of this article is complete nonsense. However, as you will soon see, Mini has been hard at work to install plenty of new changes in to the new Hatch and Convertible including new technology, a new automatic gearbox and refined engines – and that isn’t even the whole story.

One of the major updates for the new Mini Hatch/Convertible is the introduction of LED lights, which will feature at both the front and rear, and will be made available across the whole range. On top of this, there will also be the option to specify your Mini with adaptive LED headlights, which feature a matrix high beam. This enables to high beam to operate seamlessly without blinding other drivers on the road. This feature, which is first in its class, is also able to perform functions such as offering additional light to the side of the road in both urban and rural areas. Each lamp is divided into four horizontally arranged segments, which are activated and deactivated independently of one another at speeds of over 45mph – pretty clever, eh?

One thing that the BMW Mini has always been able to offer, is a great level of personalisation, but the latest model takes this to a new level. Thanks to 3D printing, buyers will be able to create and order bespoke trim pieces via the Mini Yours Customised service, which will receive its own online shop later this year. There are three brand new colours to the range as well; Emerald Grey metallic, Starlight Blue metallic and Solaris Orange metallic, plus there are new leather trim and colour line options to give great choice. The Mini Yours Interior in Piano Black now comes with the option of a distinctive backlit decorative strip for the passenger side of the instrument panel in a Union Flag motif. The background lighting will mirror that supplied by the ambient lighting as part of the Mini Excitement package and is a new option for 2018.

It’s not just the lights and the personalisation that has been changed though; there is a new 7-speed automatic gearbox and the engines have been made a bit lighter too. As standard, all-new Minis come with a snappy 6-speed manual, but if desired, you’ll be able to specify a 7-speed Steptronic auto with a double clutch. The transmission comes with an all-new electronic selector lever, and in the case of the Cooper S variant, paddles on the steering wheel. The engines have been revised in order to deliver even more driving fun according to Mini, and as a result the engines are a bit lighter thanks to new engine covers. They are made out of carbon fibre reinforced plastic which has been made using recycled materials from BMW’s production of its electric vehicles. As well as this, the Mini ONE’s three-cylinder engine has now grown in capacity to 1.5 litres and as a result it’s able to produce 10Nm in torque extra, bringing it to a total of 190Nm.

The new Mini features a new steering wheel with multi-function buttons and as standard, all models will be fitted with a 6.5″ colour display that is controlled with a rotary controller. If this isn’t enough though, there is an option to step up to the new Navigation Plus Pack. This adds a bigger screen – 8.8 inches – which has a touchscreen display, and is able to offer features such as navigation (naturally), Apple CarPlay, wireless phone charging and Mini Connected Services to name a few. On a slightly nerdier note, this is the first Mini model to display the brand’s new badge, which now features a flat, two-dimensional design to offer more simplicity. I personally prefer the previous logo, but that is of course my opinion.

The new Mini Hatch/Convertible will launch in the UK on March the 17th with full specification and prices to be confirmed.