Regular followers of Car Obsession will know that recently I bought a Mk2 Mazda MX-5. For those of you not in the loop, I purchased a it as a car I could use and abuse on track, after getting cold feet over tracking my Mk1, otherwise known as Monique. Despite having the right kind of modifications, I got to a point where Monique has just become too precious to pound the tarmac of a racetrack.

Getting the green light

I had been toying about with the idea of getting a track car for a while, but given the fact my wife, Patsy, and I were in the process of moving property, she wanted to hold off until next year, which seemed fair enough to me. However, I had already booked a track day at Snetterton for the 16th, and because my Mk1 has recently had a lot of maintenance work done (service, cambelt, water pump, etc.) Patsy had also come to a point where she didn’t want Monique to face the abuse of track work.

So with a sudden change of heart, she helped me look through the classifieds to see what sort of thing we could get our hands on. The budget wasn’t huge, but in truth, it didn’t need to be when you have cars such as a Renault Clio RS 182 that could be picked up for relatively small change. 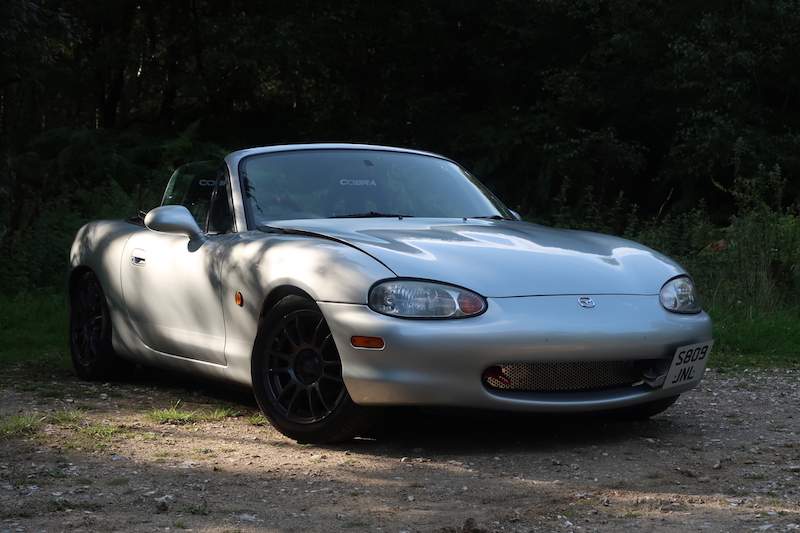 Without dragging this part of the story too long, I opted for another MX-5, purely because I have prior ownership experience, meaning I knew what to look out for on the used market, and also because I wanted something cheap and rear wheel drive in case I wanted to practice a bit of drifting. Also, I wanted to originally take Monique on track, so I didn’t want to lose out on the chance of experiencing an MX-5 on track.

More about the car itself (briefly)

I know you probably want to hear more about the track day itself, but I just want to briefly fill you on the car itself. Produced in 1998, it’s one of the first Mk2 MX-5s made, and it’s the 1.6 litre base spec, so it has no air con, keep fit windows, and on the whole, not much in the way of luxuries, but that’s fine as this is to be a track car anyway. 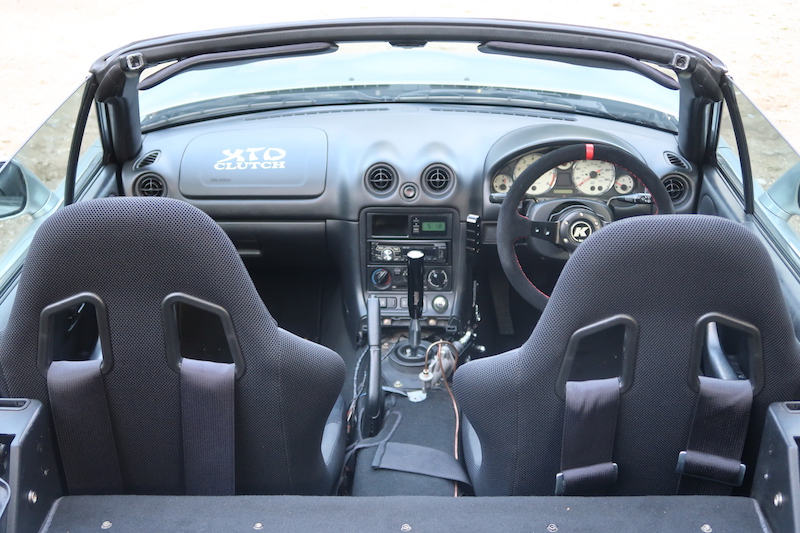 Despite being in September, the week leading up to the track day was pleasant and warm – the complete opposite to the conditions on the track day itself. The drive up to Snetterton saw cold climates and wet weather – not what you want when you have a rear wheel drive with a welded diff.

The rain did get lighter once we arrived at the circuit, but it was still drizzling, even though weather reports said that no more rain was due. With me on the track day I had good friend Chris (A.K.A. PocketRockets) and his EP3 Civic Type R as well as his fiancee, Becca, and my wife, Patsy. 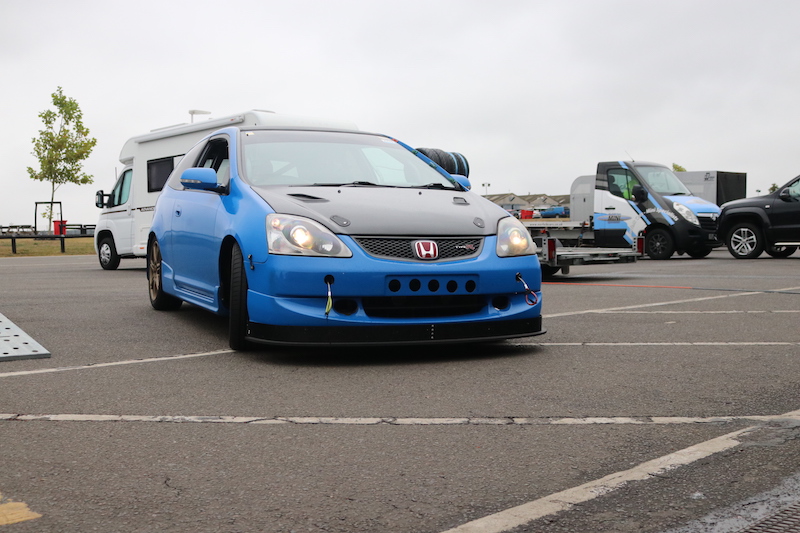 After doing the necessary tasks such as sound testing and driver’s safety briefing, it was time for sighting laps, which gave me some chance to get used to the conditions and of course, the car.  This seemed fine as it was done at relatively low speeds, but once I was let loose on the track, I found certain parts of the Snetterton tarmac very slippery, and in fact, I span out at my first proper stab of Agostini.

To be honest, that made me even more tentative, especially as there were some very expensive examples of machinery on track (cars such as a Ferrari 458 Challenge, McLaren 675LT and Ferrari 430 Scuderia) and I didn’t want to end up careering in to them. To make matters worse, there were more red flags being waved than a bullfighting competition, meaning I was in and out of the pits more often than a miner!

Getting in the groove (sort of)

I did finally get to a point where I could complete more than one or two laps before being forced in to the pits, and slowly but surely, I started following some sort of racing line, although there were still plenty of cars going past me. This was fine, as I expected it, and to be honest, I’d rather go at my own pace and have people think I’m numpty compared to driving to fast, crashing, and people confirming I’m a numpty.

Wilson and Agostini were the trickiest corners to tackle in the greasy conditions as they are tight, requiring more steering input, meaning the welded diff had more of a chance to get the car sideways. In fact, there was a moment where the car was virtually ready to spin on the exit of Wilson, but thankfully I did just about enough to keep the car pointing in the right direction. 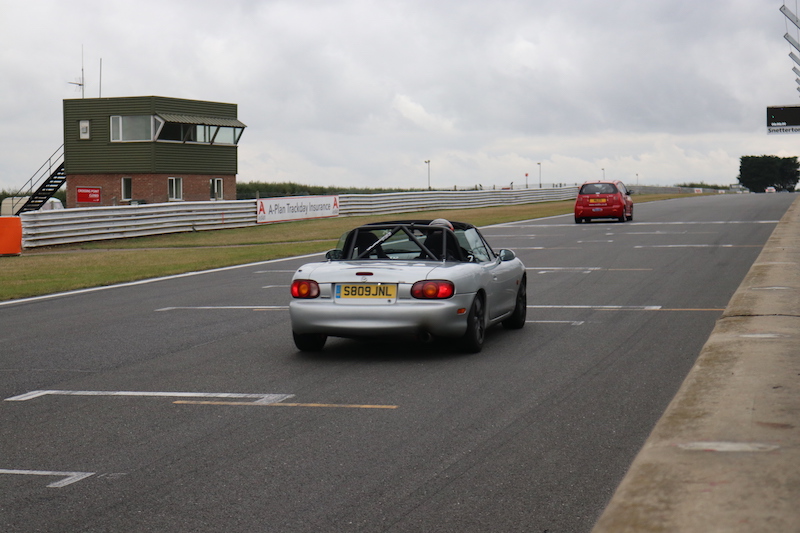 Another problem with the welded diff is that the rear end would ‘skip’ once I approached 100mph, but this wasn’t a huge problem as there weren’t that many times that I was able to reach such a speed. Either way, I’m definitely going to looking at fitting a limited slip diff for my next track day if possible.

Thankfully, the track dried out noticeably more after the lunch period, meaning I could push the car harder, and use more of the track without fear of hitting low grip areas that may cause a spin. I still had a fair amount of cars passing me, but it felt like I was setting a higher pace, but little did I know that a major problem was on its way…

It was getting towards the last knockings (pun intended) on the day when my Mk2 developed what turned out to be a very serious problem. Coming out of Wilson, I changed from second gear in to third and all of a sudden, the power seemed to fade away. The rev limiter was still climbing faithfully, but there was no actual power to coincide with it.

So, I took the rest of the lap very easy, making sure not to put any more stress on the car than needed. I managed to get in to the pit lane, but as I turned in to the paddock, the battery warning light came on and the car completely died, meaning I had to coast as far as I could once I got in to the paddock.

In a panic, I ran over to the garage Chris and I had hired, calling him over rather frantically. We got to the car, lifted the bonnet to find that the coolant tank was bubbling away like a witch’s cauldron, with a fair amount of it meeting the blacktop of Snetterton’s tarmac. My wounded Mk2 MX-5 was causing a little bit of a blockage for other track users, so we attempted to push it back to the garage, which was very tough going, because of the welded diff.

With a few helpers, we made good progress, but the momentum we made from pushing was ruined when a Ferrari 458 Challenge decided to cut across us and proceed to complete a turn that used more points than it needed, causing us to stop unnecessarily. Once we got nearish to the garage, we stopped as Chris looked ready to faint through exhaustion, and we decided to let the car cool down as it wouldn’t start.

Half an hour later, we tried again, and this time the car started, although doing so presented a very audible knocking noise. Chris predicted a bottom end issue, and we checked the oil, only to find it was bone dry. Oh fudge. This was my fault as I had forgotten to check the oil levels at lunch time, which had now cost me dearly…

At this point, it was clear that I would not be able to drive the car all the back to where I live in Worthing, so it was time to call around some recovery companies. This is in itself is a long story, so I’ll try to keep things brief. Through our bank account, the wife and I have breakdown cover with the AA, so we thought we’d give that a shot. It turns out we only had HomeStart, but because of our loyal custom with the bank, we were told our cover would be upgraded free of charge – winner, winner, chicken dinner.

This cover, supposedly, was fit for recovery from race circuits, which seemed far too good to be true. Turns out it was, because not long after the AA had dispatched someone out to us, they sent him back because we were not covered… This left us in quite a pickle as it now meant we would have to pay for a local recovery firm to take us home.

Not only was this very pricey – we were getting quotes from £300 all the way through to over £700 – but a lot of the firms didn’t want to take the job given the amount of distance that needed to be covered. Therefore, we rang the AA back to dispute the fact that they had told us in the first place that we would be recovered under the cover we had just put in place.

After a lot of toing and froing, they agreed to honour the recovery as they listened to the call recording and discovered that they had indeed told us we would be recovered, even though we had been very honest, and we had told them that the problem had occurred on a trackday.

You’d think it would be smooth sailing from here on in, but there were a fair few twists in the tale, such as the recovery person being delayed, meaning I had no choice but to nurse the car of the track’s premises before they locked the gates, and the fact the AA refused to send out the recovery after the patrol driver had assessed the damage, which caused another call to the recovery team in yellow.

Long story short (well, not really short) from the original call to us getting home, it took over 10 hours to get home, meaning we got back to a dark and peaceful Worthing at around 02:45.

Moral of this tale of woe? ALWAYS CHECK YOUR FLUIDS!!!

What next? I’ll source a replacement engine and chalk this down as experience…