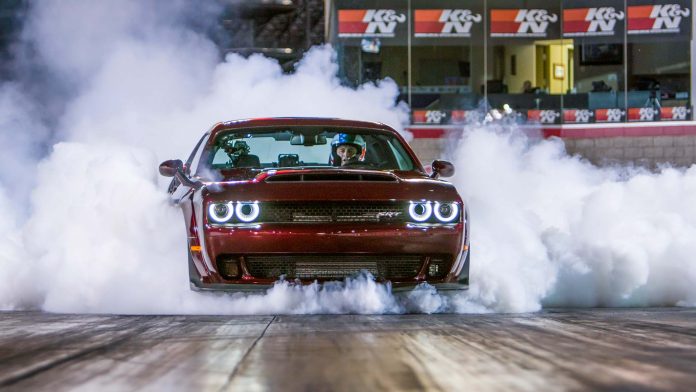 Good evening everyone, it’s that time again – Top Gear time! Last week’s episode set a high bar, so high in fact that I gave it full marks. Was this week’s episode able to match that? Well, on this week’s show we had the Dodge Demon, the Kia Stinger, the Hyundai i30N and, erm, a Citroen 2CV. Right, time to dissect!

Matt LeBlanc kicks of the show with a car that he believes is better than the exotic supercars from the likes of Pagani or Lamborghini, but at a fraction of the price. We enter a shed to find something menacing lurking – the V8 powered Dodge Demon. Although it looks devilish from the outside, it doesn’t exactly look as if it’s going to threaten a bona fide supercar anytime soon.

LeBlanc takes the car on the road in a bid to prove his point and to begin with, it seems to make sense. The Demon, for example, has got the most powerful V8 engine fitted to any car in history, and that in itself is worth infinite bragging rights. It has a big supercharger so it whines away as if the car is in pain when you tear up the tarmac. This really does seem like a beast then.

However, as is the way with muscle cars, it all falls apart a little bit when he has to go around something some Americans are yet to encounter – a corner. Predictably, the Demon’s bravado come loose a little bit, like an out of place thread on a fancy suit. Blimey, did I just compare the Demon to a fancy suit? That’s not really what I had in mind.

Anyhoo, despite this small barrier, LeBlanc goes on to state that if you pay $1 dollar more for this $84,995 beast, you get…..a crate. But not just any crate, this has some tools, skinny tyres for the front, a new ecu and a new air filter. The result is a massive slab of American muscle that is able to deliver 840hp. Those are some serious numbers, but sometimes a practical really helps to drive the point home.

So, he takes the car to a drag strip and pits it against the much more exotic, much more expensive Lamborghini Aventador. You can see where this is heading can’t you? In case you can’t, I’d encourage Italian car fans to hide behind the sofa for this bit. This isn’t quite enough though, so the two Americans (Dodge and LeBlanc of course) try something a bit more ambitious – helping to land a NASA ‘research’ (not spy) plane called the ER-2. You simply have to see it to believe it…

Earlier this year, we saw James May give the new Kia Stinger a blast in The Grand Tour, now it was Rory Reid’s chance to get his excitable hands on one. I’ve said it before, but Reid is a breath of fresh air, and his enthusiasm and passion really shines through. It could have been easy for him to completely sing the praises of the Stinger like many have done, but it was an honest, but more importantly fair, review. It wasn’t just Reid that impressed – the production of this film was simply top notch, and on par with the graphics used in the Honda v Lexus test in last week’s episode.

Reid does of course have a fair few things of a positive nature to say about the Stinger, but I quite liked the fact when he said that driving it felt like “moonwalking in brogues” – I.E. a bit odd. Time to ditch the odd dancing for another Korean upstart – the Hyundai I30N. Like the Stinger, it has seemingly come out of nowhere, and it’s also received a fair amount of praise from the motoring press.

Reid is definitely more won over by the Korean hot hatch and makes the bold claim that he would rather have one of those than a Golf GTI, the daddy of hatches. However, he delivers a compelling piece, and just in case that wasn’t enough, he pits them together in a head-to-head, and there’ll be no prizes for guessing which was the winner. Which would I have though? I’ll come back to you on that one…

Two Irishmen Get In To A Car…

This may seem like the start to a joke, but in fact it’s not, as there were not one, but two stars in the reasonable fast car this week. As you have guessed, they both hail from Ireland, and they are both comedians as well. Step forward Dara O’Brien and Ed Byrne. Now although the interview was good, and sprinkled with some witty banter, but if I’m honest, I really didn’t miss this segment last week, so it’s making me wonder if the show really needs it anymore? I know, that is a bit of a brash thing to say, but I’m just throwing it out there – how about ditching it to give more time for another car based film? Just digest that for a few moments. However, I must say that it was entertaining to hear about the pair’s car history, and also to watch how competitive they were as well, which always made having two guests on more interesting than just one guest.

We finish the show with Chris Harris looking to highlight the what he believed was the game-changing car that the world has ever seen. LeBlanc suggests that it could be the Mercedes C-Class, given the fact that it’s the car that introduced the most tech to the world, or that perhaps it could be the Model S. It soon becomes clear that he miles from the mark. Cut to France and a clapped out (sorry Chris) Citroen 2CV.

However, this is not just any 2CV, this is Harris’ 2CV, which he bought with his own money. As LeBlanc asked later in the film – much to my amusement – why? Yes, this is the car that Chris Harris states has been the most ground breaking in the motoring world, and thankfully LeBlanc is on hand to question his colleague’s sanity.

Harris tried to prove his point by offering the American a ride, which he reluctantly agrees to and before you know it, Harris is being handed a bonnet and instructed to drive across a field why his American colleague holds a bulging basket of eggs on his lap. The point? Well in case you didn’t know, one of the goals of the 2CV was that it had to be able to drive across a field whilst being able to offer enough headroom for church-goer’s hats and without breaking any eggs. I know, why don’t other manufacturers do this? This turns rather…messy, so they try another test to see if the 2CV is able to deliver what it as designed for. The second test is just as bizarre as the first, and that’s to see whether it can do 37mpg whilst carrying 50kg of farm produce. LeBlanc chooses two sheep for the challenge, prompting Harris to ask why he didn’t use potatoes, to which LeBlanc replied; “potatoes won’t crap all over your car” – a genuine laugh out loud moment, another example of why I think their chemistry has come on leaps and bounds.

This still isn’t quite enough, so Harris decides to take him and his non-believing colleague racing, 2CV racing to be exact. Yeah, it turns out there is such a thing, so I think I’ve seen it all now. Thankfully for Chris, they decide to borrow another 2CV for this perilous race, and boy has it got some guts – a whopping 50hp to be exact. After securing a podium finish, this seems to be enough for Harris to convince LeBlanc that the 2CV is a very important landmark in automotive history. Me however? You’re going to need to try a lot hard sunshine…

So although it wasn’t quite as thrilling or spectacular as last week’s episode, it was another strong outing from the Top Gear boys, leading me to think whether it has the edge over The Grand Tour. That is difficult for me to say, as I grew up watching Clarkson, Hammond and May, and as a result, there is most definitely an emotional attachment there.

However, I am not the only one that feels this way judging by the polls I have submitted on social media. At the time of writing, 75%(!) people on Twitter prefer Top Gear, whilst on Instagram it’s 6 to 1 for Top Gear as well. You know what they say, what can’t speak, can’t lie…