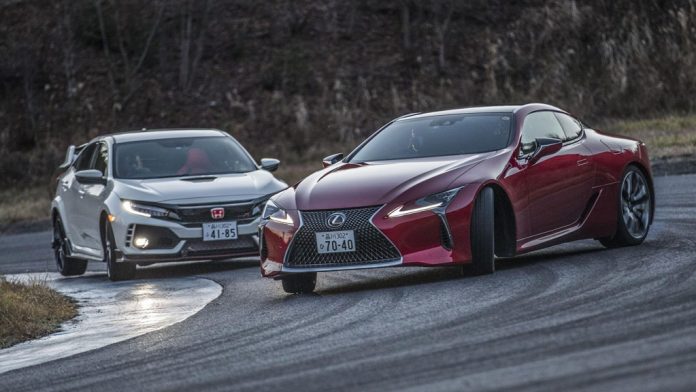 Evening all, sorry for the late article, I’ve had a busy day filming yesterday! Right, I’ll cut straight to the point – if you love a bit of JDM action, then this is going to the Top Gear episode for you, as the land of the rising sun was the main focus for this week’s episode, and boy was it good!

The episode starts with Chris Harris taking the Lexus LC500 for a spin. As always he delivers an informative, but engaging review, and the way how the video is shot is really cool. There are plenty of graphics that make it feel like a Japanese cartoon and the whole production just looks so slick. Harris praises the fact that Lexus has chosen to go with a old-school V8 rather than a hybrid system, but questions the price of the car, as it’s getting on for £80,000.

So then, that is bound to be out of quite of few people’s budgets, so what about something a bit more cost effective – and a bit more mental? Cue the Honda Civic Type R, the hot hatch that makes no apologies for what it is. Harris talks about the sweet gearbox and the fact Honda has opted to stick with front wheel drive rather than four wheel drive. He goes on to say this is better because you have grip when you want it but you can still break traction when desired – cut to him sliding the Type R round a bend like a complete hooligan. Good work sir, good work indeed. Now comes the serious part though, as Harris puts the two toe-to-toe. He does of course need another driver. Step forward The St – oh no wait, it’s not The Stig, but his samurai cousin. After a puff of smoke, he powers off in the LC500, leaving Harris to take the wheel of the loud and proud Civic Type R.

The production of the race is not only fantastic, but it’s exciting too, even though I’m not fully convinced that the Type R would have genuinely won the race. Still, seeing the pair of them drift through corners before transitioning in to interesting graphics, which simply looked great. A very strong start to the show then.

After a short break in the studio, the action heads back to Japan, and once again we join Chris Harris, only this time he is joined by Matt LeBlanc. They are set an ambitious challenge to buy a Japanese car that can be imported to the UK and then sold for a profit – easy, right? The pair are handed a million yen each, which as they point out is about £7,000. They have the money, now they need to reach the site of the auction.

Harris decides to get the subway in a bid to beat the rush hour traffic, whilst LeBlanc opts for a local taxi. Once they get there, it’s clear that they didn’t anticipate just how big it would be. The drone shots really highlight just how vast the selection is. It must have been simply overwhelming, but not quite as overwhelming as the auction system as Harris and LeBlanc soon find out. After LeBlanc bashed the hell out of his bidding button and Harris seemed to have a decent car sewn up, they reveal their buys. Harris bought a stunning Mazda RX-7, whilst LeBlanc feels he has got an R34 Nissan Skyline GT-R, but it soon turns out that he’s actually GT-T. Whoops. He tries to look on the bright side, but it’s clear that he’s made a bit of a cock up.

That faux pas aside, it’s time for them to put their JDM weapons to the test, providing some great entertainment in the process. Some have questioned the chemistry between the two, stating that it doesn’t seem genuine, but it seems pretty good to me. The first challenge is an interesting one and involves a race and sumo wrestlers. You have to see it to be believe it…This segment of the film then concludes with the pair of them visiting the Fukushima disaster zone, which looked to be very daunting to say the least.

Reid Is Still A Bit-Part Player

In the past, I – and others – have said that Rory Reid needs to be used more in Top Gear. Yes, he presents Extra Gear, but I feel he has so much more to give on the main event. That aside, he heads to – you guessed it – Japan where he checks out the car scene over there. He starts in a very humble and honest K Series car, explaining the conditions that habitants have to abide by to keep a car, before moving on to something a bit more…bold. He waits until nightfall and checks out the modded car scene, and boy is it colourful. After a bit of persuading, he gets given the keys to a very sparkly – and distinct – Datsun 280zx. On his drive he encounters Lamborghinis so bright and bold, even a rapper would say it’s a bit much.

This only whets his appetite as Reid hunts down the Le Mans winning Porsche 962, which believe it or, is road legal. As you can imagine Reid is very excited about the whole thing and it’s great to see his passion and enthusiasm shine throughout the film. If this isn’t a call for the Top Gear production team to utilise Reid more, I’m not what is. We head back to the import challenge and we see that LeBlanc and Harris made it out of Fukushima unscathed. They turn up to a race track and the pair are challenged to have a go at tandem drifting, which turns a bit…messy. This leaves both cars rather battered, which makes the task of selling them in the UK much harder. Oh dear.

The pair decide to have some wanko soba to help improve the mood, with Harris that he prefers to have a drink or two before he has a…never mind – you get the jist. After winning the impromptu challenge of seeing who can eat the most bowls of wanko soba, it turns out that there is only space for one car to be transported, so it’s a race to the finish to get their car back to to Blighty – a good way in which to end the episode.

All-in-all, this for me was one of the best – if not, the best – episodes of Top Gear since Clarkson, Hammond and May left. The episode had great cars, a slick production, fantastic content and funny banter. I also feel this episode raised a question – do they really need to have a guest on? There was no guest this week and I can honestly say that I didn’t really miss it. I don’t want to award 5 stars willy-nilly, but I really do feel this was a 5 star episode.