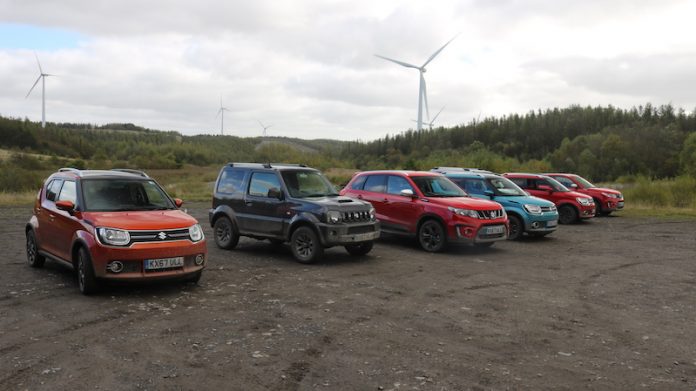 Earlier this month, I was invited by Suzuki to test their cars, but not in the usual way. Normally I’d turn up for a press drive day, battle to get some keys, and then hit the public roads to test whatever car it may be. The Suzuki ALLGRIP experience though, was something a little different.

What on earth is ALLGRIP?

Good question, glad you asked. ALLGRIP is the brand name Suzuki uses for its four-wheel drive models, and in fact, it’s broken down in to three sub-brands. There is ALLGRIP Auto, which uses front wheel drive under normal conditions, but when more grip is needed, power is also fed to the rear wheels as well as the front. This technology is fitted to certain Swift and Ignis models. It’s handy to have, but unless you need it, I’d urge you to go without it as the cars are lighter and more fun to drive in front wheel drive only. We then have ALLGRIP Select, which is used in the Vitara, Vitara S and the Baleno. This mode offers a choice of driving modes such as auto, sport or snow/mud, giving the driver to choose what type of drive they are after. It also has a ‘lock’ mode to offer better traction when needed. This was the mode I got to test first, as I climbed in to the sporty Vitara S, a car that I had enjoyed around this time last year when I reviewed it.

Completing the ALLGRIP hat-trick is the rugged ALLGRIP Pro, as used in the long-standing Jimny. This features locking differentials and a low-range gearbox for when the going gets really tough. This is the best choice for those looking for a ‘proper’ off-roader, although the Vitara S is able to do a decent job.

How do they perform?

Well see for yourself with the videos below, as I was able to have a go in both the Vitara S and Jimny in the rolling hills of South Wales. The venue of was a specialist off-road centre, in which brands such as Land Rover have tested their latest models. The Vitara S joined the Ignis‘ on a trail that was challenging but not too intimidating, whereas the Jimny had a more hardcore path to match its hardcore off-road ability.

The Vitara S may be a sporty SUV with the same peppy 138bhp 1.4 litre Boosterjet that’s to be fitted to the new Swift Sport, but it’s still able to get’s hands, erm, I mean tyres dirty. Armed with the ALLGRIP Select, you’ll able to drive the car in Auto mode, which will the leave the car to its own devices, sport for when you want a more dynamic drive, and snow/mud for when it gets mucky. There is also a lock mode that can be used to give better traction, which was needed when me and my co-driver Kevin Haggarthy tackled a steep muddy incline. Thank to a large, muddy puddle at the bottom, there was some initial slippage as the 17″ wheels searched for some traction. This initial slip was a tad discouraging, but before that thought had crossed my mind, the much needed traction was there, and before I know it, the car was pulling itself up with little fuss. Although the ascent was a good test of the four wheel drive system, the main reason was to test out the hill descent control. For uninitiated amongst you, what this feature does is to allow the car to roll downhill at a nice steady pace without you having to do any do any pedal work. All you really need to do is to keep the car on the straight and narrow. Predictably, the system worked a treated, although it can be tough to trust a machine in that type of situation.

After allowing the Vitara S to flex its muscles off-road, it was time to jump in to the daddy of rugged off-roaders – the Jimny. Sold since the dinosaurs were around – or 1998 to be more precise – the Jimny has stood the test in a world that has seemingly passed it by. It features very little kit and it’s about as refined as a shed, but none of that really matters to those that buy the cheery-faced, pint-sized 4×4. No, what they care about is how good it is off-road, and although on the face of it the Jimny looks a bit of a novelty with it’s big square headlamps and it’s random bonnet scoop, this a serious off-roader. Fitted with Suzuki’s ALLGRIP Pro, you get a sense this can take on the world, even though the model tested was driven on standard tyres and not chunk knobblies. However, it does have a low range gearbox and a locking differential to tackle whatever is thrown it.

The 1.3 litre naturally aspirated petrol may not offer a lot of power – 79bhp to be precise – but that doesn’t mean you’ll find yourself rolling backwards when you encounter a hill with an serious incline. In fact, it will attack it like it a Scrappy Doo ‘Lemme Me At ‘Em’ kind of gusto, leaving you rather amazed in the process. One of the keys to the Jimny’s success is its short wheelbase, and also the fact it weighs than an MX-5. No, it really does.

On the jagged trails the car bounced from side-to-side with gay abandon and although it was as I put it “a bit bumpy” it was rather good fun. I’m not too sure how Kevin felt about it though as his head was swinging left to right like an overactive pendulum. Reports say that he is whiplash is clearing up nicely though. How we didn’t headbutt each other though is beyond me… Apart from getting lost towards the end – not my fault, I promise… – it was fantastic to have another opportunity to take the Jimny off-road as it’s still one of the best off-roaders money can buy despite remaining virtually the same since 1998.

All-in-all, it was good fun trying out Suzuki’s ALLGRIP products and although I wasn’t able to squeeze the Ignis in to the day’s tightly packed schedule, it was it was a great opportunity to see what Suzuki’s ALLGRIP can do when you throw a fair amount of dirt at it. Big thanks to Suzuki for inviting me, and to Kevin Haggarthy for sharing his wealth of knowledge with me.