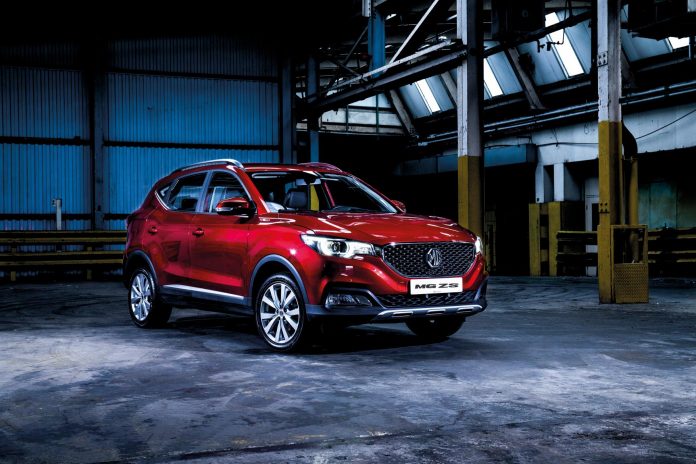 It feels like a long time ago since I saw the public unveiling of the new MG ZS at this year’s London Motor Show. In fact, back then it had a different name. It the XS, but that was then and this is now. The British brand has today revealed details of the new model, which will be available to order as of the 1st of November and will join the pre-existing MG GS in the brand’s SUV line-up.

Yes, it seems as if there is a brand new SUV coming out everyday, so the MG better be bringing something attractive to the overcrowded SUV table. And it has, because this will easily be one of the most affordable SUVs money can buy. It starts from just £12,495, which makes it £2,500 cheaper than an equivalent Nissan Juke. It’s also a better looking car if you ask me, although I will concede that the styling isn’t overly original. The front headlights remind me of the Mazda CX-3 – so does the tri coat paintjob – , and the front grille looks like it was raided from Jag’s leftover cupboard.

On the flip side, it’s not a bad looking motor, especially if you factor in the low price. As well as handsome proportions, it comes with a good level of kit. Depending on what model you go for, buyers will be able to enjoy features such as an “industry leading” 8 inch touchscreen that offers DAB radio, Apple CarPlay, and in the case of the range-topping Exclusive model, sat nav and rear facing camera.

Watch: Q and A with MG’s Matthew Cheyne

Cruise control and air conditioning also come as standard, as does a 7 year warranty, which sends out a strong signal of intent from the brand. I suppose that comes as little surprise, as MG was recently praised for its reliability via a WhatCar? survey. The Excite and Exclusive models also come as standard with a choice of three steering modes.

‘Normal’ does what it says on the tin and will offer the best of the both worlds, whereas ‘Urban’ makes everything nice and light, which will come in handy when driving in around town. ‘Dynamic’ is at the other end of spectrum, offering a heavier setup for faster driving speeds. The car itself has been developed on UK roads, so it should be up to the task of dealing with some of our simply shoddy roads. As well well as the UK, the new ZS has been tested in regions such as Spain and Sweden in extreme temperatures to make sure it is to the test of time.

How spacious is it?

One of the main factors for buying an SUV will be space, even if it’s a compact variant. So you’ll be glad to hear that the new ZS offers around 55mm additional rear shoulder room and 80mm rear headroom than the segment average. The boot offers a very useful 448 litres, which is almost 100 more that the Nissan Juke, Mazda CX-3 and Ford Ecosport can offer. It also offers a split level to the boot for better versatility.

Two engines will be on offer in MG’s new compact SUV, both of which are a petrol, so diesel buyers will need to look elsewhere. Buyers can either have the naturally aspirated 1.5 litre petrol that is used in the MG3, which is mated to a 6-speed manual, or a 1.0 litre turbocharged petrol, which is mated to a 6-speed automatic. Full engine stats have not been confirmed yet, but MG has stated that the ZS will be able to hit 62mph in 10.9 seconds.

The new MG ZS will be available to buy from the 1st of November with prices starting from £12,495.