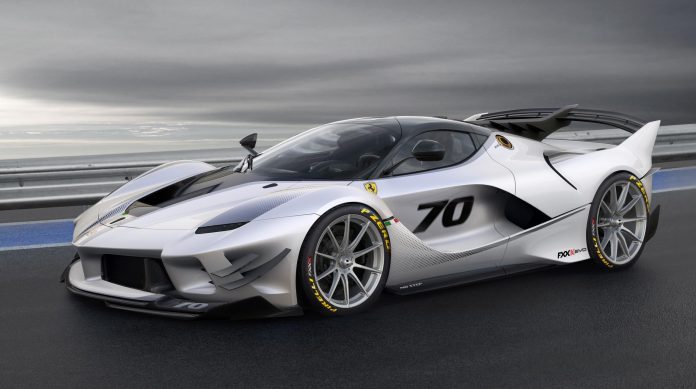 The weekend just gone marked Ferrari’s Finali Mondiali, and what better occasion to choose to lift the covers of the Italian brand’s new ultra-limited run model, the FXX-K Evo. It may have the same power as the ‘standard’ FXX-K, but it will offer considerable more downforce.

Good question. You’ll note that there is a new design to the rear spoiler, and that there is not a fixed wing in place of the winglet design used on the original FXX-K. Ferrari states that the twin-profile rear wing will work seamlessly with the active rear spoiler, and a result this track monster is able to produce 640kg of downforce at 124mph and a whopping 830kg at top speed. 10% more downforce is created from the rear and the FXX-K Evo as a whole offers 23% extra downforce coefficient. As well as a new spoiler, the FXX-K Evo also has new bumpers and the by-pass vent in the rear wheelarches have been enlarged for better airflow to the massive rear diffuser. There are vortex generators on the undertray, which are able to deliver a staggering 30% extra downforce compared to the FXX-K. You get the general theme, if it doubt add more downforce. That’s not the only change though – the suspension has also been re-calibrated to adapt it to the car’s new found aero.

Well, the 6.3 litre V12 engine remains untouched so it’s able to offer a total of 1036bhp and 900Nm of torque combined with the electric motor and the HY-KERS system. The actual performance stats are hush-hush, but it’s safe to say it’s fast as FXXK. It’s flipping loud – stood near one that was revving at the Goodwood Festival of Speed, I genuinely thought my eardrums may perforate.

There is also a new steering wheel, which is the closest thing to something you’ll find in a proper race-ready Ferrari. On it, there is now the KERS Manettino to improve both control of that system and overall ergonomics. The rear video camera screen has been enlarged to 6.5″ screen to give better visibility of what’s behind the driver, which let’s face it, is likely to be anything that the FXX-K is racing. The new, enlarged display also shows data from a new telemetry system with clearer, more direct performance parameter and car status readouts. The driver can also check the KERS status and the times being produced by selecting from the various screen options available.

Like the performance, that has been kept secret, and it’s not a car you can simply go out and buy. Like other exclusive Ferrari models, potential owners will be invited to buy one, and it’s very likely the cost will include at least seven figures. So if by chance you happen to see one, be sure to take a picture because it certainly won’t be everyday you see one. Oh, and if the engine is on, be sure to have earplugs too.