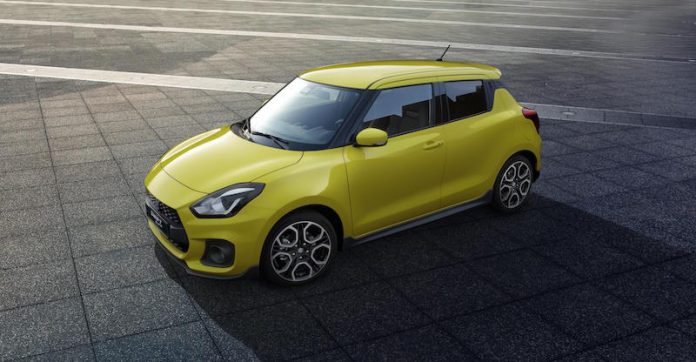 I had quite a soft spot for the last Suzuki Swift Sport, but then again so did quite a few. It was a ho- sorry, warm hatchback that was more about the way it drove rather than out-and-out power. It felt a bit old school in the way it drove, but in a good way. Because of its lack of real oomph, many – including myself – would deem the Swift Sport as a warm hatch as opposed to a hot one. Suzuki is keen to change this.

This is how the Japanese brand describes its new Swift Sport compared to its new one and it’s clear that this car is here to be counted. Suzuki also states the new model is now a “genuine hot hatch”. Ok then, so what is it packing underneath that lemon-coloured bonnet? As predicted, the naturally aspirated 1.6 litre petrol engine has gone, and in its place is the 1.4 litre turbocharged BoosterJet as used in the Vitara S.

That engine is most definitely good fun in that car, so I imagine it will do wonders in the little Swift. The addition of the turbo means that there is more torque compared to the out going model, 70Nm more to be precise. This puts the total figure up to 230Nm, but the overall power still won’t worry the likes of the Ford Fiesta ST. 138bhp is produced from this engine, which by no means massive, but it is a bit more than the last model. This power is fed through to a 6-speed manual, which has been refined to give a better shift action. The car is also 80kg lighter, meaning it has the kerb weight of just 970kg – less than a Mazda MX-5. As a result, the performance has improved. 0-62 comes in 8.1 seconds and the car will then run out of puff at 130mph. It’s not the fastest hatch going, but if the last model has proved anything, it’s that you don’t need a lot of power to have fun.

I’ve driven the previous-gen Swift Sport and at no point did the lack of power grate. Granted, I don’t know how long I could own one before I was itching for something else, but I’d like to think it would keep satisfied.

The handling was one of the previous Sport’s strongest areas, and that is why the lack of power was forgiven. Not content with what the previous model, the design team have improved the suspension so the new model will handle even better than before. The front suspension uses the same shock absorbers as before, but the thickness of the stabiliser joints has been increased, plus the wheel hub and wheel bearings have been made in to single unit. This means there is now a 15% increase in camber rigidity when cornering. At the rear, the suspension has been specially developed for the new Swift Sport and the trailing arm has been exclusively designed for this model in mind. Like the front, the camber rigidity at the back has been improved as well, so you should be able to hit every apex with no excuses in the new Sport.

I’m a big fan of the styling of the new Swift in general, but the Sport needs to have a more aggressive stance of course. Just look at that pouting face, it’s a Chihuahua that wants to act as if it’s a German Shepherd. It’s front bumper bulges with intent and the back features a double exhaust – a must for any serious sporty hatch. Another must are big wheels, and thankfully the Swift Sport is able to deliver on this front too with 17″ shoes on each corner. Speaking of the wheels, the wheelbase is 20mm longer than the previous Sport model, plus the body has been lowered by 15mm and it’s 40mm wider. This helps to give it a more athletic stance and I have to say it looks good. I personally wouldn’t have it in the Champion Yellow though, but I can understand why Suzuki chose it. This is because it’s been inspired by colour used on the Suzuki Works Rally Car that competed in the Junior World Rally Championship.

One of the other things that made the previous Swift Sport popular was the fact that it offered good value for money. The price and specification is yet to be fully announced, but like the standard model, the Sport will offer safety features such as lane departure warning, adaptive cruise control, weaving alert function, radar brake support and high beam assist. Inside the cabin you will find semi-bucket sports seats as well as flat-bottom steering wheel, and of course, plenty of red stitching. A 7″ touchscreen will come as standard with navigation and smartphone connectivity. Expect other features to cross over from the range-topping SZ5 model, meaning you will get a fair amount of bang for your buck.

The price for the new car has not been announced yet, but the car is set to go on sale in the UK next year. I’m definitely excited about the new Swift Sport, although I’d argue it’s still not a full fat hot hatch. It should still be able to offer some full fat fun though!