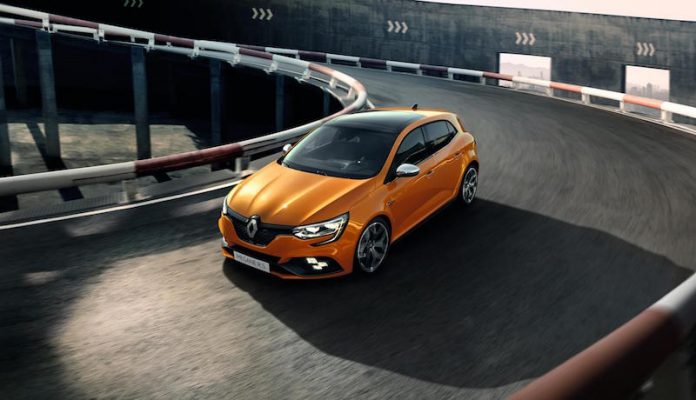 If you’re a hot hatch fan like me, then you will know that now is a great time to be alive. I can’t really remember a time where we had such a plethora of new and sparkly hot hatches coming one after an after. Today there is another fast bit of metal to join the crowd, and one I almost forgot about – I know, shame on me. It is of course the new Mégane RS. The new car features a new engine, a choice of two transmissions and four-wheel steering.

With it being a hot hatch, the first thing we all want to know is how fast it goes. However, the signs aren’t overly promising at first glance. Fitted under the bonnet of the new Mégane RS is a 1.8 litre turbocharged engine which produces…276bhp. That is certainly not slow, but it’s not quite enough to keep up with the new Civic Type R, and the Leon Cupra 300, but that’s more power compared to the latest Golf GTI.

As well as 276bhp, the new engine is able to produce 390Nm of torque, but if you want more power you can opt for the Trophy model, which will come further down the line. This will muster 296bhp and 400Nm of torque. Like previous models, there will be a choice of either a ‘Sport’ or ‘Cup’ chassis as well as the Tophy. The Sport will be the most compliant on road where as the Cup will be more track focused and will come with a limited slip diff.

Hoorah, A Choice Of Gearboxes!

One of the biggest gripes I have with the current Clio RS is the fact that Renault has stubbornly given it an automatic gearbox with no option to have a more driver-focused manual. Thankfully the French brand will give buyers the choice to either have a 6-speed automatic, or a 6-speed manual – praise the lord! The performance figures for either set up are yet to be announced, I’d be surprised if it’s anything more than 6.0 seconds.

The Mégane RS may not be the fastest in its segment, but it makes up for that by offering something that is a first in the hot hatch world. It’s Renault’s 4CONTROL system, and what that means in short is that the car will have four-wheel steering, which gives this French pocket rocket an added level of agility. This also makes the car more manoeuvrable in town, plus it makes the car more stable at higher speeds. As well as the 4CONTROL system, which will allow the new Mégane RS to corner better, the Renault Sport team has also made some other changes to ensure the drive is as dynamic as possible. Front and rear hydraulic compression stops, a feature inspired by motorsport, have been installed in to give better damping qualities and also to offer better efficiency for the chassis. The PerfoHub independent steering axis front suspension has been redesigned to make it stiffer than before, which will mean better handling.

Any hot hatch should be able to stand out from its humdrum siblings in the model range, otherwise it seems a bit of a wasted exercise if you ask me, but that is subjective of course. Thankfully, the new Mégane RS does well in this department. Compared to the GT model, the RS boasts 60mm wider wings at the front, and 45mm wider at the rear. As is the way, the traditional Renault Sport Liquid Yellow is ever-present, but there is now a new Volcanic Orange paintwork available. Either colour will be complimented by a model specific front grille with wider air intakes and a satin Gun Metal Grey F1 style blade sitting underneath. Either side of the front you will find LED running lights inspired by a chequered flag, a feature that was first seen on the Clio R.S.16. The car will either sit on 18″ or 19″ alloy wheels depending on what the buyer opts for and at the back there is the familiar central exhaust pipe that sits above the F1-inspired diffusor. Typically, the inside of the car follows suit, and once in there you will find sport seats which can either be trimmed in a ‘carbon fibre weave’ or alcantara. Both the pedals and the gear lever are made from bespoke aluminium, and finishing the inside is charcoal grey theme which is contrasted by red top stitching. Renault’s R-Link infotainment will play host to the usual entertainment and connectivity features, but there are also some clever things as well. For example, you have the R.S. Monitor, which is able to track real time performance when you driving on the track, and there is even an ‘Expert’ mode which enables you to connect a smartphone or an action camera to the system to film your shenanigans. The footage can then be played back with analytic data accompanying it, ready for you to share with your friends and bore them senseless.
There will be a choice of five driving modes to choose from as well, so there should be a setting to suit each eventuality. These range from the sedate ‘comfort’ mode, all the way through to the hardcore ‘Race’ mode. Sitting in between them you have ‘Normal’ and ‘Sport’, plus you have ‘Perso’, which allows you to personalise your settings for a more bespoke driving experience.

The new Mégane RS won’t go on sale until spring 2018, with prices yet to be announced.