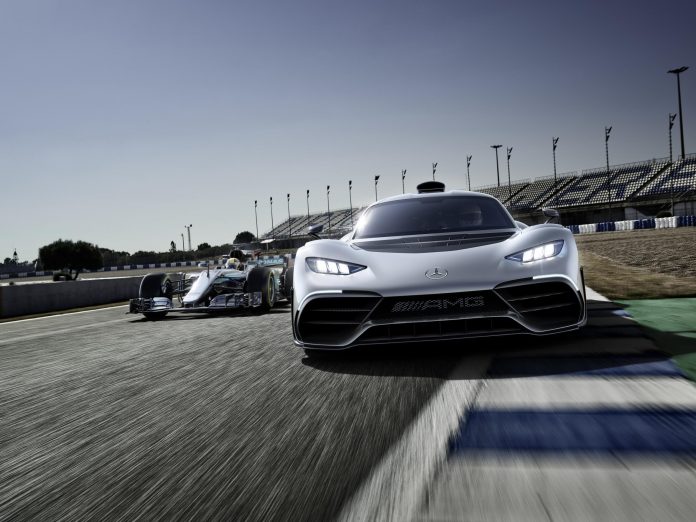 The Frankfurt Motor Show has already seen it’s fair share of reveals, but this is definitely one of the biggest ones – the new Mercedes-AMG Project One. There is a lot of buzz around this car and it’s clear to see why. The amount of work and engineering that has gone in to making this car is frankly astounding. Reading the press release felt about technical as university science lecture, but with good reason – this car has some serious technology.

Much like the Aston Martin Valkyrie, the Project One will be hybrid, and it’s also inspired by Formula One. In fact, the Project One has the same engine as the Mercedes-AMG Petronas F1 car, but that’s not to say you will need a team of mechanics to follow you, nor will you need to find petrol station that supplies racing fuel – heads up, they don’t. So what we have here is a 1.6 litre turbocharged V6 engine, which works with four electric motors to deliver a total of 1,000hp.

Those in the know, will quickly realise this is less powerful then the Valkyrie, but let’s not forget that makes with a V12 as well as battery power. Still, the Project One is not what you would call slow, far from it. With the engine and batteries combined, you’re looking at a spring to 200km/h – or 124mph – in under 6 seconds. Top speed? Mercedes-AMG has stated that the Project One will go beyond 217mph. So yes, it is rather brisk.

Working with that F1 engine are four electric motors, which all do different things. Two of them work to drive the front wheels and produce 120kW (161bhp) each, another is integrated in to the turbocharger and the fourth is installed directly to the engine with a link to the crankcase. All four wheels are driven by the system, meaning it uses Merc’s 4MATIC system and the power is fed through to an 8-speed automatic gearbox that has been developed from scratch.

As mentioned, the press release was rather technical to say the least, and it was also rather extensive. So I won’t go through all of it, but there are some things I want to highlight as being rather amazing and impressive. Firstly, the electric motors are able to spin at a colossal 50,000 rpm (each). To put that in to some sort of perspective, a state of the art electric motor would spin at 20,000rpm – that’s less than half in case you hadn’t noticed.

The Germans say that the electric turbocharger has no lag whatsoever, and is able to respond quicker than a naturally aspirated V8, although I’d argue a V8 would sound better – just sayin’. The turbocharger itself is rather clever, because it can either provide the car with more power, but it’s also able to store the energy in to the battery instead, which will increase range. Speaking of efficiency, if the car is driven with both the engine and battery in use, the car will revert back to electric only when the driver lifts off and lets the car coast. The car is also able to recuperate up to 80% of its braking energy so it can be fed back in the battery, which again gives greater efficiency. Moving away from what makes the car go, the Project One sits on specially developed 19″ alloys, which has been designed to help the hypercar be more aerodynamic, plus each spoke as three flat ventilation slots to help push air through to big ceramic brakes and keep them cool. The alloys themselves are shod in Michelin Pilot Sport Cup 2 tyres, which has been exclusively designed for the Project One.

Push rod suspension has been used for the new Project One, which should come as little surprise given the hypercar’s F1 inspired design. Multi-link designs are used at both front and rear, with Mercedes-AMG stating that it’s able to eliminate body roll in the corners, but it should still prove comfortable for road use. The Project One is made up of a carbon fibre monocoque chassis, which will keep the weight down, but the weight of the car is yet to be declared… A Cockpit Inspired By Formula One

Step inside the cabin and you will find a layout that is quickly going to remind you of the motorsport that inspired the car – F1 of course. The steering wheel looks as if it’s been lifted straight out of race car. Unlike a Formula 1 car though, you can take a passenger along with you for the thrill ride. The seats are integrated in to the monocoque chassis, but the back rests can be adjusted for better comfort.

The seat itself may not move, but drivers should still be able to find a good driving position as both the steering wheel and the pedals are adjustable. The dash is very much driver focused as it features very little that is going to distract the driver, which is just as well in a car like this.

Instead you get two large displays, which are able to display driver information as well as offering connectivity options. There also displays to show you what is behind you, as the door mirrors have gone for better aerodynamics, and have been replaced with cameras instead. Don’t think you will have to forgo creature comforts though, as the Project One will come standard with air conditioning and electric windows.

Only 275 models will be made though, at a price of €2.27 million. Production starts next year and deliveries will commence as of 2019.