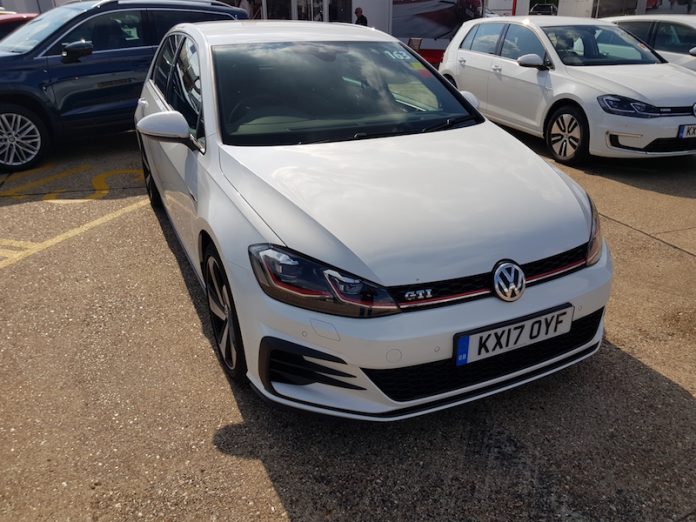 This is my last SMMT Test Day 2017 article and I finish with quite possibly the quintessential hot hatchback- the Volkswagen Golf GTI. I’ll let you in on a secret, I’ve never driven a Golf GTI so I was rather looking forward to this. There was a Mk1 there as well, but sadly that was a static display only… So, with that in mind, let’s switch the attention back to its modern counterpart.

It’s no secret that the GTI is not the fastest hot hatch money can buy – see the Audi RS3 for that – but the Golf’s 2.0 litre engine still offers a respectable 227bhp, which is mated to the front wheels via either a 6-speed manual or a 7-speed DSG gearbox. The model tested had the manual thankfully – a hot hatch needs to have a manual, end of. As I said, the Golf GTI hasn’t got the highest amount of performance one can gain from a hot hatch, but it will still hit 62mph in 6.5 seconds with a top speed just over 150mph. But what’s it like to drive? Well impressive to put it simply. It doesn’t have the kind of fanfare or savagery of a car such as the Focus RS, but it still has a nice throttle response and the car feels solid as a drum. The gearchanges are as you’d expect, they’re sweet and short, making the GTI’s acceleration satisfying, plus the gearknob has the iconic ‘golf ball’ design. I don’t know why, but I think this is really cool. The steering wheel was trimmed in leather with red stitching and a flat bottom, but other than that, the cabin is still rather standard.

Some may call it boring, but I think it matches the Golf well as it’s well measured and it’s tasteful. So if you’re looking for an in-your-face interior similar to a Civic Type R, this will not be for you. The steering wheel is pleasant to hold and it’s got a decent weight to it. Through the corners the Golf feels composed, it’s balanced and offers a high amount of grip. What I love about the Golf GTI is that does what it does with minimal fuss and although it’s not as exciting as a Focus RS or a Civic Type R, it’s still definitely engaging.

But unlike the Focus RS and the Civic Type R, it has a more comfortable ride and this has to be the one of the easiest hot hatches to live with on a daily basis. That’s not to say the other two will break your back, but you get a sense you can drive the Golf GTI day-to-day and at normal speeds you’ll forget it’s even a hot hatch. That may not be for everyone, I for example want to know I’m sat in a hot hatch, but for someone who is a bit more…mature shall we say, the Golf GTI is bound to be a reliable companion. So, the Golf GTI – it’s tasteful, comfortable, well-rounded, but still engaging and fast to drive. The engine note is pretty good as well, better than I was expecting in fact. There is plenty to like about the Golf GTI and it’s little wonder why it has been so successful for so long. I still think I’d personally want something spicier, but if I ended up with a Golf GTI I certainly wouldn’t be disappointed.