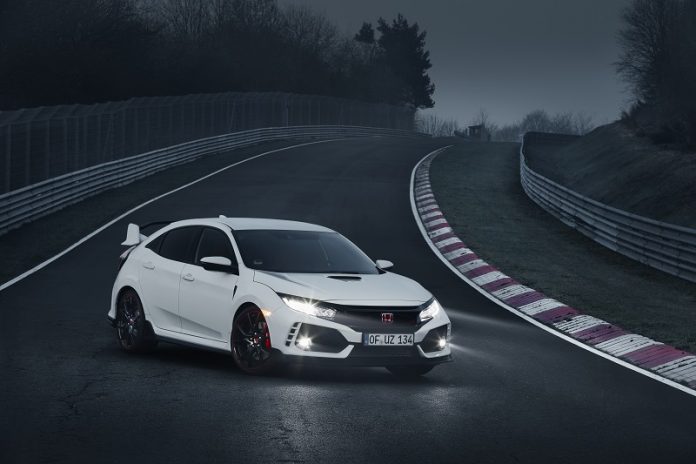 There was much fanfare when the Volkswagen Golf GTI Clubsport S broke the lap record for a front-wheel drive car last year. 7 minutes and 49.21 seconds was the time originally set by the German, but not content with that, the car then beat its own record towards the end of last year with a time 7 minutes 47.19 seconds. As you can imagine, the Japanese weren’t pleased. You see, the previous Civic Type R had held this record, so it seemed natural that the new model would return to the Green Hell. The Honda Civic Type R hit the German tarmac once more, and thanks to its 4-cylinder 316bhp/400Nm unit, it comfortably beat the time set by ze Germans. In fact, not only did Honda beat the time, but you get a sense that it pulled VW’s pants down as well. The time set by the aggressive Type R was almost 4 seconds quicker. To be precise, the time set was 7:43.8. This was all done with a model built with the same techinical specifications as what customers will get, so there is no trickery here, no smoke and mirrors.

Ryuichi Kijima, the lead chassis engineer explained how the new model has the credentials to be the fastes front-wheel drive around the Nurburgring; “The cornering speed achieved in the new Type R is higher because the car features a wider track and tyres, a longer wheelbase, new multi-link suspension in the rear and optimised aerodynamics that improves stability, ” said Kijima-san. “For example, drivers typically enter the corner after Metzgesfeld at around 150 km/h. Even at this medium-speed corner, the speed is around 10 km/h higher due to the new Type R’s excellent stability. So, with improved cornering performance, we can increase the speed throughout the lap, helping the new Type R to achieve a much quicker lap time.”

Production for the new Honda Civic Type R will start this summer.