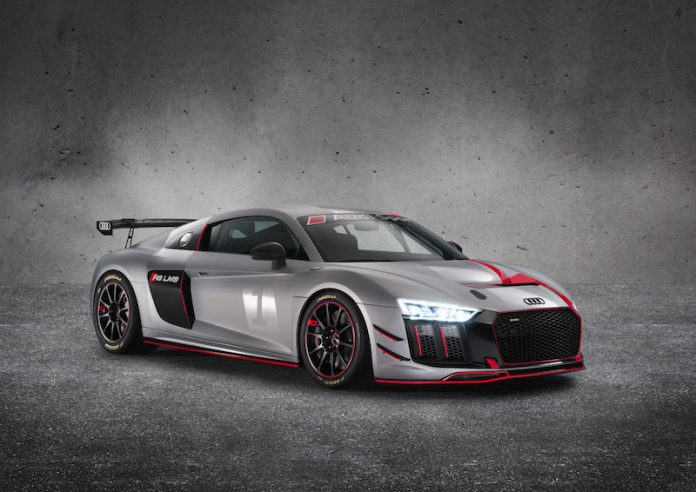 Have you ever looked at the new Audi R8 and thought, “if only it looked more aggressive”? No, I didn’t think so, but that’s exactly what you can expect from the German brand’s new LMS GT4 model. It’s made purely for racing, so sadly you will never see one on the road – well not legally anyway.

This new model, which was revealed in New York earlier this week, is derived from the road-going V10 coupé and is aimed at customers that want the ultimate Audi racing experience – and those who want to empty their wallets. The LMS GT4 shares 60% of its components with its road-legal sibling and is also put together on the same production facility.

Under the hood, you can expect to find a race modified V10 engine which will be able to hold up to 495 horses, depending on the version. The car is still in its development stage, so Audi hasn’t thrown out any performance figures yet, but you can expect 0-62 to be around 3 seconds or less and a top speed over 200mph. The price also hasn’t been announced but we all know motorsport is not a poor man’s game, so expect quite a few zeros… “13 racing series in which GT4 models can compete worldwide already exist today worldwide,” says Stephan Winkelmann, Managing Director of Audi Sport GmbH. “Audi Sport GmbH is one of the leading manufacturers offering cars in the GT3 and TCR customer sport categories. Now we’re targeting the GT4 class at exactly the right time. These fast-growing business segments and the DNA shared by our race cars and production vehicles underscore our ambition to become a true global player in the high-performance league.”