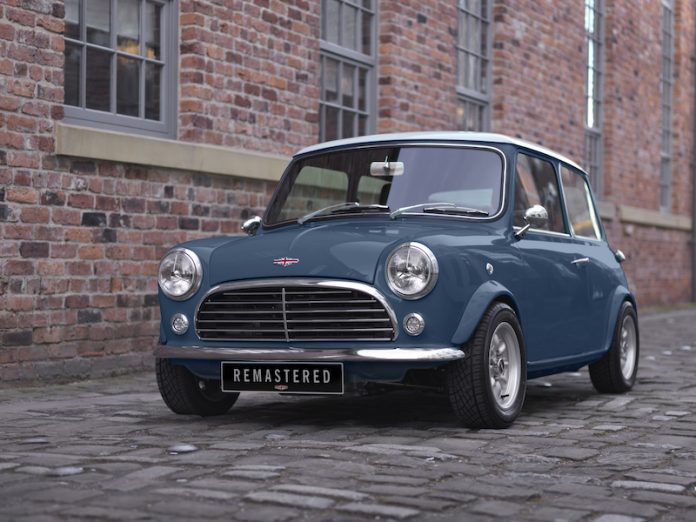 The Mini. A car that simply iconic and synonymous with British culture. However the new Mini is not loved by everyone, especially as it now has a German mistress. The car has also grown quite significantly, meaning that the ‘Mini’ badge seems somewhat ironic. Have you seen the Countryman? It’s practically a behemoth!

Do you know how you can buy old songs and films that have been remastered? Well this David Brown Mini is exactly the same thing – it’s like the original, but brought into the 21st century. Following on from the brand’s DB5 inspired Speedback GT, the Mini Remastered features familiar retro styling, but with modern convenience.

Under the bonnet you’ll find a 1.3 litre engine capable of 78bhp, which is mated to a four-speed gearbox. The chassis and body panels are brand new and de-seamed, meaning the shutlines are of modern standards. Also modern is the infotainment system in the cabin that offers features smartphone integration.

The Mini Remastered also features keyless entry, USB ports, remote central locking and a four speaker sound system. Each model will also come with a bespoke leather-lined luggage space and a petrol tank which is finished in the same colour as the contrasting roof colour. Speaking of paint, each Mini Remastered should come with a perfect paint job, as four-week paint process is used to apply whatever the colour customers will choose. Michelle Gay, Brand & Business Manager at David Brown Automotive: “We are delighted to be exhibiting at The London Motor Show for a second year. We received a fantastic response to Speedback GT last year and are hugely excited to be making the first public debut in the UK of our second model, Mini Remastered, which is the ultimate modern classic for city driving.”

The new Mini Remastered will go on show at this year’s London Motor Show, so I look forward to seeing it in real life.