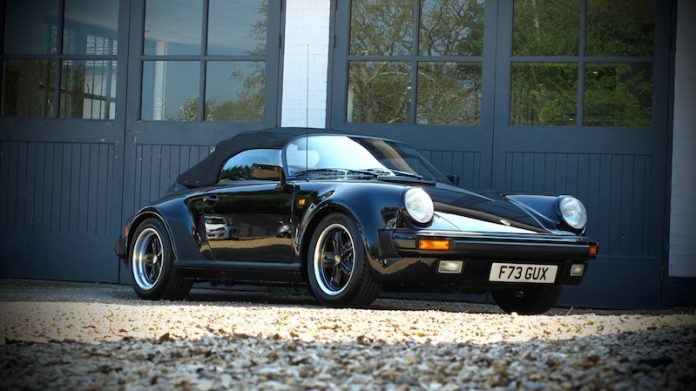 It’s no secret that classic Porsches are worth a fair bit of money nowadays and as it stands, their value will only increase. Such a car is to be sold by Silverstone Auctions at its May sale, which takes place on the 13th. Of May obviously.

The model in question is a rather dashing (and rare) 911 Speedster from 1989. The reason it’s rare is because only 139 were produced in right hand drive, plus it’s a low mileage example, with just 5,590 miles on the clock. That’s just over 200 miles an average per year. The model was designed to reflect the styling of the 356 Speedster from the 50s, meaning it has a raked windscreen which is three inches lower, plus it has the  ‘double hump’ clamshell fibreglass tonneau cover

It’s only had one owner from new, in Australia of all places. It then made the long trip to Blighty in 2014 after all the necessary export checks, etc. had been done. Throughout its lifetime, it’s acquired 21 main dealer services, so although it’s not covered a great deal of miles, it’s been well looked after.

This level of care does come with a price though. The estimate for this 80s Porsche is between £145,000 to £165,000. The car will of course with all the paperwork, as well as spare keys, the original Porsche leather wallet and even the demo cassette for the Blaupunkt audio system.

Speaking on the car ahead of the sale, Managing Director of Silverstone Auctions, Nick Whale, said: “A ‘triple black’ wide-bodied, right-hand drive Speedster is a rare thing of great beauty and in this condition, an exceptional find that is highly collectable. Silverstone Auctions are very proud to be offering the car for public sale.”