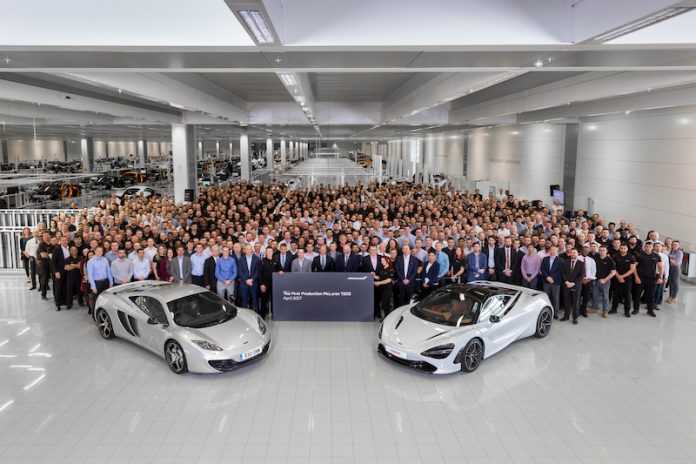 It’s a car that has divided petrolheads with it’s unique styling, thanks to its ‘eye-socket’ headlight design. It’s also a car that is very important to British brand McLaren, as it marks the next generation of the Super Series.

After enjoying its global debut at the Geneva Motor Show, the 720S has now gone in full production with the first model – finished in Glacier White – has now rolled off the Woking production line. This now of course means that the previous generation will now be entered in to the history books and will no longer be produced after more than 7,000 were made.

“The new McLaren 720S entering volume production is a momentous occasion for McLaren Automotive, marking the first time since the company was formed in 2010 that we have replaced a model family with an all-new generation,” commented Mike Flewitt, Chief Executive Officer, McLaren Automotive, speaking at a short ceremony at the McLaren Production Centre to mark the completion of the Job #1 car.

“Customer interest in the new McLaren 720S following its unveiling in March at the Geneva International Motor Show has significantly exceeded our expectations and we are bidding farewell to the first-generation Super Series in the knowledge that we have a successor that raises limits in the supercar segment to new heights.”

So, whether you like the look of it or not, you cannot deny its technical credentials. Now the car is in full production, you may be lucky – or unlucky if you don’t like the looks – to see one on the road in the next few months.