A few months ago, I tested the Ford Focus ST Estate, and at the time, I said that it’s not always easy to make a car fast as well as practical. The Focus ST packed quite the punch, but the car in this review has taken things to the next level. It’s the new Audi S6 Avant, a rich dollop of diesel V6 performance wrapped up in a stylish and premium package. That’s right, the S6 is now a diesel – I’m not sure Audi got the memo. 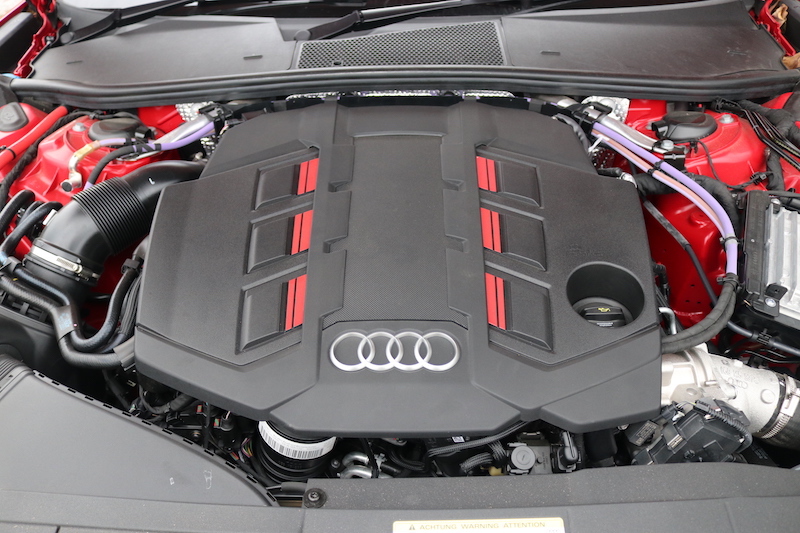 Let’s get straight to the driving

Right, let’s not muck about – this is a performance estate, so let’s get right on to the driving. As mentioned, the fifth generation S6 has done away with the 4.0 litre V8 petrol and in its place, a 3.0 litre V6 diesel has been fitted. Sadly, it offers less horsepower; with a power out of 349, it’s around 100 less than the V8. Oh dear. It’s not all bad, though, as this powerplant offers a barnstorming 700Nm of torque – that’s 150 more than before! If you prefer that in lb ft, that’s 516 compared 406. 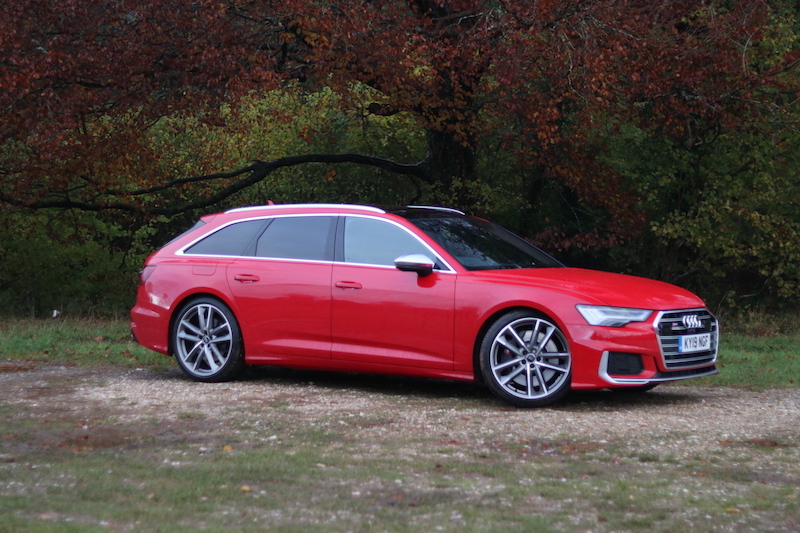 This brawny power is delivered to all four wheels via Audi’s iconic quattro all wheel drive system and an 8-speed tiptronic automatic transmission. 0-62 is dealt with in just 5.1 seconds, which is very impressive when you consider this car is around two tonnes. The top speed, as you would expect, is limited to 155mph. However, I’m sure you’ll agree, that’s plenty. 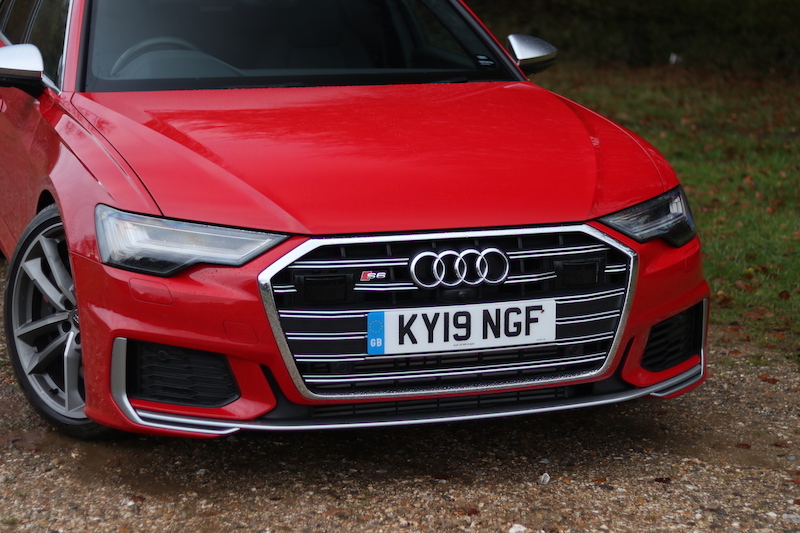 If you’re really bothered, the S6 also has a 48-volt mild hybrid system to give improved acceleration, improved efficiency, and of course, better fuel economy with lower emissions. There’s also an EPC – that’s an electrically powered compressor for those not in the know. This clever bit of technology makes use of an electric superchager that provides a repeatable boost function when accelerating. In simple terms, it means you shouldn’t get any turbo lag in the S6. 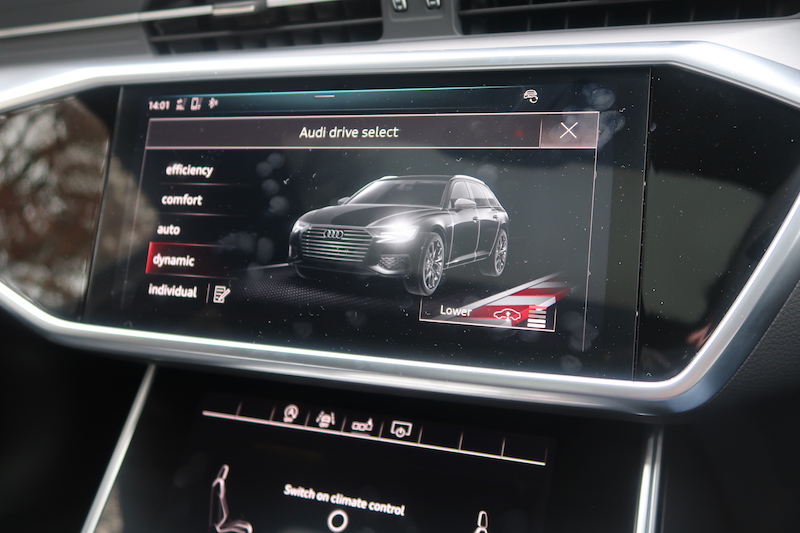 To drive, it feels very muscular, and responsive – tickle the accelerator and you’ll soon be riding a wave of torque as the V6 diesel pins you to the back of these sumptuous valcona leather seats. The tiptronic gearbox works seamlessly, and you barely notice the changes as they happen. 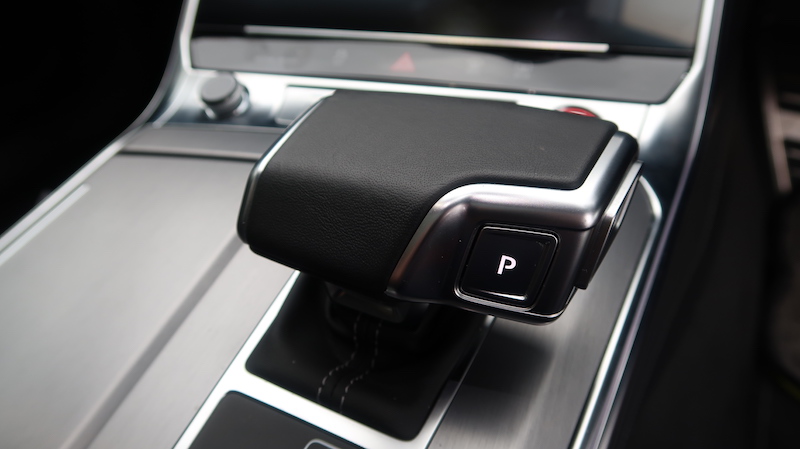 As you would expect from any modern performance car, there’s a choice of driving modes. For the S6, there’s a a choice between Comfort, Auto, Dynamic, Efficiency and Individual. These are all pretty self explanatory of course, and let’s face it, Dynamic is the place to be. It transforms this car in to quite the beast, but because this model has the optional adaptive air suspension, it’s still compliant and forgiving in its damping. 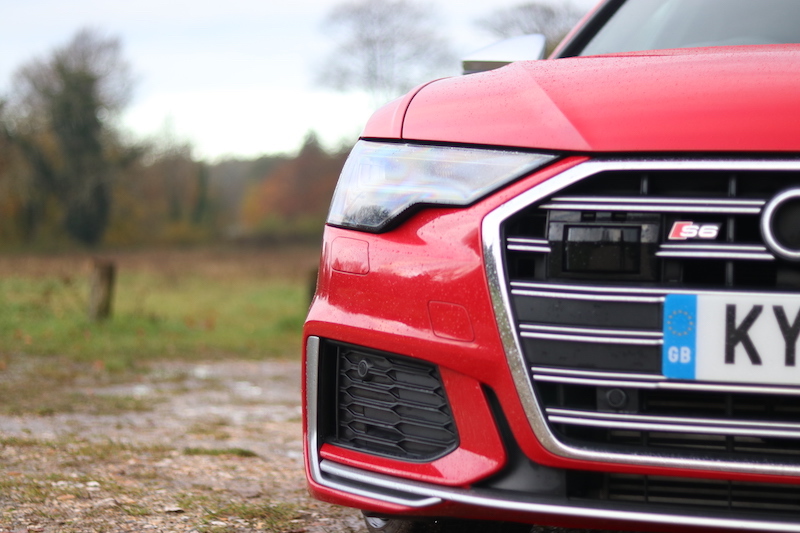 The air suspension also works alongside the drive modes, so the ride gets even more comfy and squishy when you pop the car in to Comfort. You can also raise and lower the ride height as well. So you can ride high on a cloud of comfort, or you can hunker the car down for full attack mode.

Does it suffer from Big-Audi-Itis?

So, it’s fast and comfortable to boot, but what happens when you tackle a corner? Big Audis of old have been notorious for being nose heavy and understeery in the corners, so does the new S6 suffer the same fate? Well for starters, the quattro system sends the majority of the power to the rear axle, but in dependent on the situation 70% of the power can be sent to the front wheels, and 85% can be sent to the rear – not at the same time, of course, that would defy physics. 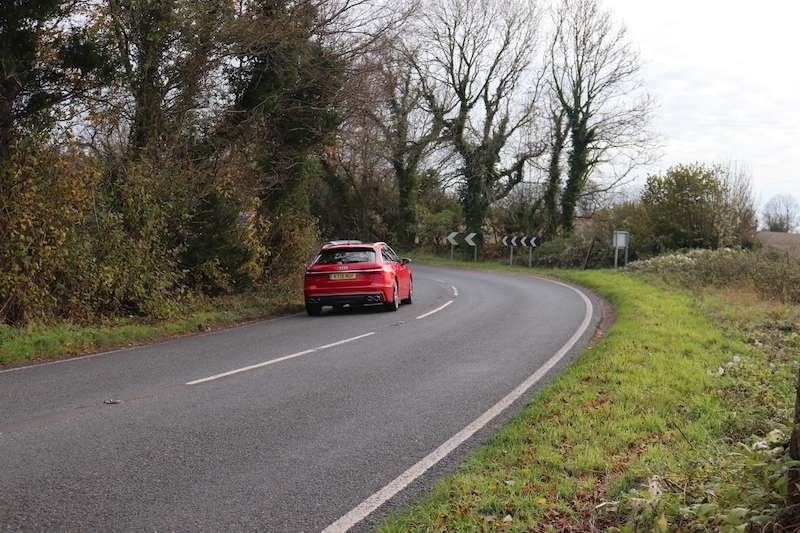 There’s also wheel-selective torque control, which is able to brake the inside wheels when cornering to give better grip, and to offer less slip. On top of that the S6 makes use of progressive steering, which comes as standard, making the steering more direct with as the steering lock becomes greater.

That’s all good and well, but does it actually work?

Yes, it does actually. I’ll be honest, I didn’t notice the four wheel steering straight away, and it’s not as noticeable as, let’s say, a Renault Megane RS, but that is a different kind of car that is also a fair bit lighter as well. Tenuous comparisons aside, the S6 is surprisingly capable in the corners, although it would be quite some stretch to throw around words like ‘nimble’ and ‘agile’. 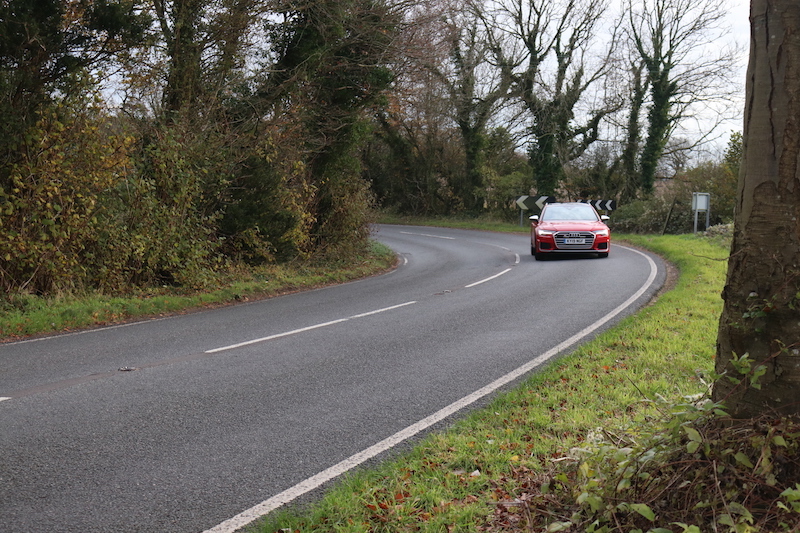 Having said that, the S6 Avant doesn’t wallow about in the corners like a ship in a storm, and there is some genuine fun to be had when the going gets twisty. It’s more entertaining than I thought it’d be if I’m honest, and the chassis is more adjustable in the bends than you may have expected.

If you want to improve the cornering even more you can go for the Dynamic Pack, which adds Dynamic steering, RS Sport Suspension and the quattro sport differential. Oh, it also increases the top speed to 174mph.

It looks the part

The S6 may deliver a knockout blow when it comes to performance, it’s rather easy on the eye. It looks classy and sophisticated as you would expect from an executive car, but at the same time, you can see this is not a mere A6. The car sits 20mm lower, and on big alloys, and the body is more aggressive. There’s also silver wing mirrors to help make this out as one of Audi’s sportier models, and at the rear, you have no less than four exhaust pipes. Hang on a minute, these aren’t real! Oh Audi, that’s not cool.

Step inside the cabin and you’ll find sumptuous leather sports seats, a sporty flat bottomed steering wheel, and when driven at night in dynamic mode, red ambient lighting. As you would expect from an Audi, the interior is very impressive. Every bit of switchgear and trim feels premium and pleasing to the touch.

This is just as well, because it’s not what you’d call cheap

An executive performance car is going to come at a cost, and in the case of the S6, it’s £61,215 for the Saloon and £63,315 for the Avant. Standard features include 20″ alloys, Matrix LED headlights, S body styling, super sports seats with Valcona leather, heated front seats, sports steering wheel, electronically adjustable front seats, virtual cockpit, a 10.1″ touchscreen, a 8.6″ touchscreen, DAB radio, Bluetooth, smartphone connectivity, and navigation.

As with any Audi, though, the list of options is almost endless. This car alone has almost £18,000 worth of options on it. I’m not going to name them all, but just mention a few, this has 21″ alloys, quattro with sports differential, Bang & Olufsen sound system, panoramic sunroof, and adaptive suspension. The car you see here, it will set you back just under £78,000. You better get saving!

Not only is the S6 powerful, but it’s practical thanks to its Estate bodyshape. Open the electric tailgate and you’ll find a boot that offers a capacity of 550 litres with the rear seats up, and almost 1,700 with them folded down. Step in to the rear and you’ll find a good amount of space even if you a taller person like me. Speaking of which, as always, the driver’s seat has been set for my height, and I’m 6 foot 2.

Knee room and leg room is generous, and there’s a good mount of headroom as well. I doubt you’d be able to get three people comfortable in the rear, particularly as you have a large transmission tunnel running down the middle of the car. On the plus side, if the middle seat is kept free those in the rear can make use of the centre armrest for added comfort.

There’s also a bit of storage, as well as two cupholders that fold out in a rather nifty fashion. The climate control extends to the rear, and there’s also two USB ports in the rear, so those in the back can charge their smartphones and tablet on the move.

What do you think of the fake exhaust pipes?

Is this petrol or diesel?

It’s diesel, thanks for asking.

Speaking of diesel, let’s talk about fuel economy. On a combined run, the S6 Avant is able to offer 35.8mpg, and it emits 171g/km of CO2 emissions. This means for the first year of VED, you’ll be required to pay £1280 and BIK – in case you’re lucky enough to have this as a company car – is 37%. 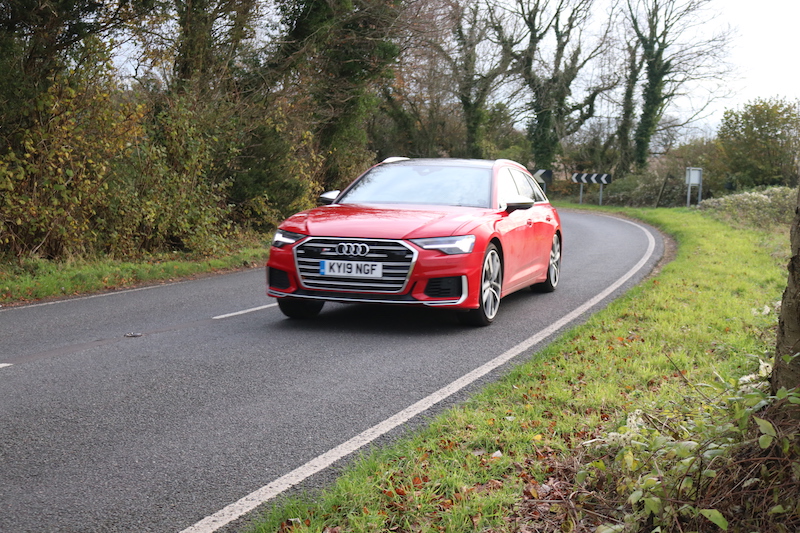 Time to talk about an area that isn’t very exciting, but could well be a very important for some buyers – refinement. Despite the thunderous diesel under the bonnet, and the optional 21″ alloys at each corner, the S6 is a civilised place to be. Slip the car in to comfort and you can quickly imagine easy it would be to cover long distances in this car. The tyres have something called Torus absorbers, which put simply, are foam layers bonded in to rubber to dial out any annoying droning noises to help the inside feel more peaceful. 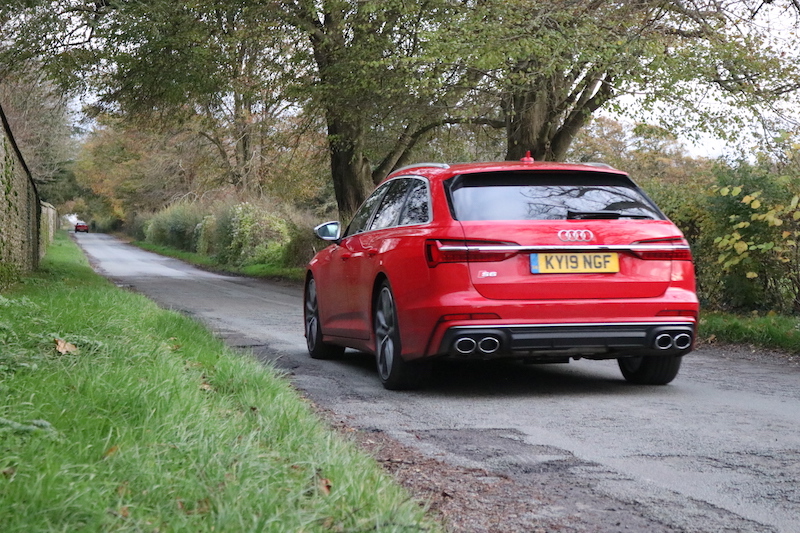 For a device to get around at a good pace in plenty of comfort, generous space and sophisticated style, the Audi S6 Avant does very well. It’s more exciting than I was expecting, and I was genuinely sad to see the car go, which is more than I can say for the TTS, which left me cold. 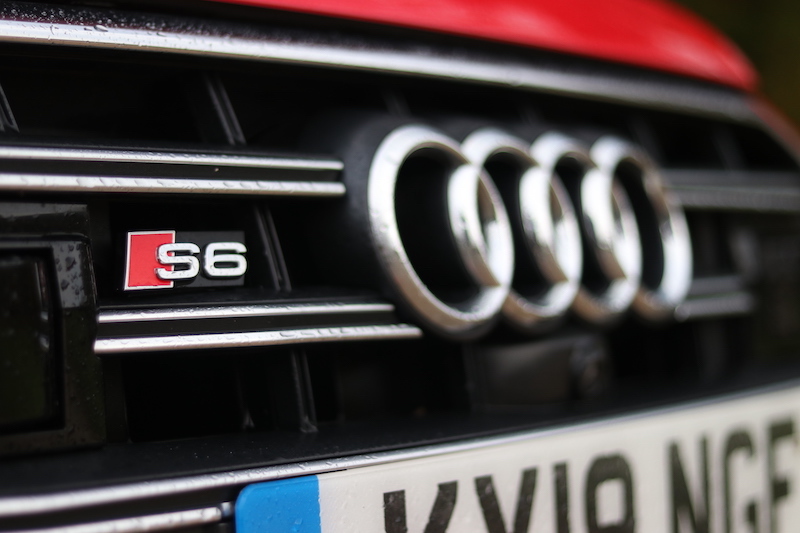 Yes, some of you may be sad that the rumbling V8 petrol has gone, but the diesel engine that has replaced it isn’t exactly a damp squib – quite the opposite. It’s a car that’s bound to tick many boxes, so long as you can afford it. Oh, and don’t go too mad on the options…