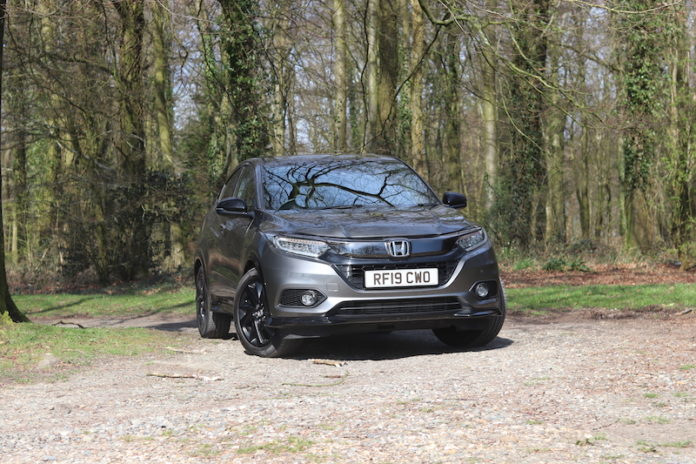 Your typical Honda SUV buyer is likely to be quite a sensible, pragmatic, practical person, so the new HR-V Sport may seem a bit…brash. Look at it, all pumped up, with big alloys and glossy black detailing – doesn’t it look great?! I also like the interior, although I appreciate it may not be for everybody. What I will say, though, is that the cabin doesn’t feel the most modern, but to be fair, this is a facelift model, and the facelift was rather conservative. However, what the facelift has given the HR-V, is the turbocharged 1.5 litre petrol engine, which is a bit of alright.

It offers 182hp along with 240Nm of torque (177 lb ft), which can either be mated to a 6-speed manual or if you have to have an automatic, you can have a CVT, although you’ll get a little less torque. If you have any kind of common sense and you don’t need an automatic, you’ll go for the 6-speed manual. Not only does it make the car cheaper, but it is a fantastic tool in which to change gear. It’s slick, mechanical and it’s enough to put some hot hatches to shame. The HR-V Sport is pretty capable in the corners, thanks to performance dampers, which are bespoke to the Sport model. Yes, there’s still some roll in the corners, but it still feels competent when asked to navigate a series of bends. The steering isn’t alive with communication, but I wouldn’t expect it to be in a car like this, but there’s no real issue with the weight of the steering. There is a downside to the performance dampers, and that is of course a firm ride, although to be fair, it’s not boneshaking. The damping, for the most part, does a decent job of isolating you from the harshness of bumps, but it can be caught out sometimes. The seats are comfortable though, and better still, the front seats are heated as standard.

Let’s speak refinement; the HR-V Sport can be a bit noisy on the move because of the road noise emanating from the stylish 18″ alloys, and the engine can be a bit boomy when worked hard, so this won’t be the most refined car in its class. Mind you, anything with the word ‘Sport’ in the title is unlikely to be the last word in refinement.

Practicality, though, is a different story.

To this point, I’ve approached this car from a performance perspective, but this is an SUV after all, so it does need to be practical. Let’s kick things off with the boot, which offers an impressive 448 litres – more than what you’d find in the nation’s favourite SUV, the Nissan Qashqai. If you need even more space, you can of course fold the rear seats down and by doing so, you’ll liberate 1,473 litres. Better still, the seats fold flat thanks to the magic rear seats that come as standard, which are bound to be useful when transporting bigger items.

Step in to the rear and you’ll find there’s more legroom than you may have expected. As always, the driver’s seat was set for me, I’m 6 ft 2, so I am of course a taller chap. Despite that, I had a load of legroom and knee room, it, however, it’s not all good news. Because of the cars coupe-esque side profile, headroom is going to be a bit tight for those of a taller disposition.

Could you fit three adults in the rear? Potentially, but I think it would be rather snug, although, let’s not forget, this isn’t the largest SUV out there. In the middle there’s a small, but perfectly formed armrest, but sadly it has no cupholders. There are of course doorbins though, as well as a central cupholder, map pockets and also a charging point, which will please those tech savvy variety of rear passengers.

Step in to the front and you’ll find it offers the typical amount of practicality you’d find from any Honda. There’s a healthy amount of cubbyholes, so I doubt you’ll be wanting for more storage, although a sunglasses holder would be welcome.

The HR-V Sport, should be pretty easy to live with, but how easy is it on your wallet?

The Sport is the range-topping version of the HR-V, and one could argue it’s not the best value on the market. It starts from £28,420, and as standard you get features such as 18″ alloys, sport styling, rear privacy glass, double exhaust, LED lights both front and rear, 7″ touchscreen with DAB radio, Bluetooth, navigation, but NO smartphone connectivity, half leather upholstery, heated front seats, dual zone climate control, reversing camera, front and rear parking sensors.

When it comes to safety features, the HR-V Sport has got that covered, offering standard features such as 6 airbags, autonomous emergency braking, high beam assist, traffic sign recognition, and speed limiter. This was enough to secure the HR-V five stars from Euro NCAP, which is bound to give peace of mind for those looking to use the car to move the family about.

Fuel economy, not a sexy subject, but an important one. As you would expect, this version of the HR-V is not going to be the kindest to your bank balance when it comes to consumption. On a combined run Honda states that this engine can offer up to 42.2mpg for the manual gearbox, and 39.2 for the CVT. When fitted to the manual, this 1.5 litre petrol emits 151g/km of CO2, whilst the CVT version emits 163g/km. This means for the first year of VED, you’ll need to pay £210 no matter which gearbox you go for. The naturally aspirated 1.5 litre petrol isn’t much better when it comes to fuel economy, but there is a choice of a 1.6 litre diesel, which offers up to 56.5mpg with much improved of CO2 emissions of 105g/km. However, it’s worth noting that the diesel is not offered in the Sport trim level.

The HR-V sport a quite a hoot to drive, but I fear that it could be a little too niche for some, plus it’s not exactly cheap, either. I still can’t get my head around the fact it hasn’t got smartphone connectivity, but it does offer fantastic practicality, I think it looks quite good as well and it’s a Honda, so it should be reliable as a day is long. The SEAT Arona FR, like the HR-V Sport, is a sporty SUV that is likely to appeal those of a younger generation, but only that, it will probably be more appealing from a common sense perspective. This is because it’s a better looking car – I know, subjective – it has a nicer interior – albeit a little bit sombre – and it also represents better value for money. The FR also has a better choice of engines, although none are as potent as the 1.5 nestling in the HR-V Sport. The Stonic is another SUV that offers a dynamic driving sensation in the small SUV/crossover class, but it’s not as well rounded as the Arona, and not as practical as the HR-V Sport. However, you get KIA’s legendary 7 year warranty as well as decent value, although you’ll need to tick an options box to get extra safety features…