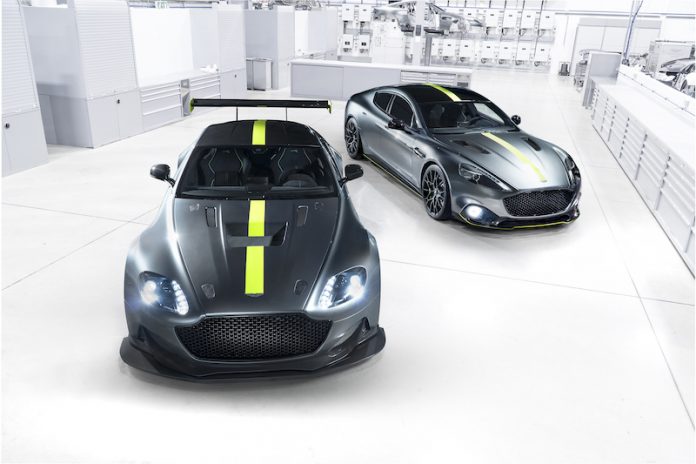 Aston Martin broke big news with the naming of the new race-inspired hypercar, the Valkyrie, but it seems that wasn’t enough. Today, seemingly out of the blue, the British carmaker revealed its new AMR brand, but what exactly is it?

Let’s focus with the model that can be used on the public streets – the Rapide AMR. Powered by a naturally aspirated 6.0 litre V12, this aggressive  four-door produces 592bhp. This means it’s capable of hitting a top speed of 210mph, making it the fastest four-door car in the world. It’s also only 2mph slower than the recently announced McLaren 720S, but unlike the 720S the Rapide can carry people in the back.

It certainly looks the part too, thanks to a large front grille and a visually satisfying Stirling Green paintwork. Sitting on large 21-inch alloys, the Rapide AMR also features a front splitter, side sills, rear diffusor and an aero flip on top of the boot lid. Step inside and you will find front seats made from carbon fibre which are wrapped in Dark Knight (no, really) alcantara.

The Vantage AMR Pro is where get things get a bit more serious. So serious in fact that this model not street-legal. Powered by a 500bhp V8 engine inspired by the successful GT4 model, the Vantage also features a new, larger grille and a Stirling Green paintjob. It’s more aggressive than the Rapide though, thanks to a track-spec front splitter and huge wing which is the same as the one used on the WEC winner.

In fact, the VAMRP features the same bonnet and colour scheme as its successful motorsport cousin. The car sits on race-spec suspension and 19-inch alloy wheels, which will be wrapped in Michelin Pilot Cup 2 tyres. Like the Rapide, the inside features Dark Knight alcantara, only this time it’s joined by custom roll cage designed by Q by Aston Martin.

Aston Martin’s President and Chief Executive Officer, Dr. Andy Palmer, was quick to confirm that both the Rapide AMR and Vantage AMR Pro concepts are set for production: “As passionate enthusiasts of Aston Martin’s competition pedigree, AMR is something we have wanted to bring to fruition for some time. Cars such as the Vantage GT8 and Vantage GT12 confirmed that our customers love raw, race-bred models, but we also knew there was an opportunity to create cars that offer a sharper performance focus but stop short of those truly hardcore, special series models. With the AMR brand we have the perfect platform to deliver both.

As proof of that intent I’m incredibly excited to announce that we will be putting both the Vantage AMR Pro and Rapide AMR into production: the Vantage in an extremely limited series of no more than 7 cars; the Rapide as a run of only 210 cars. They are the start of something very exciting – a programme that will eventually see an AMR version of every model in the Aston Martin range”.