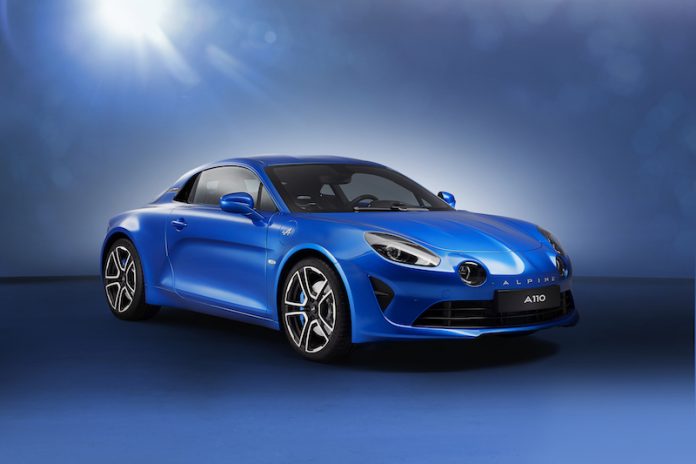 So far today I’ve the McLaren 720S and the new Aston Martin AMR models. Now though, we head over to the channel to our French neighbours. You would have seen pictures of the new A110 already but today the sportscar received it’s public unveiling and it still looks superb. As well as more pictures, new details have been released for the new model, which is rebooting the French brand. Park the new model next to model of yesteryear and the similarities will be clear to see. The original model looked (and still looks) fab and the new model has carried this on, but with a modern twist. The front end features a similar lighting signature as that of the 70s model, but of course the old yellow French bulbs have gone and have been replaced with bright LEDs instead, both front and rear.

Let’s move on from the lights though and on to the good stuff – the power. In the middle of this 1080 kilo French two-seater lies a 1.8 litre four-cylinder turbocharged engine, which produces 252bhp and 320Nm of torque. This may sound a bit limp, but as mentioned the car weighs just 1080kg, so it hasn’t got a lot of weight to lug about.

The power may seem a tad underwhelming – in fact it’s less than some hot hatches – but even so, the A110 will hit 62mph in 4.5 seconds and on to a limited top speed of 155mph. This power is mated to a 7-speed DCT automatic gearbox. The car may weight about a medium croissant but even so, Alpine has been careful with how it’s been distributed 44% at the front and 56% at the rear. The car’s light weight is thanks to an aluminium body which creates the least amount of drag in its class. This is thanks to a motorsport-inspire flat floor combined with a rear diffusor and air inlets in the front bumper to help push it in to the ground. This is why there is no need for a rear spoiler, which helps the car’s design stay true to the original.

Stopping power has not been neglected though – Brembo has been drafted to provide big brakes which are housed within 18-inch alloys, which are lightweight and produced by a certain Otto Fuchs – famous for the fabulous wheels seen on classic Porsches.

At Home On Track Or Road

Whether you choose to trash this around your local track or use it on a daily commute, Alpine is confident the new A110 will be at home in both environments. Featuring double wishbone suspension front and rear, the A110 should offer excellent handling without breaking your back every time you run over a bottle cap. Let’s hope the Sabelt seats are comfortable as each one only weighs 13.1kg, so don’t ruin it by carrying a heavy passenger. To mark the special occasion, Alpine will be producing 1,955 special Première Editions to mark the brand’s year of birth. These will be offered in either Alpine Blue, Noir Profound and Blanc Solitaire paint finishes, which will be teamed up with special 18-inch Fuchs alloy wheels. Also included in the price is a lightweight active exhaust, carbon fibre interior accents, brushed aluminium pedals and of course, a special plaque.

The new Alpine A110 will be arrive in the UK next year with prices yet to be confirmed.