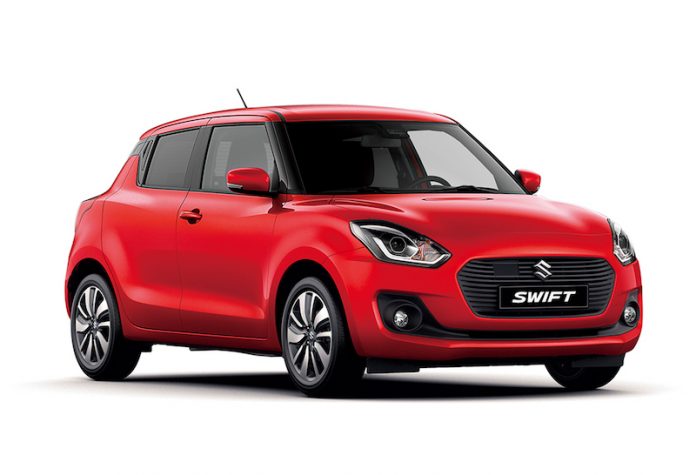 So far it’s been a feast of performance and beautiful designs, but now it’s time to bring it down to earth a little bit. I rather like the outgoing Suzuki Swift, particularly the Sport model. I’ve driven one a few times and although it doesn’t boast a great deal of power, it was a hoot to drive thanks to its low weight and capable handling.

One of the drawbacks with the Swift was its rather small boot, plus there wasn’t masses amount of room for rear passengers either. Thankfully though, the new Swift features a 20mm longer wheelbase, which doesn’t sound like much, but it does mean that the boot has increased by 25% to 254 litres. The car itself is 15mm lower to give a sportier feel, but the seats are 23mm lower as well, meaning better headroom inside. Getting access to the rear will be easier as the new model comes in 5-door guise only.

The Swift is built on the new platform that has been used for the new Baleno and the new Ignis. This has resulted in a weight loss of 30kg whilst offering a strong level of rigidity, making the car safer in the event of collision. Even the base model comes with six airbags for extra safety though for even more assurance.

Suzuki has been well-known for offering a fair bit for your money – I should know, I’ve tested most of them. The Swift is no different and the base model SZ3 is a good example of this. The trim is yet to be priced but this will give buyers six airbags as mentioned as well as leather steering wheel, DAB radio with Bluetooth, air con, front electric windows, rear privacy glass and LED daytime running lights.

The familiar 1.2 DualJet petrol engine, which produces 89bhp and comes standard in the base model, mated to a manual gearbox. There is now also the option of the 109bhp 1.0 Boosterjet engine which is used in the Baleno and the S-Cross. This three-cylinder unit can also be mated with Suzuki’s mild hybrid system to bring CO2 emissions down to as little 97g/km. Allgrip Auto all-wheel drive is also available with the new Swift, but the 1.2 engine will need to be selected for that.

And the Swift Sport? Well that is yet to be announced but it’s rumoured the new model will be turbocharged. I look forward to hearing more news on that.

The standard Swift will go one sale from June this year with prices to be announced nearer the time.