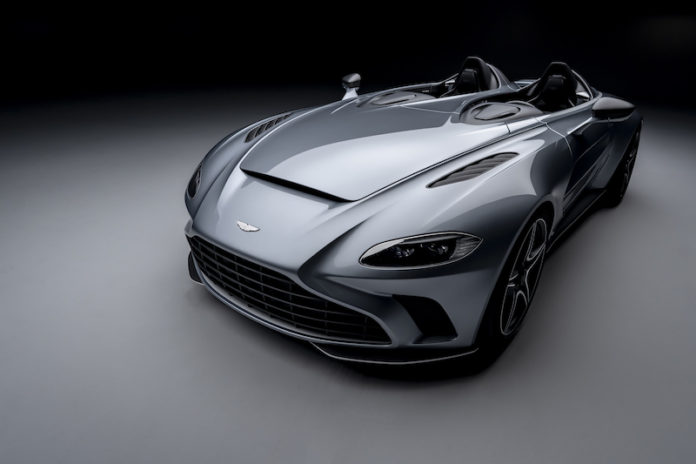 Ok, so perhaps my headline makes the car a bit more dramatic than it is – it features no weapons and you won’t be able to get radar lock on those motorists that annoy you most, but I’m sure you’ll agree, the way how it looks certainly makes up for it.

An Aston with a sting in its tale

Say hello to the new – and very exclusive – Aston Martin V12 Speedster, a droptop two-seater with more sex appeal than a Playboy photoshoot. Just 88 are to be made, and the one you see in this article is shown in a conceptual livery inspired by the F/A-18. For those of you that have no idea what that is, it’s fighter jet also known as the Super Hornet, which all sounds jolly exciting. This stunning piece of motoring architecture makes use of Aston’s latest bonded aluminium platform, using elements from both the DBS and Vantage model lines to help create its own unique chassis. At the front there’s independent double wishbone suspension, and the rear gets a multi-link setup with coil springs and adaptive dampers offering Sport, Sport+ and Track modes.

Miles Nurnberger, Director of Design, Aston Martin Lagonda, said: “With the V12 Speedster we do go back a step and look into our past for inspiration. Since the DB11 launch, everything has been focused and very forward looking. Here though, we find a different tempo. There’s clear lineage from the 1959 Le Mans winning DBR1 to our Centenary celebratory CC100 Speedster Concept in 2013.” “There is also a bit of 1953 DB3S in the mid-section, so it really is our latest incarnation of the Speedster concept. It’s also inspired by fighter jets as much as it is by our history, and it has been created to deliver an incredibly visceral experience, hence why it is a V12, rather than a V8. With the V12 Speedster we are amplifying all the emotional strings that we can to the absolute maximum.”

At each corner you’ll find 21″ forged centre lock alloy wheels, which have carbon ceramic brakes sitting behind them. It’ll stop alright then, but the interesting part is of course, the engine. As the name would suggest, it is powered by a 5.2 litre twin-turbo V12 offering 700hp along with 735Nm of torque, although Aston Martin has stated this an estimate.

The thunderous front-mounted, all alloy quad cam V12 feeds its power to the rear wheels via an 8-speed ZF automatic gearbox and a limited slip differential. The historic British marque predicts that the V12 Speedster will hit 62mph in only 3.5 seconds, and the top speed is likely to be around the 186mph.

Aston Martin Lagonda President and Group CEO, Dr Andy Palmer said: “It makes me enormously proud to reveal Aston Martin’s latest, most exciting special model today. The V12 Speedster is an incredible demonstration of the breadth of capability and determination from the ‘Q by Aston Martin’ team, who have worked tirelessly to create this stunning, two-seat sports car aimed at our most demanding and enthusiastic customers.”