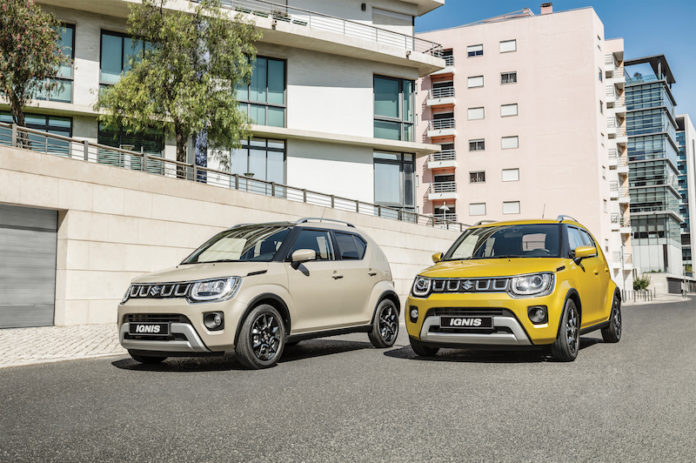 The very first moment I saw the Suzuki Ignis, I was captivated by its cheeky, happy-go-lucky nature. It was like looking at excitable puppy, it was all rather charming and quirky. It was a car I wanted to drive almost immediately, so I was very keen to see what the Japanese brand had achieved with the facelift.

I’ll be honest, I feel a little disappointed upon seeing the pictures for the new Ignis. My biggest problem is that front grille, which Suzuki describes as five spoke front grille, but it all looks a bit…Jeep Compass to me. That’s not an insult, but I feel the Ignis has lost a little bit of its identity – I prefer the old look in that respect.

Is that all, a new front grille that you don’t like?

No, of course not. There’s more to the new Ignis than a front grille that may or may not look like it came from Jeep’s leftovers. For starters, the exterior changes also stretch to a re-design of the front and rear bumpers, which now feature a silver finish making the car look as if it has a bashplate, highlighting the car’s pint sized SUV design. There’s three new licks of paint availble for the exterior, bringing the total of colours to thirteen. The new kids on the block include Caravan Ivory Pearl Metallic, Rush Yellow Metallic and, Tough Khaki Pearl Metallic.

The interior has also been given a spring clean, with new interior accent colours available including Lazuli Medium Blue Pearl and Medium Grey Metallic, as well new design to the instrument cluster.

Not only has Suzuki been tinkering with the looks, but it has also updated the 1.2 litre Dualjet petrol engine, which now boasts a new dual injection system and higher fuel economy thanks to a mild hybrid system that’s more beefed up than before. A CVT gearbox will also be an option for those that want the convenience of owning an automatic version of the city car-come-SUV, which Suzuki states offers powerful acceleration performance at low speeds whilst offering high fuel economy when cruising at high speeds.

The new Suzuki Ignis will go on sale next month, with prices yet to be revealed.