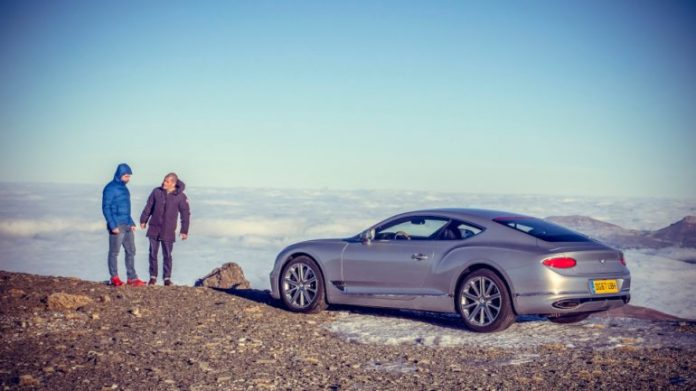 After being a little underwhelmed by last week’s offering of Top Gear, I was curious to see what this week’s had to offer. Well, on the face of it, there was plenty to get a petrolhead like me salivating. Why? Well, that’s because the episode featured the latest Bentley Continental GT, the latest edition of Renault’s hot Megane, and to finish it all off, the show concludes with a little known car called the Porsche 911 GT2 RS.

The show kicks off with a bit of a novel twist as both Matt LeBlanc and Chris Harris are sent to Spain to test the new Bentley Continental GT. Watching the two squabble about who should drive and critique each other’s reviewing style proved to be entertaining. There was good banter between the two, and I thought the segment worked really well. In fact, I’d rather like to see more of it.

The pair seemed pretty smitten with the car, with LeBlanc claiming it was the best Bentley ever. They then arrive at the Ascari race track, which allows Harris to bring out a rather special toy to try and rub LeBlanc’s face in it…

Reid’s on form in a French fancy

After a decent start to the show, we join Rory Reid as he takes us through the back catalogue of Renault’s hot hatches, which is always enough to pique my interest, despite never owned one. After the short but sweet history lesson, Reid introduces the latest offering from the RenaultSport division, the Megane RS.

Reid presents the film in his typical fashion, using a good blend of enthusiasm, casual humour and knowledge. He discusses how it’s a bit more toned down and how it’s also down on power compared to rivals, but then he balances things up by talking how the car feels and handles.

Having driven the Megane RS, I do agree with him on points, but I still think it’s not as special as I would have liked. Will it go down as a classic like the Clio V6, or the R.26R. Granted, those are different beasts entirely, but hopefully you get what I mean.

Finishing with a flourish

Just when I thought the episode couldn’t get any better, the show concludes with Chris Harris and a GT2 RS. That to me, sounds like a winning combination, like Fish and Chips, Ant and Dec (sorta) or a summer’s day and ice cream. It turns out, that it is a winning combination. The Top Gear test track may be wet, but that just means that Harris can slide about the car more, and once again, the interior shot of him sliding the car just kills it.

However, the GT2 RS is not all fun and games, as Harris points out. That’s because as he explains, it’s a pretty scary car when you have the driver aids off, and if it’s intimidating to a seasoned pro like Harris, just imagine what a mere mortal like would think. To hammer the point home, Harris wears a rather ‘interesting’ device to see how much fear he has driving the car compared to a more standard 911. Overall, cracking film – Harris at his best.

After the disappointment of last week’s show, it was good to see the Top Gear boys get back on the saddle and deliver a solid episode. It was good to see Reid included in the fold as well – he will be sorely missed when series 27 rolls around, and I may have to spend more time checking out his work on Carfection.