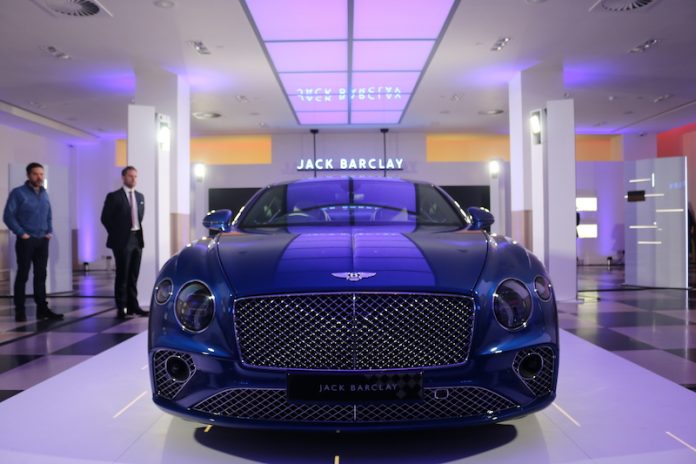 Yesterday I was kindly invited by Jack Barclay to see the third generation Bentley Continental GT receive its UK debut. Plenty of changes have been made to the new model, but don’t worry, it’s still quintessentially Bentley. Inspired by the EXP 10 Speed 6 Concept car, the new model features more technology, more power and less weight. It sounds like a rather intoxicating mix, don’t you agree?

The new Continental GT is lower and longer, but thanks to the use of different materials and different methods of manufacturing it’s over 80kg lighter than the previous model. The iconic 6.0 litre twin turbo W12 engine is still place of course, but it’s been enhanced, so it’s now pumping out 626bhp with 900Nm of torque. For the first time it’s mated to a dual-clutch 8-speed automatic gearbox, which makes the car a bit more efficient. That means it now offers 23.2mpg instead of the 19.9mpg offered in the previous car. Ok, so it’s not frugal is it, but that is not the point of this engine is it? Mind you, the engine is able to shut down half its cylinders when it’s cruising. Speaking of cruising, the car will hit its top speed in 6th gear, so 7th and 8th are designed for better cruising. However, it will still get your pulse racing as it’s able to race to 60mph in 3.6 seconds and the top speed is a rather brisk 207mph. The engine itself has been pushed further back to improve the driving dynamics of the car, so although it’s first and foremost a grand tourer, it should still please your keen driver. If you do happen to be a keen driver, you’ll bad glad to know there is a Sport mode to be had, but there is also Comfort and Bentley for those times you want something more docile. There is a new active all-wheel drive system which replaces the standard 40:60 power split, and will use a much power as possible to the rear, with the front wheels becoming active when more grip needed.

Not my words, but the words Bentley uses to describe the new Continental GT. There are plenty of areas that support this evidence such as the sumptuous leather seats that adjust in 20 different ways and can be specified with a new ‘diamond in diamond’ quilt. Here’s a fact for you, each diamond has 712 stitches to it, highlighting Bentley’s attention to detail. The seats also set a new benchmark for comfort according to the brand, and offer heating, cooling and massage functions.

As we’re on the topic of comfort, the Continental GT has continuous damping control to offer the best comfort possible, and the air ride suspension now has three-chamber air springs, meaning that in its softest setting there is 60% more air volume than the outgoing model. The result? A smoother, more comfortable ride of course. The noise in the cabin has been reduced by 9 decibels to make the car more refined thanks to the use of laminated acoustic glass. One thing the new Bentley Continental GT does well is to combine traditional luxury with cutting edge technology. For example, each car has 10 square metres of wood in it and you know how long it takes to create and fit the wood inlays? If you guessed nine hours then you are correct – here’s a virtual high five. Don’t think it’ll be like sitting in an old man’s club though as there will be plenty of tech to keep you occupied.

For example, there is a brand new rotating display, which looks like it’s been pinched from a spy film. Nothing appears to be amiss when you look at the well-finished wood fascia – dashboard doesn’t really do it justice – but hit a button marked ‘screen’ and there is a significant change. Before you know it, a 12.3″ touchscreen is rotating its way in to the cabin in such as fashion, you feel it should have its own fanfare. That may grow tiresome after a while though, but playing about the screen certainly won’t.

That isn’t the only tech on offer though – the instrument cluster is fully digital and is fully configurable, bringing the car in to the 21st century. The cabin is a truly place to be, and even the finer details such as the indicator stalks feel truly special in the hand. In fact, they could be put in to an art gallery and they would not look out of place to me. Having said that, the stalks have nothing on the design on the Matrix LED headlights, which have been inspired by the finest crystal glass artwork. The detail is deliciously intricate, and it looks like an item you would buy from a jewellers.

The Continental GT is available with a choice of 15 hides and carpets as well as 17 exterior colours, although buyers can have further options if they go down the Mulliner Bespoke route. 21″ alloys comes as standard, but there is an option to increase that 22″ if desired. At the rear you’ll find a perforated design to exhaust pipes which not only look good, but help to reduce heat for better efficiency.

A big thanks for Jack Barclay for inviting me to see the car in person, if you would like to contact them to enquire about the car, head to this link.