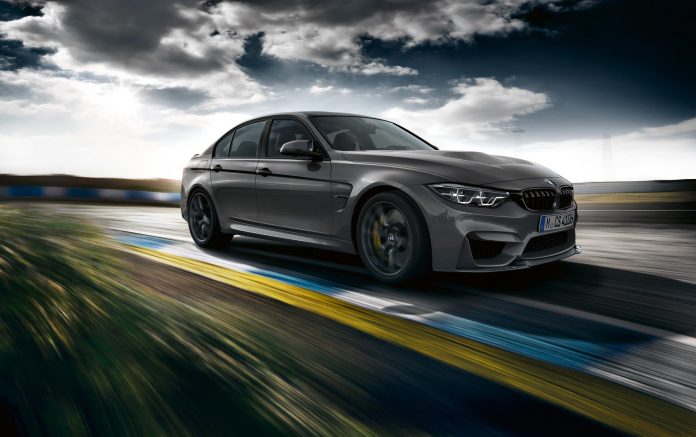 This week German brand BMW has announced it’s to add a new model to the M3 roster – the BMW M3 CS. Compared to the Competition Package, it’s lighter, more aggressive and has an extra 10hp. It’s available as of January next year with prices starting from £86,380. That’s a fair amount of wonga to part with, so it’d better be good.

The CS is fitted with a carbon fibre reinforced plastic bonnet, which is 25% lighter than the one fitted to the standard M3. The roof is also made from the same material, which has a weight saving of 6kg compared to the standard model. There is also a new carbon fibre spoiler, which not only saves weight, but significantly reduces lift on the rear axle. The diet means that the M3 CS has a lower centre of gravity and therefore, it’s more agile. The total weight now is 1,585kg (without a driver) – 50kg lighter than the standard model.

The car retains the same 3.0 litre straight-six unit, but it now offers 454bhp with 600Nm of torque – 10% more than the Competition Package. The 0-62 time has fallen to 3.9 seconds and the top speed is now a supercar-chasing 174mph. A 7-speed automatic is used to help transport the power to the tarmac, with power being fed to the rear wheels. The 7-speed gearbox even has its own oil cooler so it can meet the hard driving conditions the CS is likely to be driven in.

It’s clear just by looking at it, the BMW M3 CS is made to be as fast and dynamic as possible. It may be faster and lighter, but it also needs to have the chassis credentials to back it up. Adaptive M Suspension comes as standard, which offers three driving modes: Comfort, Sport and Sport+. The steering also has three different modes to best suit the driving conditions, or indeed the driver’s mood. The Active M Differential helps to deliver better traction and that is complimented by sticky Michelin Pilot Sport Cup 2 tyres, which are wrapped around 19″ alloys (265/35) at the front and 20″ (285/30) at the rear. The alloys themselves are lightweight, which helps to keep the unsprung mass low. The front features a two-link strut behind a five-link wishbone, with forged aluminium hubs and calipers, with double-wishbone suspension fitted at the rear. BMW M compound brakes come as standard, with four piston calipers at the front and two piston calipers at the rear, but carbon ceramic brakes can be selected as an option for those wanting even more stopping power.

Anyone buying a BMW M3 CS will want to stand out from the crowd. Let’s face it, you don’t want to spend all that money, only to find that it gets mistaken for a standard model. Thankfully, the Bavaria’s finest has thought of that. At the front there is a carbon fibre splitter as well as large air intakes to help cool the meaty 3.0 litre engine. The CS also comes standard with BMW’s Individual High Gloss Shadow Line Trim, plus the rear lights have been darkened. Six exterior colours are available, with  Alpine White coming as standard. Inside the cabin, you’ll find an exclusive bi-colour Silverstone/Black leather and Alcantara interior, with the same lightweight sport seats as used in the M3 Competition Package. The CS also has the same style seatbelts as the CP, meaning you get the iconic M Power striping on them, a feature I really like. There is also an exclusive red start/stop button, which BMW states will add a sense of occasion. Step in to the rear and you’ll find seats that also feature an exclusive, two-tone Merino leather in the same colour combination. You may have the leather but I’m afraid the climate control has been ditched in an effort to bring the weight down. There are other creature comforts to be had though, such as the Harmon Kardon sound system and the BMW Navigation System Professional, which are offered as standard.