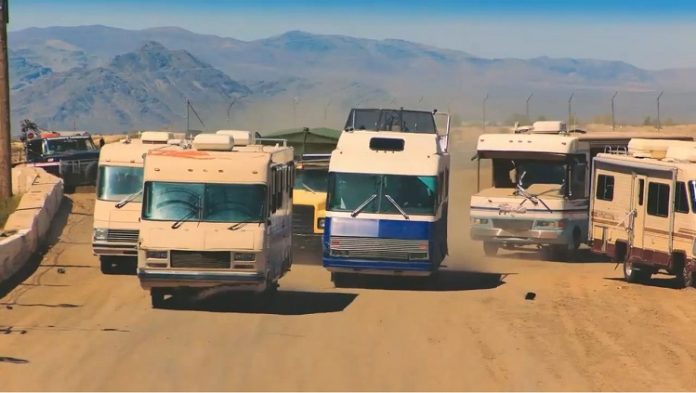 We’ve already had the hit-and-miss Colombian special in season 3, but Clarkson, Hammond and May, weren’t satisfied with that, as this week we’ve been treated to another special.

The’s pretty much the question Clarkson asks in the show’s opener, and to be fair, he seems to have a point. However, the Yanks love an RV holiday, so the GT boys head over the atlantic to see what the fuss is all about. We cut to them sharing an old RV ‘kindly’ provided by Mr Wilman, the show’s producer.

May’s at the wheel whilst Clarkson and Hammond are playing cards, and it’s clear they’re not having much fun. Clarkson moans about the toilet facilities in a comical manner, before making a typical ‘American’ coffee in a very tongue-in-cheek way, which I rather enjoyed. Quickly the trio decide that it’d be better for all involved if they all go off and get their own bespoke RVs.

A pub, a flying bridge, and…tent on a truck

We join to the trio, two days later in the desert where we are presented with May’s take on the ultimate RV, which is essentially a traditional English pub, with the appropriate name of The Rack and Pinion. He invites his esteemed colleagues in for a guided tour before offering them a choice of drink between ‘Lady Petrol’, ‘Brummie’s Ruin’ or ‘Warm Brown Beer’. After talking a bit of ‘pub bollox’ as Hammond calls it, the trio vacate the Rack and Pinion and head in to Clarkson’s version of the ultimate RV. Needless to say, it’s a very different take on May’s home-from-home approach. This is because he has fitted his RV with…a toilet. Not just any toilet, a proper one, with a cistern. There’s also a bed that even Warwick Davis wouldn’t have room to stretch out, but Clarkson saves the best ’til last. He takes Hammond and May up to the roof. Up there he’s only gone and converted in to a flying bridge, like you get on a luxury yacht. This, as Clarkson points out, is fully operational, allowing him to drive the RV from the roof. I’m not sure whether that’s insane, or inspired…

That of course leaves the Hamster who has decided to go for a much more minimlist approach. For starters, it’s not even a proper RV, it’s an old truck with looks to be a scaled down version of the Grand Tour tent attached. Inside there’s a bed that even the army would deem too low budget, a telescope, a rocking chair, and on the back, a dirtbike. No expense spared…

Time to hit the road

After the brief introductions to their machines, the trio hit the road, to see what their RVs are like on the open road. Clarkson’s seems to have a dash that makes as much sense as a Brexit negotiation (with about the same amount of working functions), May’s seems to need blue language in order to change gear and Hammond’s, well that has the same top speed as an elderly snail.

CHM head to an RV park to try and get a greater sense of what the appeal is, and even just arriving causes issues, as Clarkson’s struggles to stop, and then he burns the director’s hand trying to turn the ignition off. May then bores the locals with his scintillating pub knowledge, and Hammond makes a new friend. Speaking of friend, Clarkson keeps seeing an odd figure who looks strangely familiar… It’s also worth noting at this point that even though the episode is in its early stages, there are plenty of gags that landed well with me, and it was pretty a laugh a minute. After Hammond wakes up find his clothes are gone, he and Clarkson force May to join them in a bit of light dune racing. You would expect that Captain Slow hate it, finding the whole thing a bit ‘philistine’, but no, he bloody loved it. After that adrenaline blast, the trio hit the road once more, before heading further in to the desert, which alloys Clarkson to drive his RV from his flying bridge, which goes…well.

From there on in, the entertainment just keeps coming and coming, and what I love is that a lot felt pretty organic and it didn’t feel overly scripted like the Colombia special. Mind you, the bit where Clarkson collided with May’s RV did seem a bit staged, but in all honesty, I was laughing too much to car.

Between then and they boys’ next stop, there is plenty of action and laughs along the way – too much to go through here. Their next stop is the Spring Mountain Complex, which may sound like some sort of nature reserve, but the only thing to observe here is all American muscle. That’s because the three play about in a Jeep Cherokee Trackhawk, a Cadillac CTS and a Chevrolet Corvette ZR1. Hammond, who was piloting the Jeep, decided it would be a great idea to do a drift competition, which he and Clarkson end up struggling with. Surprisingly, May comes out on top here…sort of. After some more GT antics and some haphazard exploring, the trio decide that the only thing left to do is to enter what’s left of their RVs in to a demolition derby – last one standing wins.

Overall, I thought this was a cracking episode from start to finish, and it’s definitely one I would go back to and re-watch. I’ll be honest, I was a bit apprehensive in what to expect, but the episode was a complete home run. I’m finding it very difficult to pick faults with the episode, even after having quote some time to compile my thoughts (I watched it on Saturday).