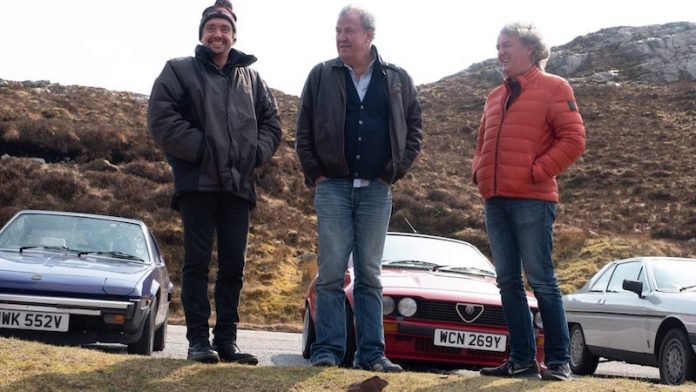 We are now in the mid-way point of what has been a bit of a hit and miss season of The Grand Tour, but what does this week’s instalment offer? Well, we see TGT lads head to Scotland to drive some cars they feel will be a good investment, discuss sick in Conversation Street, and Jermy (the misspelling will make sense later) test the latest BMW M5. This looks to be a good episode…

Would you bank on these cars?

After being revealed by the green canvas flap in typical GT fashion, the trio kick the show off by talking about classic cars that have shot up in value in recent years. Cars such as the timeless Jaguar E-Type and the iconic Aston Martin DB5 get banded about, but Clarkson, Hammond and May set themselves the challenge of trying to buy cars that will be a future investment.

And with that, the episode shoots up north to Inverness, Scotland. Clarkson is the first to arrive, and it actually looks as if he has got a shrewd choice on his hands, despite it being an old Alfa Romeo. More specifically, it’s an Alfa Romeo GTV6 – car that looks as good as it sounds. It also looks pretty mint, and there’s good reason for that – it’s only had one owner from new and it’s done less than 30,000 miles. May then turns up in a car which I find to be a questionable choice. That’s because it’s a Lancia Gamma Coupe, a car which May seems to think is beautiful and stylish. Don’t get me wrong, Lancia made some truly wonderful looking cars over the years, but I don’t think this is one of them. That of course, leaves Hammond, who’s choice of car is interesting – and considerably cheaper than the Alfa and the Lancia.

Hammond may call it a “Baby Ferrari” but what it actually is, is a FIAT X19, a car you have probably never heard of. The Hamster tries to justify his purchase whilst Clarkson questions the quality and its colour history. After that dispute has unfolded, the trio decide that the route they shall take they’re appreciating classics will be the NC500, a route, which as the name suggests, is 500 miles long.

Because Mr Wilman (the man in charge) thinks the Italian hat-trick of cars won’t make the journey, he organises some ‘interesting’ back-up methods of transport. Clarkson actually has to make use of this transport later on in the episode, much to his woe. I would have said this is a spoiler alert, but let’s face it, he’s driving an old Alfa – you’d almost expect this outcome.

Before that though, the trio take to the road and May as he often does on these kind of cheap car challenges, has his moment of private confessions where he points out flaws with the car, one of which becomes very apparent not too long after they have set off. As you can imagine, this creates good banter, which is why I love it when Clarkson, Hammond and May do cheap car challenges.

Speaking of challenges, the trio find a local karting track and see who can do the best drift. This turns out to be a challenge too far as he discovers his car is front wheel drive, causing him to have to use some interesting equipment. Despite the rear wheel drive nature of their cars, Clarkson and Hammond also have to use some interesting equipment to help their cars kick their tails out. This doesn’t quite end well for Clarkson…

After an interesting and entertaining Conversation Street, we join Jermy Clarkson at the Eboladrome with one the most important new cars there has been in recent times – the BMW M5. This is a car that set the standard for fast saloons, but the new one has turbochargers, an automatic gearbox and all wheel drive, causing Jezza to question whether it’s still capable of being a “swivel-eye lunatic”. As it happens, it can.

The review is shot beautifully and I really enjoyed the effects and shots used in this clip as it really gave a slick production. Clarkson delivers the piece marvellously, but what else would you expect? After humiliating an AMG GT, Clarkson describes the M5 as doing its job – being “Ferrari Fast”. Not content with that, he turns the car in to its rear wheel drive mode and slides about in a fashion that would almost make Chris Harris jealous. Almost. But what if you don’t want all this track-focused performance and you want a fast saloon that’s more about luxury and comfort? Well, there is another way – the Alpina B5 Biturbo. I have to say, I’m impressed and quite delighted the Alpina has got exposure on a show like this as it’s not a well known brand despite being around for a number of decades

Yes, it can still get it’s arse when provoked, and it actually has more power than the M5, but as Clarkson explains the suspension is more designed for potholes, than apexes. The dampers also have a Comfort Plus to make the car easier to live with, prompting Clarkson to state that it’s the car he would pick out of the two. Overall, it was a fantastic double review – great stuff!

It’s time to go back to Scotland, where the scenery is breathtaking. So breathtaking, the production team must have needed very little effort in the editing suite to make it look this good. After May shows us his haunted air conditioning, the trio stop for hot drink to amend the route. After stating the the NC500 is going to be a bit long, they come up with a route they call ‘Piloting Extremely Nicely In Scotland 287’. Just take a few moments to work that one out. CHM set out on the erm, PENIS 287 taking in the wonderful scenery, although Clarkson has a problem. His colleagues have forgotten his birthday, and well, he’s a bit upset. To help cheer him up, he decides to get the propshaft bearing repaired on his GTV6, which leaves Hammond and May to surprise the orangutan with a party with some interesting food choices.

Unfortunately, Clarkson isn’t too happy with his party but that soon washes away then they disembark on the final leg of their epic, Scottish journey. On the last leg, they sum up their cars, with Clarkson (unsurprisingly) declaring that his GTV6 is going home with him. They then arrive back where they started in Inverness, and then it’s back to the tent. Will these car’s appreciate? Well, the conclusion may have you doubting…

I really enjoyed this episode, but to be honest, I had a strong feeling I would given the ingredients. Well, not the ingredients for the food for Clarkson’s birthday. The scenery and cinematography was on point, the choice of cars was interesting and predictable (well perhaps Jezza was a bit predictable), and the M5/Alpina film was fantastic as well. Overall, a cracking episode.