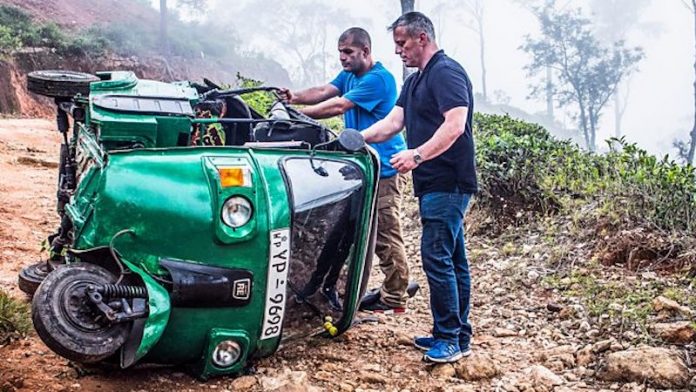 Are you a fan of Tuk Tuks? Have you lamented the fact that they get so little coverage on car shows? Fear not, as tonight’s episode of Top Gear more than made up for it. For those on you that like proper cars, you’ll be pleased to know that the new BMW M5 and Mercedes E63S AMG also feature on tonight’s show.

You can move anywhere in the UK without hearing about Brexit, or being reminded about it in some way. British business here is at sake, but Harris thinks he has come up with a better solution than the new HS2 high speed train. What is that, I hear you ask? Well, that is to buy everyone in Manchester the latest BMW M5. Taking said car to the Top Gear test track, Harris demonstrates the car’s speed, stating that it’s faster than the train.

He does have a bit of a reservation – much like the majority of petrolheads – and that is the fact that the new M5 is front wheel drive. However, he then goes on to explain that the car can be changed to rear wheel drive only, with a button he describes as the “11pm at the Christmas Party button”, which had me in creases. From there on in, you know what to expect – lots of sideways action. I tell you what I love about the production from this review, the interior shot where you looking over Harris’ left shoulder, watching his fine car control in action. It’s a simple shot, but a very effective one.

Not content with this amount of sliding, Harris decides to bring another car to the party – the Mercedes E63S AMG. The reason being of course, is to compare it to the M5, and to do so, he needs the help of The Stig. The idea is simple, a one lap race around the TG track – the winner is the first to park in the executive parking space. At the end of the film, though, he declares both cars as irrelevant, and to be fair, he makes a decent case for this.

Overall, it was another fantastic review from Harris, but I felt as if the Grand Tour production was slicker. However, whose delivery did I enjoy better – Clarkson or Harris? Oh, difficult to say, as they took different approaches. However, I think Harris just about gets my vote – but both were cracking films. The vehicle that can do it all?

From the Top Gear test track, Harris goes all the way to Sri Lanka, to show Matt LeBlanc the merits of the humble Tuk Tuk. Its very clear that the American needs some convincing, as he describes the vehicle as welding together the worst bits of a motorcycle, and the worst bits of a car. Despite this complaints, he and Harris take to the city roads, which looks to be more dangerous than I’d care to think.

LeBlanc has a similar mindset, and clearly needs more convincing, so Harris takes to play Tuk Tuk polo. After LeBlanc chooses a diplomatic way of deciding who drives, the pair set to work and frankly, well, they’re awful. Despite this, Harris thinks things are going well and that the Tuk Tuk is not only the perfect city car, but also the perfect sports car. Harris is not done there, though, as he and LeBlanc take part in a race to see how can shift 25kg of tea the fastest, proving that the Tuk Tuk is also capable of lugging big loads. This, like good chunks of the piece, provided good banter between the two, and God only knows how they didn’t roll the damn thing over!

Next up, the pair climb the Devil’s Staircase, to prove that they can also make great off-roaders. Yeah, I really think Harris may have loosened a screw in his brain after all the drifting he has one in his life. After getting a flat tyre, he uses LeBlanc as a human jack, which goes…well. After this calamity, the producers step with an almighty challenge 0 to drive from there…to India. This means they need to cross Adam’s Bridge, which turns out not to be a bridge as all.

A tuk in the ocean

After making their way to Adam’s Bridge, the pair realise that it’s no longer a bridge, instead it’s a series of small islands between Sri Lanka and India. Clearly, the Tuk Tuks would not be able to get there with some modifications, especially as Harris’ one is a bit mangled. Le Blanc goes for oil drums for buoyancy, whereas Harris goes for hot dogs. No really, he did. They will make more sense if you’ve watched it. Despite his mad but inventive design for flotation devices, Harris’ Tuk Tuk sinks to the bottom of the ocean, leaving him to hitch a ride from the Tuk Tuk skeptic. Well, I say hitch a ride, he ends up driving whilst LeBlanc watches the seas in search for the 9th island, which means they’ve reached India. Do they make it? I’ll leave that as surprise.

Overall, it was a good episode, but I’ll be honest, the Tuk Tuk film didn’t really hold my interest that much, even though there were some funny moments in there. The M5 v E63S piece was fantastic, though, but I would have wanted a bit more car content, not Tuk Tuk content. Also, Rory Reid was barely used in the episode, but I supposed he played a large part in last week’s episode in the Ignis film.