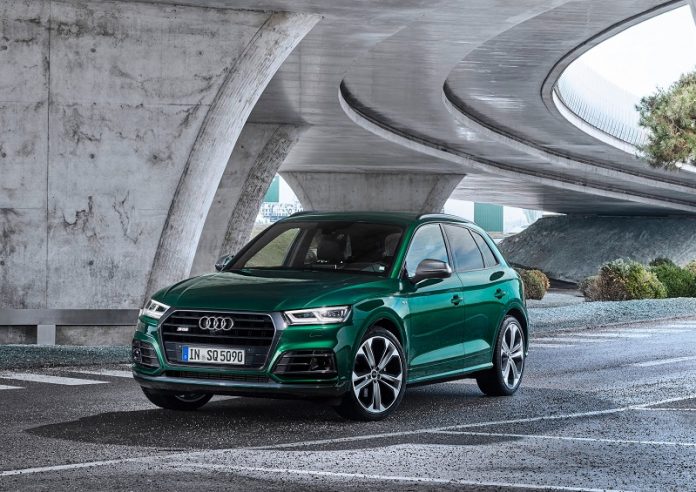 Audi has revealed the third generation SQ5, the latest performance SUV from the German brand. The 3.0 litre V6 TDI diesel is still firmly in place, but it’s no longer aided by two turbochargers. This engine is mated to Audi’s famous quattro four wheel drive system via an 8-speed tiptronic gearbox.

A force to be reckoned with

The 3.0 litre V6 TDI engine may only have one turbocharger, but the new model has electrically powered compressor, which Audi states offers a split-second response. How much power does it offer, though? 347hp is on tap, with a Goliath 700Nm of torque, which is available from as low down as 2,500rpm. As you can imagine with that tyre-shredding amount of power, it won’t take long to hit 62mph. In fact, this performance SUV will hit said speed in a time of just 5.1 seconds and as you would expect from a German performance car, the top speed is limited to 155mph. As well as offering better performance, the mild hybrid system is able to offer better fuel economy, although this isn’t exactly the car to buy if you want to save money on fuel. However, if you want to know how frugal it’ll be Audi states that it’ll achieve up to 34.4mpg on a combined run, with emissions coming at a lowest of 172g/km of CO2 emissions.

To help improve economy, the clever mild hybrid system in the new SQ5 is able to recuperate energy when the car is cruising and it can even turn the engine off for up to 40 seconds when coasting to make the car more efficient.

Control to go with the power

As is often said, power is nothing if you cannot control it. To help manage the thunderous torque going to wheels, the new SQ5 has been fitted with quattro all wheel drive as well as five link suspension with damper control. If you go for the Vorsprung model, you also get a sport differential for the rear axle for better traction. The adaptive suspension fitted to the SQ5 is a juicy 30mm lower than a standard Q5, but buyers can opt for air suspension at an extra cost. There’s also a good host of driver assistance systems to make living the SQ5 easier, and of course, to make it safer. Mind you, it’s worth noting that the majority of the safety kit is to be found on the Vorsrpung model. Active lane assist and Audi pre sense (autonomous emergency braking) come as standard for both models, whereas the Vorsprung trim level adds Audi pre sense front and rear as well as park assist.

Prices for the new Audi SQ5 are yet to be announced, but it will be available to order in the next few weeks.