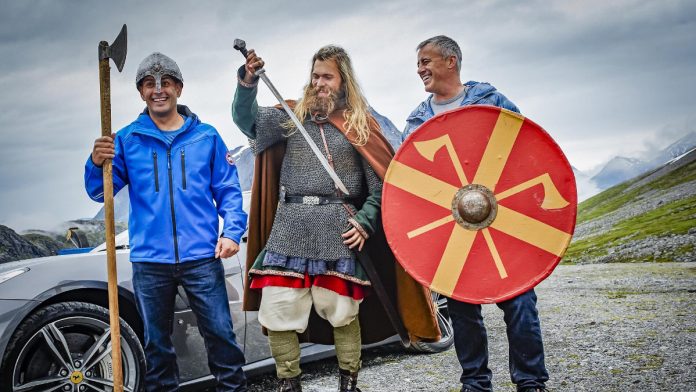 After a very, very, very long wait, Top Gear is finally back on our screens. They say that good things are worth the wait, but was this? Well, to begin with, it all feels rather bittersweet. That’s because this will be the last series where you’ll see the ‘current’ line up of Matt LeBlanc, Chris Harris and Rory Reid.

The opening montage looked spectacular, but I must admit I sighed inwardly as I knew that this a taster of a dish that will eventually run out. For those of you expecting to see the new line up of Chris Harris, Paddy McGuinness and Freddie Flintoff, you’ll have to wait for series 27, as this series was set well in advance. In fact, I was in the studio for this recording and that was almost a year ago!

After the slick looking montage, we join Harris and LeBlanc stood next to a Skoda Superb of all cars. They set out to ask whether you can get a better family estate car than the Superb. We are then transported to Viking country – Norway of course. Harris’ weapon of choice is the Porsche Panamera Sport Turismo thingymabob (I never remember the full name, it’s too long), which isn’t really the cheap family estate you probably had in mind, but next to LeBlanc’s choice, the Ferrari GTC4 Lusso, it looks like a bargain. After greeting his colleague, Harris states that LeBlanc has cheated, prompting the American to rebuff him with a witty remark claiming that he had “cheated better”. They then boast about who’s got the better car, and the two bounce off each other really well. It’s a shame that LeBlanc has decided to walk away – I’ll miss his casual humour. After their bickering, the pair get stopped by a Viking, whom has a message from the producers, stating that LeBlanc and Harris should seek out the best driving road in Norway – the Trolsteigen.

On the way, the duo see which car can get the fastest top speed after playing about on a Norwegian runway – there’s a fantastic interior shot of Harris drifting – and they then see who’s got the most practical car by racing to a destination whilst carrying a tree. Harris makes a bit of a schoolboy error here, giving LeBlanc the edge. After that wood-based bout of adrenaline, it’s back to the studio.

Now it’s on to Rory, whom states that you don’t need to speed £100,000 on two cars to be able to get a good mix of practicality and performance. No, instead, what Rory thinks we all need is a Suzuki Ignis – is he feeling ok? Reid takes on the concrete jungle in said car, demonstrating why it’s perfect for the task in hand, before taking it off road to further prove how capable it is.

Rory delivers the piece well, mixing information with a good amount of humour that suggests the film isn’t taking itself too seriously – I like that. I still can’t believe he is being forced back in to the dark depths of Extra Gear, but never mind… After splashing out on a new watch, a towel man and blowing his large wad of cash around the cabin of the plucky Ignis, he gets presented with a challenge, and it’s a rather big one for such a small car. His challenge is to get all the way up Girlet Hill in the bid to make a little taller so it can become a mountain. No problem, thinks Reid, but he soon gets a nasty German surprise in the shape of Sabine Schmitz who has gatecrashed the party with a very yellow FIAT Panda Cross. Naturally, the challenge now becomes a race between the two of them.

This film is a great example that you don’t need expensive cars and fancy special effects to make an entertaining piece of content. I had great fun watching Reid and Schmitz use and abuse their pint-sized SUVs, and my word, did they take a battering! As they move their way the hill, the pair need to collect rocks they can use to make the hill taller, and after almost writing the car on a small boulder, Schmitz gets what she needs, but not for long… I won’t tell you how it ends, but I will tell you it was most definitely an enjoyable watch.

We head back to Norway to conclude the show after James Marsden went out in the reasonably fast car. We rejoin LeBlanc and Harris in their ‘family’ estates for one more do or die challenge. The duo need to see who can get up a mountain pass the fastest whilst carrying some unusual passengers. Spoiler alert, Harris wins it, but he – and LeBlanc – end up getting more than they bargained for.

This was a strong series opener, but I can’t help but have feelings of a bittersweet nature, as I know that the Top Gear as we know it is due to come to an end. It feels like the trio (LeBlanc, Harris and Reid) have just started to give the show its own identity again, but after this series, the production crew will need to pretty much start from scratch, thanks to the introduction of Freddie Flintoff and Paddy McGuinness.

Mind you, that is then, this is now. Episode 1 then, was a strong start to series 26, and it’s definitely left me wanting more. Bring on next week!