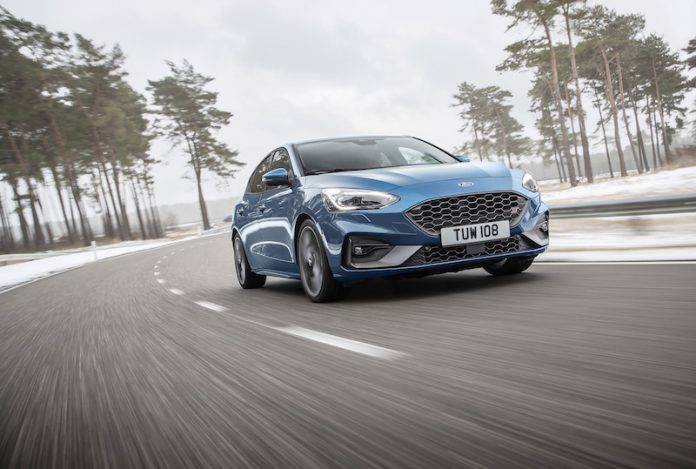 The new Ford Focus ST is here, and it’s a car that’s had a high amount of anticipation, like any fast ford should have. However, on first impressions, I must admit it looks a tad…safe. Now I know looks are and will always be subjective, but at first glance, I’m a little underwhelmed. Maybe it looks better in the metal. Anyway, let’s move away from the subjectivity and delve in to the juicy facts.

What engine has it got, what’s the power?

This is of course a hot hatchback, therefore the engine and the performance states take centre stage, so it seems like the obvious place to kick things off. Like its predecessor, the new ST will be offered with a choice of a turbocharged petrol or a turbocharged diesel. The majority will of course go for the petrol, but unlike the last car, it’s displacement is not 2.0 litres. For those of bracing yourself for me to say that Ford has downsized the engine, fear not. That’s because Ford has actually made the engine larger, which nowadays is a bit of a rare thing. More specifically, it’s a 2.3 litre EcoBoost unit similar to that found in the EcoBoost Mustang and the outgoing RS. It’s not as powerful as the RS (understandably) but it’s still good for 280hp and 420Nm of torque, making it one of the most powerful cars in its class.

Ford states that the petrol unit will be the most  “free-revving Focus ST engine ever”, and although the performance stats are yet to be confirm, the Blue Oval predict this engine will crack 62mph in under six seconds. A 6-speed manual or a 7-speed auto can be selected, with rev matching available for the manual, and driving modes available which ever engine/gearbox you go for. There’s also a clever anti-lag system for the petrol, which has previously been developed for the GT and the F-150 Raptor, so Ford isn’t mucking about here. As mentioned earlier, the new ST now has driving modes; Slippery/Wet, Normal and Sport, but if you go for the optional Performance Pack you’ll also get Track Drive modes which will make the car more responsive when used on track. The chunky flat bottomed steering wheel also features a ‘Sport’ button so you can waste no time getting ready for a B-road blast, but there’s also a mode button to access the other, well, modes.

Right, well about the diesel?

Oh, yes, the diesel – how could I forget? The diesel power is provided by Ford’s new EcoBlue diesel which has a displacement of 2.0 litres, and offers 190hp with 400Nm of torque. This engine is the most powerful diesel engine fitted to a Ford Focus, with peak torque coming in between 2,000 and 3,000rpm, and 360Nm is available from as little as 1,500rpm to give you that low end shove. That said, the engine is one of the most important parts of your car that you should know about especially if you have a used Ford car. It’s not all about the power

Power is all but useless if you can’t apply it in the correct manner, but of course, the boffins at Ford have addressed this area. They’ve done so by fitting an electronic limited diff (a first for a front wheel drive Ford) to give better traction in the corners. How does it work? Well, here’s how Ford describes the system:

“The system uses hydraulically activated clutches to limit the engine torque delivered to a wheel that has reduced traction on the road surface, and redistributes up to 100 per cent of available torque to the wheel with more traction to counteract wheelspin that can hamper acceleration through, and out of, corners.” Ford states that the system offers greater precision than your standard mechanical LSD. This is because the system, which has been developed by Borg Warner, can pre-emptively adjust torque distribution using inputs from powertrain and vehicle dynamics sensors, rather than responding to wheelspin as it occurs, and can gradually apply differential locking for fine-tuning performance.

The Borg Warner-developed technology is faster to deploy and offers greater precision than a traditional mechanical LSD. The system can pre-emptively adjust torque distribution using inputs from powertrain and vehicle dynamics sensors, rather than responding to wheelspin as it occurs, and can gradually apply differential locking for fine-tuning performance. The petrol models also make use of Ford’s Continuously Controlled Damping if you go for the Performance Pack; this system is able to monitor the suspension, body, steering and braking inputs every two milliseconds to adjust damping responses. The diesel models on the other hand, make use of Ford’s Torque Vectoring system to reduce understeer in the corners by braking the inside wheel.

The Fiesta ST once held the crown for being Ford’s fastest response when it came to steering, but the Focus ST has now gained that crown as it’s 15% faster than the standard Focus. The brakes have been beefed up as well; in fact Ford used the same testing procedures as that used for the GT, and as a result, the new ST has almost four times the fade resistance of its predecessor. The agile and energetic character of the standard Focus is retained using the original spring specifications, with damping stiffness increased up to 20 per cent at the front and 13 per cent at the rear, while ride height is reduced by 10mm, to improve road-holding and response in performance driving scenarios.

Will it still be usable everyday?

In a word, yes. Well, it should be anyway. The ST may be on stiffer suspension, on a ride height that’s 10mm lower, but it still has creature comforts such as chunky Recaro seats, adaptive cruise control, adaptive front lighting, active park assist 2 (automatic only), head up display, as well as a good mix of technology and safety. If you go for the estate version, you’ll also get a lot of luggage space of up to 1,653 litres.

How much is it? When can I buy it? Tell me now!

Ford is yet to confirm the price of the new ST, but Ford has confirmed that like the last car, it will be available in five-door form or estate, and that it will go on sale in Europe as of summer.

What do you think of the looks? Let me know in the comments section below.

About
Car Obsession is a site filled with more cars than you can shake a stick at, and the home of the latest car news, reviews, opinions and more!
Contact me: [email protected]arobsession.co.uk
Follow Car Obsession
© Car Obsession 2021