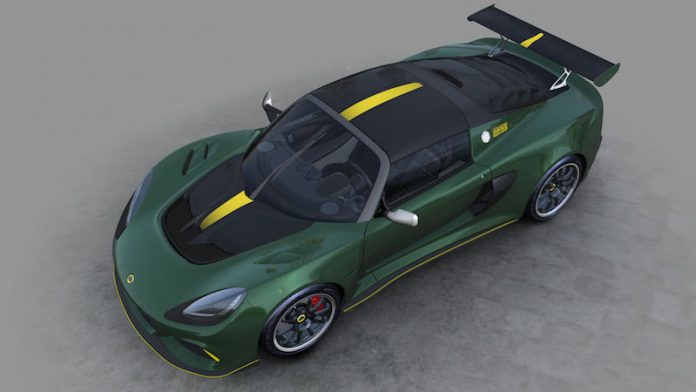 Ok, as names go, it’s not the most snappy or catchy one going. However, that won’t matter for those that will be lucky enough to get their paws on this super limited edition Lotus. You see, only 25 will be made – hence the Type 25 – meaning that it will be more sought after than an umbrella in the UK spring time – have you seen the weather lately?!

As Fast As It Is Limited

Like the standard Lotus Exige Cup 430, the Type 25 is fitted with a 3.5 litre turbocharged V6 engine which produces no less than 430hp, with 440Nm of torque. Couple this with a low kerb weight of 1,065kg (dry weight) and you’ll find yourself with a car that will launch itself to 60mph in just 3.2 seconds and will continue to a top speed of 180mph. It’s not all about straight line speed though, after all, this is a Lotus. This means it will be just as fast in the corners as this model is able to produce 220kg of downforce. The car also has components made from materials such as titanium and carbon fibre, which are all good signs. At each corner you will find lightweight aluminium alloys, which are shod in Michelin Pilot Sport Cup 2 tyres. There’s adjustable dampers, which are supplied by Nitron and Eibach is on hand to provide adjustable front and rear anti-roll bars, which will be dead handy for track days – or for showing off in the pub.

Good question. Now earlier I stated this because just 25 were being made, but that is not strictly true. F1 fans among you will know that this model is a nod to the famous Type 25 Lotus Formula One racer that one the driver’s championship and constructor’s championship in both 1963 and 1965. It was also the first F1 racer with a fully stressed monocoque chassis. Each model will wear a Type 25 classification to honour the former racer and that’s not the only nod to the 60s racer. The green and yellow livery will be a big clue, and if you step inside the cabin you’ll find that the gear lever for the 6-speed manual gearbox has a wooden gearknob for even more retro-ness. The inside also features carbon race seats trimmed with alcantara, and don’t think you’ll have to forgo all creature comforts. Air conditioning is standard as is cruise control, plus it even has Bluetooth! It’s practically the perfect daily. Too far?

Ok, calling it a daily car may be too far a stretch, but it’s certain it will be an expensive car. This is because – I hope you’re sat down – it’s costs a whopping £110,000. That’s a lot of money, but let’s face it, there’s a good chance all 25 will be bought by very wealthy collectors that are not likely to ever drive the car in anger. Pity.