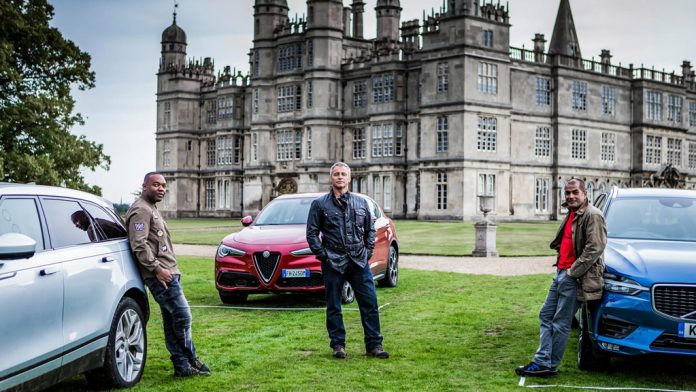 Well, here we are, episode 6, the end of the series. It’s been a short yet thrilling ride but the Top Gear boys went out with a bang tonight. Actually, in fact there was quite a few bangs, some of which could have been fatal. In this week’s episode, the boys pit three SUVs against each other, Harris tackles the rather flammable Alpine A110 and Jason Manford features in the Reasonably Fast Car.

We start the series 25 finale with Matt LeBlanc settling in to an SUV made by a brand that seemed to be completely agains the idea of making an SUV. Yet, like most politicians, they performed a U-turn and the end result is the new Alfa Romeo Stelvio – a car I’m desperately trying to get myself. The model LeBlanc has at his disposal is fitted with the 2.0 litre petrol, which throws out a respectable 280hp – not bad. LeBlanc seems to be enjoying himself in this Italian stallion, but soon Chris Harris pops up, stating that SUVs are pointless.

However, as he is having to fly the SUV flag, he has chosen the Volvo XC60, which he deems to be a benchmark in this field. He tries to show his American colleague the charms of the Swede, but before they can get in to the full swing of things, Rory Reid makes a rather noisy arrival in a Range Rover Velar. Shortly after this the trio are handed a challenge. Oh yes, things about to get interesting – and bumpy. In the first of two challenges, the trio need to take part in a Gymkhana – the horse kind, not the Ken Block kind. However, as well as having to behave a horse, each car needs to be towing a horsebox in the process. This becomes quite a problem for city-boy Reid, as it’s soon clear he has little idea how to attach a tow bar.

Apologies for the massive spoiler alert, but if you haven’t heard about this then you must be living under a rock. If you have been living under a rock, just wait ’til you hear about Ant McPartlin. Anyway, that’s enough topical banter – back to the test. The new A110 has won the plaudits of many, even though it’s not really the fastest in its class, nor is it the best handling. I’ve not driven one by the way, so I can only comment on what I’ve heard.

However, as Chris Harris points out, it’s light. Over 300kg lighter than an Audi TT RS in fact as Harris points out with the use of a piano. As with the rest of this series, the way how this film was shot was top class, although I wasn’t too sure on the arty farty bits with the ping pong balls, the feathers and the bubbles. That was a bit too much for me.

The bit where Harris was ‘transported’ to the Monte Carlo rally was super cool though, and it really helped to add another dimension – no pun intended – to the film. Harris drives the mountain roads, stating that this is where the Alpine belonged, but he had little time to look at this French sports car through rose tinted glasses. This is because Eddie Jordan is on hand to act as co-driver as he and Harris take part in the famous Monte Carlo rally.

Well…that was until their race was brought to an abrupt stop due to an electrical failure. This failure soon turned in to a fire, causing the pair to jump out, fearing for their lives. Not a good advert for Alpine, but the French brand stated that the car tested was a prototype. Still, that must have been quite a scare for those involved.

Does A Manford Crap In The Woods?

You may have noticed that I didn’t write about the celeb guest last week, but that’s mainly because I found a bit dreary. Hell, I can’t even remember who last week’s guest was. Anyhoo, this week featured comedian Jason Manford, as you can expect, it was pretty good banter. After hearing about his patchy car history, the northern comic had revealed he had once needed to take a dump in the woods after a dodgy bit of chicken after a gig. Whoever said show business is dead? As much as it was a decent interview, I still question whether this segment is needed. True, it’s better than the rallycross style if you ask me, but I think this segment works better when you have two guests as it adds a more competitive element. I don’t think this segment is going anywhere fast, but I’d be happy sacrifice it to make way for a another film in the episode.

Harris Is Announced As A Serial Killer

This headline will make a bit more sense in a bit, bear with me. We go back to the SUV challenge and after Reid’s success in the first challenge, he starts at the front for the final race. Harris, who has a similar, but different XC60 was second, and LeBlanc was stone dead last. Reid has a blazing start to the race, which is just as well as he was a bit cocky at the start line, but it all goes wrong after he takes the wrong turn. Well, he didn’t take the turn at all, which was part of the problem.

This opened up the door for Harris to take the lead, but LeBlanc was hot on his heels and it quickly looks as if it’s two horse race. LeBlanc soon the grabs the lead in his Stelvio but Harris is in no mood to gives up. And Reid? Well soon finds himself having to avoid sheep and pheasants as he desperately tries to get back in the race.

Heading back to the actual race, things soon get a bit bumpy, meaning that Harris was able to get back in to the lead, but soon the going gets really bumpy. To the point that the cars are taking hits so severe, if this was a boxing match, it would be finished early. Frankly I’m staggered that the brands allowed their cars to be battered in such a relentless way. Still, it was rather good entertainment, but things weren’t so good for Harris, as this terrain meant he broke another car. I’ll leave who won as a surprise, but I wouldn’t put my money on Harris…

In case you’re not counting, that’s the third car he’s killed in this episode. This leads LBlanc to dub his esteemed colleague as a serial killer. Maybe that means he’ll have to do next series in a Hannibal Lector style mask? Speaking of which, that’s the end of series 25. This series was better than what I had expected and it’s seriously made me consider which I prefer, this or The Grand Tour.

I actually discussed this issue (with the help of fellow YouTuber Pocket Rockets) the other week on my YouTube channel. Check out the video here, and be sure to get involved!