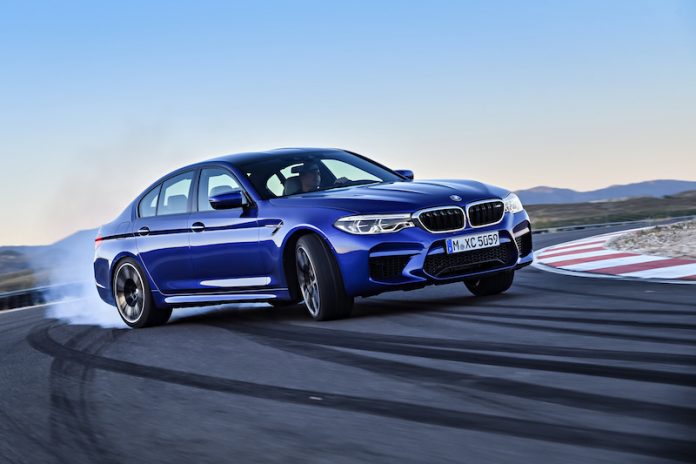 It’s safe to say there has been a lot of anticipation surrounding the new BMW M5. After months of teaser pictures, dribs and drabs of information, the sixth generation on what some would call the definitive performance saloon has now gone on sale. It’s priced from £89,645, and features a new eight-speed auto gearbox, an uprated version on BM’s 4.4 litre twin turbo V8, and course, that all wheel drive system.

Has The M5 Gone Soft?

Up until now, the BMW M5 – and indeed other M Performance saloons – have been rear wheel drive. Not the new M5 though, this will have power fed to all four wheels thanks to BMW’s xDrive system. So you could be easily fooled for thinking that the M5 is look to retire to an armchair, wearing a nice pair of comfy slippers.

Hold on just a minute though, because underneath the muscular yet subtle body lies a 4.4 litre V8 petrol which offers no less than 592bhp and 750Nm of torque – 70Nm more than previous version – with the help of two turbochargers.

It’s also worth mentioning that although the car starts in all wheel drive system, the car can be reverted back to rear wheel drive for some old school tail happy driving if desired. BMW is keen to stress this is for track driving only though. Mind you, it’s worth mentioning that the xDrive will only force the front wheels to join the party when the extra grip is needed, so don’t think it’s going to be all understeer-y.

Whether you’re on the road or on track though, the engine will be able to propel you to 62mph in just 3.4 seconds, which I think is out of this world for a car that has four doors, a roomy cabin and a decent sized boot. Predictably, the top speed is limited to 155mph though, but that’s bound to be plenty for most people.

As well as a more powerful engine, and new all wheel drive system, the new M5 benefits from a new 8-speed M Steptronic automatic transmission with Drivelogic. BMW states that this new auto is able to offer “extremely quick” shift times, and the speed of the changes can be altered using the Drivelogic gear shift lever on the gear selector. Mode 1 is best for sedate driving, offering smooth changes for better comfort, whilst mode 2 is better for faster, more spirited driving. Mode 3, as you have probably guessed, is the most extreme and is best used for track for the quickest changes possible. Naturally, you can use the paddles on the steering wheel if you want to control the changes yourself for more involvement. Speaking of track use, the new M5 features an integrated oil cooler for the gearbox, meaning that it ought to take the abuse that track driving can have on the transmission. Also, thanks to a higher final drive ratio, this new gearbox is more fuel efficient than the one used in the previous model.

As  with any sporty car, the BMW M5, offers three different driving modes, Efficient, Sport and Sport Plus. Naturally, the car becomes more extreme as you go through each driving modes, and that’s not the only thing that can be altered. Both the steering and the adaptive dampers have three driving modes as well, but instead of ‘Efficient’, you have ‘Comfort’ instead. The steering has been tweaked too, offering better driving dynamics, plus the chassis features lower, stiffer anti-roll bars. No matter which mode you go for, you’ll be able to enjoy a premium cabin with typically Germanic build quality and finish. The seats are trimmed fine grain Merino leather, and featured electric adjustment with memory function, plus they’re heated too. Then again, I suppose you would expect that, given the car’s cost.