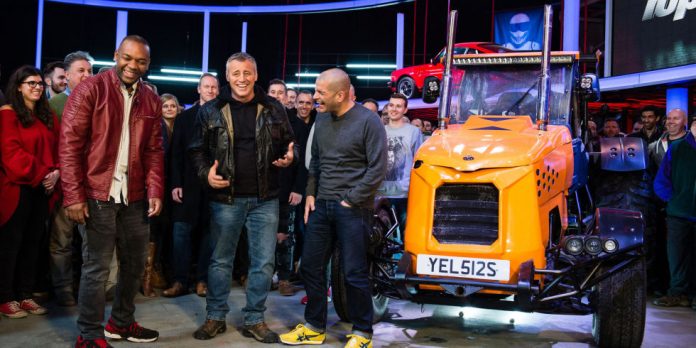 It feels like this series of Top Gear has really found its, well, gear, but we are already near the end of the series. I’d never thought I’d say this since Clarkson, Hammond and May left, but I’ll be sad when this series finishes. That is then, this is now – what featured on this week’s episode? Well, Matt LeBlanc drives the Ferrari 812 Superfast, Rory Reid drives the outlawed Chevrolet Camaro ZL1 1LE and LeBlanc and Chris Harris team up to improve tractors. Warning, there are likely to be spoilers in this review.

We start this week’s episode in Italy, and strangely LeBlanc is driving a very un-superfast Piaggio Ape. He stresses that some brands, such as Piaggio are able to make a successful car at the first attempt, unlike Ferrari – that’s not a diss by the way. What the American is striving towards, is that Ferrari has always been working towards perfection, never quite happy with the latest model.

That leads us very nicely on to the new Ferrari 812 Superfast, which as LeBlanc points out – like many others have – is a rather stupid name. He does also say that it’s very literal, like naming “your new dog, dog”. Sprinkle in Top Gear’s high standard of cinematography and you’ve got a very engaging film, which is saying something as for some reason I don’t really care for the Superfast. I think it’s the styling and the name that kinda puts me off. Am I crazy? Probably.

Speaking of crazy, LeBlanc suggests that it’s a bit mad that Ferrari has dubbed this a grand tourer, as the car seems too much on the other end of the spectrum. He then goes on to say that if anything, the new Superfast is a bit too, well, fast for the roads – cue Imola. Although the famous Imola racetrack is a better place to really test the 812, LeBlanc goes on to say that your average driver will not be able to really make the most of the car.

After a bit of persistence, this leads The Stig to have a go, which is good as it feels like The Stig has been a bit of a forgotten character in parts of this series. He actually goes on to feature in this episode again, so maybe they are making up for lost time? As expected, The Stig was able to really push the 812 to its limits, leading LeBlanc to say that the problem is not with the car, it’s that humans need to improve to the 812’s high standard. A strong start to this episode.

Last week LeBlanc took out the super powerful, supercharged Dodge Demon – this week it was the turn of Rory Reid to take out a supercharged V8. Only this time, it comes from Chevrolet, and it’s so extreme, that it cannot be sold in Europe. As you can imagine, Reid is like a pig in you-know-what. The Chevrolet Camaro ZL1 1LE (catchy name) may not be as powerful as the Demon, but it makes up for it with things that can actually make it corner. It has canards and a big rear wing for better downforce, it has tyres which too Goodyear three years to develop, and it has suspension taken from a Le Mans racer. This is serious stuff, although that doesn’t stop Reid having fun taking it sideways – why wouldn’t you? It’s not all fun and games though, as he is set the challenge of trying to get a lap time in around 1 minute 40. He has a go and….he fails, getting a time of 1 minute 51. It seems as if he needs a bit of coaching then… This cues Sabine Schmitz to make a superstar entrance in a helicopter to give Reid a helping hand. This turns out to be pretty intense, so rather than me, but after some, erm…firm coaching, Reid smashes it, but Schmitz is not done. She takes the lead in the driver’s seat and completely rains on Reid’s parade. Well, that’s not very lady like is it? I enjoyed this film, but I want to see more films which feature all three presenters in as I feel that Reid is on the periphery sometimes.

The show ends with LeBlanc claiming that Top Gear had been on a mission to banish Britain’s roads of a real menace. At first, I thought they meant potholes (have you ever driven in Surrey?!), but no, what he is really on about is tractors. Ok, I get that, we’ve all been stuck behind a tractor at some point. LeBlanc and Harris demonstrate this by taking to the road in a traditional tractor, and antagonising what seemed to be all the of the UK’s motorists that were lined up behind them.

After a cringeworthy drive, LeBlanc drops Harris off after arriving at a farm to improve the tractor, whilst Harris is left to get the bus home…which comes every Wednesday, and it’s Thursday. That’s a gag of course, but I tickled me nonetheless. I’ve really enjoyed the chemistry between LeBlanc and Harris this season, and it really feels like there is a bit of a bromance here. That aside, LeBlanc emerges from the dark with a new improved tractor, or should I say, Track-Tor. Track, is because that is where it is able to shine, thanks to a 5.7 litre V8 engine underneath the bonnet, which is, according to LeBlanc, the fastest colour in the world, Lamborghini Orange. After showing off his toilet brush to Harris (this will make sense when you watch it), he invites him for a spin. The way in which Harris’ eyes almost pop out their socket when they set off shows the terror of this drive.

Mind you, I’m not sure what was worried about, as it looked rather fun from when I was sitting, but I suppose when you in the cabin, it’s a different story – good thing they had the toilet brush, eh? Feeling confident, LeBlanc decides to break the land speed record for tractors, and after scaring Harris half to death, they actually manage it.

Not content with that though, the pair are happy to take up the gauntlet thrown down by the producers to prove that the Track-Tor is a proper tractor. There needs to be some competition though, which is just as well farmer of the year, Robert Neil. They go on a few head-to-head challenges, which although not car-based, are rather good fun to watch. The main challenge though, involves The Stig, some carrots, and…Captain Birdseye. I will leave that as a surprise for you…

Episode 5 delivered another strong effort from the Top Gear team, and although a good chunk of the episode involved tractors and not cars, it was a good watch. This series of Top Gear has been fantastic so far, and in fact, I would stick my neck out to say that I feel TG is better than The Grand Tour. As a big fan of Clarkson, Hammond and May, that is not an easy for me to say.

If you want to hear more about my thoughts on the Top Gear v The Grand Tour debate, then why not check out the below video.