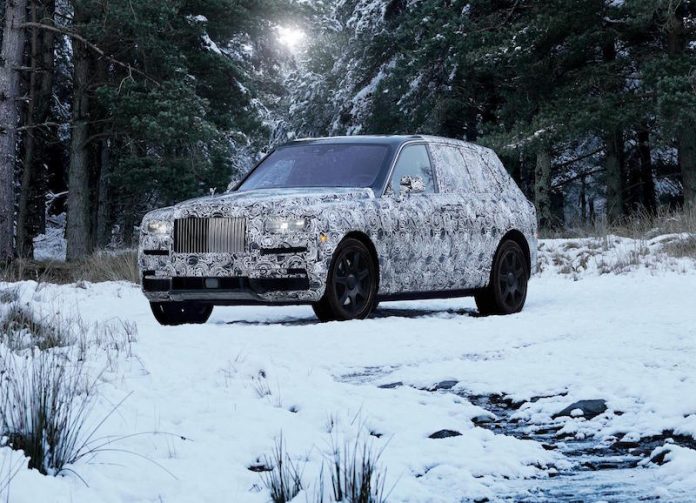 If someone told me that luxury brand Rolls-Royce was to make an SUV, I would scoff. I would declare them barmy, but low and behold, the prestigious British marque has announced the name for such a car. Mind you, if an SUV is good enough for Bentley, then why can’t RR jump on the bandwagon.

That is how Torsten Müller-Ötvös, Chief Executive Officer of Rolls-Royce, described the name for the new “high-bodied car” – seems as if the phrase “SUV” is too common. Speaking of which, the name chosen is ‘Cullinan’, which was the project name for the car, hence Müller-Ötvös’ ‘hiding in plain sight’ remark. No other real details have been revealed as of yet, so we have that to come, but a few teaser pictures have been revealed to keep out tongues wagging. Although it’s difficult to tell with the camo on it, but it doesn’t excel on the wow factor. To my eye it all looks rather boxy, but I’m sure it will look much better once the production version is unveiled. What has been revealed though, is that the new model will share the shame aluminium spaceframe ‘Architecture of Luxury’ platform as the new Phantom.

What Else Doe Rolls-Royce Say About The Cullinan?

“The name Cullinan has been hiding in plain sight since we revealed it as the project name some years ago,” comments Torsten Müller-Ötvös, Chief Executive Officer of Rolls-Royce. “It is the most fitting name for our extraordinary new product. Cullinan is a motor car of such clarity of purpose, such flawless quality and preciousness, and such presence that it recalibrates the scale and possibility of true luxury. Just like the Cullinan Diamond, the largest flawless diamond ever found, it emerges when it is perfect and exists above all others.”

“We were inspired by the epic processes, over many millennia, which went into the creation of the Cullinan Diamond. The name embodies the many facets of our new motor car’s promise. It speaks of endurance and absolute solidity in the face of the greatest pressures; it tells of rarity and preciousness and it alludes to the pioneering, adventurous spirit of The Hon. Charles Rolls and the engineering innovation of Sir Henry Royce; and, of course, it speaks of absolute luxury, wherever you venture in the world” continued Müller-Ötvös.

Müller-Ötvös concludes: “Quite simply, the name Cullinan is perfect and brilliant.”