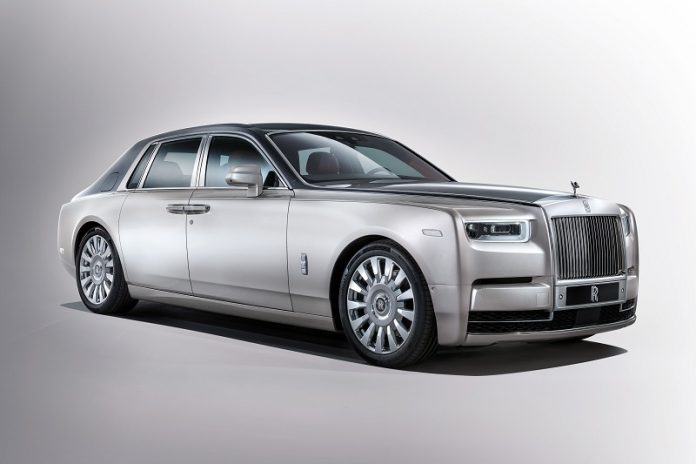 Roll back the clock all the way to 1925. It was the year Sir Henry Royce unveiled the first ever Phantom to the world, before it was proclaimed to be the best car (a lot of) money could buy. In fact, each generation of the Phantom has at one stage been deemed to the best the car in the world, so the eighth model of the generation has got rather large Oxfords to fill.

Old Techniques, But Not Old-Fashioned

We all know that Rolls-Royce is renowned for offering the highest quality coachbuilding, but that’s not to say that the new Phantom will feel like it’s come from the last century. Yes, it keeps the traditional Rolls-Royce shape that we’ve come to know and love, yet it looks modern and current. The front end looks sharp but at the same time elegant, with spirit of ecstasy forever standing proud upon that vast bonnet. For the first time, the grille has been integrated in to the surrounding bodywork to create a cleaner, seamless look. Underneath the hood lurks a new 6.75 litre twin-turbo petrol engine that is capable of throwing out 563bhp with 900Nm of torque that comes in at a mind-boggling 1,700 revs. That’s bound to get Jeeves a bit excited. Despite this massive amount of power, the Phantom will never shout or even project its voice. Thanks to 130kg worth of soundproofing, the new Phantom is now the quietest car in the world. Crazy when you consider what the car is powered by. Oh, and it’s 10% quieter than the previous Phantom, which was hardly the type to go around barking it’s head off.

The brand may come from a historic and traditional background, but buyers will still be treated by the latest technology. In fact, Rolls-Royce has dubbed the new Phantom as the “most technologically advanced Rolls-Royce ever”. Safety systems such as alertness assistant, collision warning, lane departure warning are fitted, plus there is a 4 camera system with panoramic view to make sure you’ll have little problems moving the vast beast in small places. The new Phantom also features four-wheel steering, which once again will help with maneuverability. On top of that you’ll also get a wi-fi hotspot and your usual mix of navigation and smartphone connectivity, plus there is also an industry leading head up display – fancy. Needless to say the Phantom will be a very nice place in which to sit whilst your tweet about your Roll-Royce experience without trying to brag too much.

As well as offering a near silent driving experience, Rolls-Royce has promised that its new Phantom will offer a ‘magic carpet’ like ride. This is all down to the all-new aluminium  spaceframe architecture, which has allowed the new model to be lighter, stiffer as well as quieter. It’s 30% more rigid than its predecessor, but that’s to say that’s at the sake of comfort of course. Air suspension is also to be found in the new Phantom, plus state-of-the-art chassis control systems have been put in place, so you needn’t worry about spilling your champagne when the car hits a pothole. This new platform will serve as the bedrock for all future Rolls-Royce model as the brand stated it wants to take a different route to other luxury manufacturers that use a monocoque chassis for its cars.

The Cabin To End All Cabins?

As you would expect from a Rolls-Royce, the inside extremely plush and luxurious. But what exactly goes in to the new Phantom? The sumptuous leather seats have been handmade to deliver the highest comfort, but that of course is not the only place where leather can be found. There’s also a fair bit of wood as well as the traditional clock on the dash, which features a dark face and is surrounded by black leather. The rear of the car features the largest Starlight Headliner, which isn’t my cup of tea, but each to their own I suppose. Talking of beverages, there is a drinks cabinet as well as a coolbox, oh how the other half live. The rear seats are angled so occupants are able to hold a conversation without straining their necks and the seats themselves have different options for layouts to ensure passengers are able to find their best position.

Peter Schwarzenbauer, Chairman of Rolls-Royce and Member of the Board of the BMW Group said, “The global introduction of a new Rolls-Royce is always a very special moment within the BMW Group. This particular occasion is all the more special because we are introducing an all-new Phantom, the flagship of the Rolls-Royce brand and the world’s foremost luxury product.” New Phantom is a powerful statement of design, engineering and Bespoke expertise and I am delighted with the response we have received from our many highly discerning customers worldwide. The BMW Group remains fully committed to the future of Rolls-Royce Motor Cars and is proud of the many achievements made by the brand since its acquisition.”

Prices for the new Phantom at yet to be confirmed but the car is to go on sale early next year.