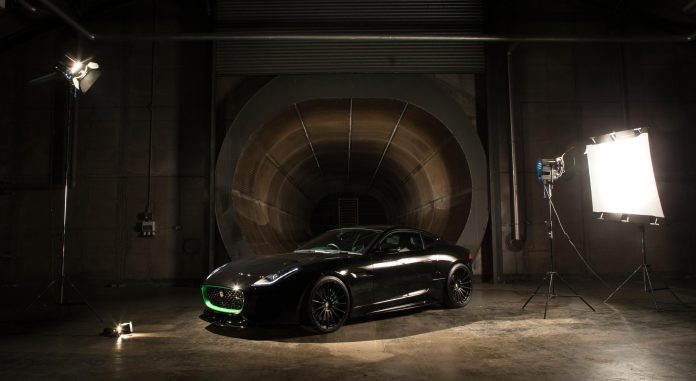 On the face of it, the car you see before you looks to be a tarted up Jaguar F-Type. However, it’s a bit more than that. What are you are in fact gazing upon, is the new Lister Thunder, the brand’s first new model in the 21st century. Blimey, it took them long enough didn’t it?

The Devil Is In The Details

Lister is yet to reveal full details about the performance, but what the 65-year-old brand has stated, is that the limited run of 99 models will feature the car’s standard 5.0 litre V8 engine. This is bound to be enough shove for most people, but just in case, Lister has fettled the engine to give it more power – 666bhp in fact. That figure makes this the most powerful model Lister has made in its history. This beastly power will propel this British brute to 62mph in under 3.0 seconds and then it will keep roaring until it maxes out a top speed over 200mph. It’s not just the performance that Lister has attended to, as you’ll note the body looks more devilish as well. The front features a custom made bumper made of carbon fibre which complimented by an extended splitter for better downforce.

The rear also receives a carbon fibre bumper and beneath it lie enlarged Lister carbon exhaust tips, which the brand states emit a “thundery note”. A carbon fibre bonnet is also available as an option and buyers with standard F-Types can even order the carbon fibre kit as a retro fit option, which will cost £19,950. What’s It Llike Inside?

Inside the car you’ll find plenty of leather which has been provided Bridge of Weir, and is the brand’s finest Nappa leather, which is available in up 36 colours. No matter which shade you go for, you’ll find this luxurious material wrapped around dashboard, door cards, roof lining and the steering wheel are all hand stitched in matching Nappa leather. This then finished off with contrast stitching which echoes the accent found on the exterior styling.

Needless to say, this is a rather bespoke car, and as a result it has a bespoke price to go with it. If you fancy ordering the new Thunder then you’ll need to write a cheque for £139,950, which is fair bit more than an F-Type SVR. Lister clearly believe in the product though, and it will be interesting to see the full details of the car when it gets publicly revealed at the 2018 Historic Motorsport International at ExCel, London, on Thursday 15th February. What Does The Brand Have To Say?

Speaking of the exciting new Thunder’s launch in mid-February, Lawrence Whittaker, CEO of the revitalised Lister Motor Company, says “We came to the inaugural ExCel show last year and it was one of the best shows we have attended, quickly selling a new Knobbly whilst on the stand!” He continues “That is why we have chosen this year’s follow-up event at ExCel to launch the exciting new Lister Thunder, which will mark the first car from our revised Jaguar tuning programme.”

Whittaker adds, “Like Brabus and AMG with Mercedes and Alpina with BMW, we are hoping to become synonymous once again with tuning Jaguar vehicles, giving customers new enhanced, bespoke performance and design alternatives to Jaguar’s acclaimed model programme. Although we are not directly affiliated with Jaguar Land Rover, Lister has a Jaguar tuning heritage dating back 65 years. Our new Lister Thunder is the fastest and most powerful Lister ever created with a 208mph top speed and 0-100 time of just 6.8 seconds. I am utterly proud of what we have achieved, and the Thunder is just the beginning!”