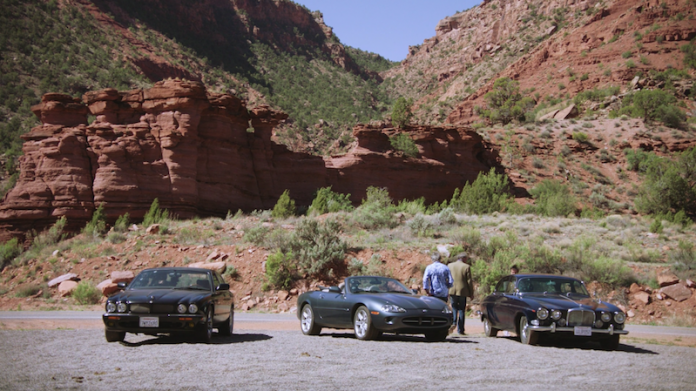 This week brings episode 6 of The Grand Tour’s second helping, meaning that we are now halfway through season 2 – where has the time gone?! Before you know it, the season will be over and we’ll be sad again. Well, until Top Gear comes back – yes, I said it. This week’s episode was very Jag-orientated, so I hope you like big British brutes. As always, there are likely to be spoilers, so you’ve been warned.

The Grand Tour has been criticised for its quality and execution of gags over the last two seasons, but I challenge anyone to watch this episode and not laugh. I don’t think it’s possible, unless you have absolutely no sense of humour. The main theme of this episode, as you would have guessed from the episode name is Jaaaaaaaags. Clarkson, Hammond and May head to Colorado to drive three old Jags to prove that are worthwhile despite low sales compared to German cars. We start the film with Clarkson in his choice of wheels is a supercharged XJR, which he described as “caddish without being laddish”. He then meets May who has chosen a XK8 convertible, which then leaves Hammond, who turns up in a rather villainous 420G. It may look tired and a bit past it, but it did look rather impressive – and imposing. Not quite as impressive as the scenery in which the trio had been placed in. Predictably, the trio start to bicker about which car is the best and which car is the worst, before they then inspect Hammond’s car. He takes them around to the boot, which he describes as having plenty of room for “borrowed oil paintings” and then the trio joke that the toolbox is actually more useful for thieves than mechanics. Already, I can sense this is going to be a good film… The three of them set off on to the stunning road and in doing so, they talk about some of the ‘character’ of their cars. Clarkson, for example, has no traction control or stability control as it has failed, whilst Hammond has dodgy wipers and a glovebox that won’t stay closed. May on the other hand, may have the wind in his hair, but he has an engine warning light and brakes that cause the car to judder when they are used. They then have to stop because Hammond’s car, needs to have a ‘smoke’. This will make more sense when you come to watch the programme. Oh, and then Clarkson’s gearbox failed… This was bound to be a concern as the first challenge was to thrash the cars around a dirt racetrack. This scene delivered that may have been my favourite line in the episode. Whilst Clarkson had to pour some more fluid in the car, May piped up with; “It’s like watching a really, really old drunk pour himself a scotch”. I laughed so hard, I struggled to get my breath back – no exaggeration.

The three then take to the racetrack and they all take different approaches to their driving style. Predictably, one of them was fast and furious, but what was less predictable was which one of them delivered the gung-ho attitude. So gung-ho, that they needed a new car as they binned the one they started with.

Conversation Street Takes The Roof Off

Conversation Street has always focussed on car news like the three of them like to on Top Gear, and this is something I’ve touched upon before. This was the case once more this week, but because to me it was genuinely good banter that felt organic, I didn’t mind so much. The main topic for discussion this week was the fact that it seems like the fire brigade are all too happy to rip the roof of a car, even when it doesn’t seem to be needed. The trio tackled this issue with their typical brand of humour, and once again my cheek muscles were getting a good workout. We head back to Colorado where we see Clarkson, Hammond and May checking out early of their hotel with plenty of hotel-branded goodies. Well they’re in Jags – frankly it’d be rude not too… They head back on the road, but it’s not too long before Hammond has a problem with his newly acquired XJ6 – yes, he was the one who binned his Jag earlier. In typical GT fashion, Clarkson and May leave him behind and head off towards the next challenge.

Between them and that though, Clarkson has the awkward moment of being stopped by the Colorado 5-0, and Hammond has even more engine troubles with his XJ6. Who ever said old Jags were unreliable??? Despite this, all three make it to a local airstrip to see who can get to to 0-100-0 the fastest. This looks to be a doddle for Clarkson’s supercharged XJR and as for the other two? Well… they struggled, especially James.

This week’s theme for ‘Celebrity Face-Off’ was Hollywood actors that have the middle name of George. No, I’m not making that up, that was genuinely what it was. This meant we had the pairing of Kiefer Sutherland and Luke Evans, who have played roles in action films so this could well make for an interesting one. Indeed it did, but for me Sutherland stole the show which his impressive stint behind the wheel of the 2.0 litre F-Type.

The way how he was able to handle the car was super cool and composed, he simply looked unflappable in the cockpit. This made for a tidy, but more importantly, fast lap. In fact, I may be mistaken here, but I think he was able to put in the fastest lap of the season so far. Evans’ lap was a decent effort but it was a bit wilder than Sutherland’s and he paid the price with a lap that was around four seconds slower.

Who Needs Skis When You Have Jaaaaaaaags?

The last part of the Jag films is where things get really interesting – and rather treacherous. Clarkson is the only one left in his original car, with Hammond in his XJ6 and May in a XJS, which replaced his XK8. The three of them need to drive up a large ski slope, only to go all the back down it again. With their cars being rear-wheel drive, getting up there in the first place is quite a struggle, so they form what Clarkson refers to as a “human centipede”.

After some bickering and some laugh-out-loud cocks up from the trio, that make it to the summit which is over 12,000 feet high. The challenge now is for them to down it without rolling their cars several times in the process and turning in to a massive fireball – yes Hammond, looking at you here. The whole scene is exciting to watch as it genuinely looks dangerous, although it does look like a bit of fun too in the right places. Once the terrain smoothes out it becomes easier for them to manage the slippery surface, and Hammond and Clarkson even start to race each other to the bottom. Things are less than perfect for Captain Slow though as he develops brake problems halfway down, meaning that his arrival at the destination is rather…dramatic.

All-in-all a cracking episode this week, even though it was mostly the three of them mucking about it old jags. What I loved about this show as it just felt more organic, and the gags didn’t seem so forced or scripted. In short, it felt real and that makes a lot of difference if you ask me. Sure, there were still scripted gags such as May’s crash but on the whole, this episode really hit the sweet spot. This felt more like the glory days of Top Gear, and that can only be a good thing of course. If I really wanted to be picky, I wished the challenges for the Jags were a bit more structured and that there was a traditional scoreboard at the end, although that wouldn’t really work considering two of them had to change cars throughout. This matters very little though as this is easily the funniest GT episode to date. My cheeks are still aching.