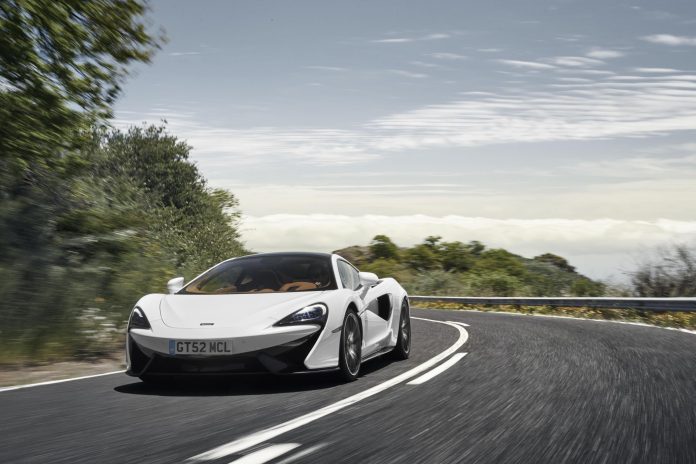 Introduced in 2016, the McLaren 570GT was offered as a softer, more practical alternative to the 570S coupe, but now it seems buyers want it to have a bit more bite. This is according to the British performance brand, which has now announced it’s to offer a ‘Sport Pack’ to help bring it in line with the 570S Couple.

So, It’s Essentially A 570S With More Luggage Capacity?

No, its erm – well you see, it’s erm. Yes, it’s basically a 570S with more space, however, that is by no means a bad thing. If anything this adds more flexibility to McLaren’s range as it now appears you can have your cake and eat it. This means if you opt for select the Sport Pack you’ll receive carbon-ceramic brakes as well as a faster steering rack and tyres wrapped in Pirelli P Zero tyres. Also part of the Sport Pack are revised damper actuators and uprights that are the same as those fitted to the Coupé and Spider. MSO (McLaren Special Operations) has joined in as well, and is offer a new optional driver-controlled variable-tint electrochromic panoramic roof. If you’re scratching your head trying to wonder what on God’s green earth that means, let me simplify matters for you. What it means, is that you can change the opacity of the tinted glass within the roof, so you can either have it completely clear, or you can have it tinted to help keep the sun from burning you alive. That’ll be dead handy for gingers… “The McLaren Sports Series is already recognised for bringing the excitement and race-derived technology of a supercar to the luxury sports car market, a reputation that was further enhanced by the recent introduction of the 570S Spider. The changes for 2018 make every model in the range even more compelling; customers attracted by the McLaren blend of lightweight, carbon fibre construction and mid-mounted, twin-turbocharged V8 engine combining to deliver thrilling performance, can now choose from an even wider range of colours, materials and features. “Additionally, with the new 570GT Sport Pack, we have reacted to market requests for a 570GT with the driving dynamics of the 570S Coupé. This optional handling package gives the same chassis setup as the Coupé, while retaining the luxurious features, luggage space and looks of the 570GT.”