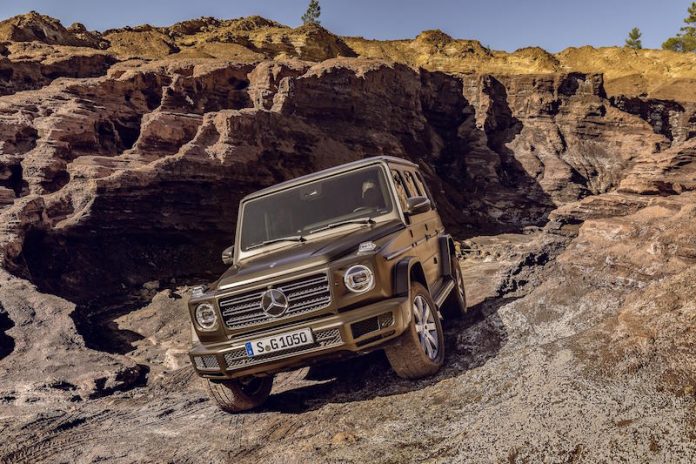 You may not know it, but the Mercedes G-Class is the longest running model series from the German brand, and in truth that showed a little as the previous model was looking a little tired on the inside. Today, however, Mercedes has revealed its successor, but what has changed? Read on to find out more about the  brand new Mercedes G-Class.

One of the major changes to the new G-Class is the interior. The previous model wasn’t exactly a cave inside, but compared to the new model it does look somewhat dated. There is no such problem with this model though – one of the first features you are drawn to are the two massive 12.3″ displays that makes up the ‘Widescreen Cockpit’. That’s not to say that G-Class has forgotten its roots though as you’ll still find the famous front passenger grab handle and the three differential lock switches are still finished in chrome. Beyond that though, the inside is very much looking forward, with a good mix of premium material used throughout, which have been put together by hand. Thanks to a body that is 53mm longer and 121mm wider, there’s almost more room inside for occupants, and although the specification for UK cars is yet to be revealed, Mercedes has stated that the seats will be trimmed in leather (naturally) and all seats will be heated.

Careful work has been made by the Merc engineers to ensure that the new G-Class is not only better off-road but also on it as well. Thanks to a crash diet and aluminium used for the bonnet, doors and wings, the new model is around 170kg lighter. This means a more dynamic drive, but don’t think it’s going to flop about like a wet cardboard box. The car may be lighter, but it’s actually around 55% stiffer.

The new model will have a choice of five driving modes; normal, sport, eco, individual and G-mode. They’re all pretty self-explanatory apart from G-mode, which is automatically engaged when either diff locks are turned on or when the gearbox is put in to low-range. This sets the G-Class up for some proper old-fashioned off-roading by adapting the adjustable dampers, steering and throttle to maximise the car’s off-road capabilities. Helping to deliver the power to all four wheels will be a 9G-TRONIC automatic gearbox with torque converter, but at present Mercedes is yet to confirm which engines it will be attached to for the UK market. In the meantime, I can tell you that Germany will have a choice of a 4.0 litre Biturbo V8 petrol, which is able to deliver 416bhp with 610Nm of torque.

As well as the new driving modes and the new gearbox, the suspension has been updated, with the front receiving an independent set up, which is the result of the collaboration with Mercedes AMG. Despite this, the car should still cut it off road as the ground clearance has been increased, and the G-Class is able to wade up to 70cm through water and mud – 10cm than previously. It’s also able to able to tackle steeper angles, so don’t think it’s all show and no go.

There Is One Thing Though…

The new G-Class has ditched its hydraulic power steering set up and instead its gone for an electric setup. This may disappoint some die hard fans, but Mercedes has stated this setup uses less energy, plus it allows the car to be fitted with features such as Parking Assist. The steering feedback will also be influenced by which driving mode you have it in, and Mercedes has described the system as “direct as possible, as indirect as necessary”.

UK prices are yet to be confirmed, but the price for the German market has been announced as €107,040.50. The car is not available to order just yet, but the German brand has declared that UK customers will get their models in the summer.