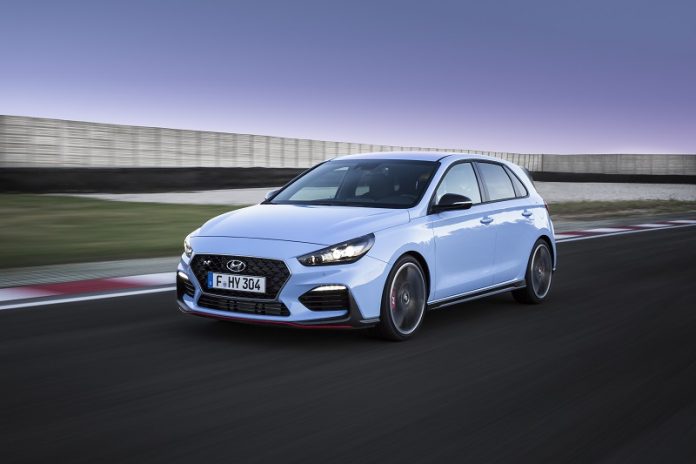 I’m completely aware I’m a bit behind the times on this one, but as I’m a hot hatch fan I wanted to cover this bit of news regardless. The Hyundai i30N is the hotly anticipated hot hatchback from the Korean brand, and it’s also the first one its made, so there is a fair amount of expectation.

Well, the i30N will be offered in two forms, standard i30N and i30N Performance, which are priced from £24,995 and £27,995 respectively. This puts it on par with rivals such as the VW Golf GTI, the Ford Focus ST and the brand new Renault Megane RS, which is yet to have its prices announced. So the price is competitive, but what about the performance? Both models are fitted with a 2.0 litre turbocharged petrol which is mated to a 6-speed manual gearbox with power fed to the front wheels. In the standard i30N you’ll get 247bhp with 353Nm of torque, but the Performance model will be able to offer a more competitive 271bhp – same amount of torque. This may not be the fastest in its field, but it’s more than its cousin, the Kia Pro_Cee’d GT.

No matter which model you go for, you’ll be able to hit a top speed of 155mph, although the Performance model will hit 62mph in 6.1 seconds whereas the standard model will complete the same sprint in 6.4 seconds. It’s not just better acceleration you can expect from the Performance model, it also offers buyers larger brakes as well as bigger alloys, which are shod in Pirelli P Zero tyres. The Performance model also adds an electronic limited slip diff, an active variable exhaust system for some lovely crackles and pops, plus the inside is treated with leather and suede seats which can be adjusted electronically.

Both models come with standard kit such as 8″ touchscreen with navigation and smartphone connectivity, plus it has N specific functions such as drive mode display, suspension, engine and transmission set up, lap timer, and performance gauges to name a few. Launch control is also standard as is a rev match function Brake Control knock back pre-fill to maximise braking response after high g-load cornering. The i30N is available in 6 colours – Clean Slate, Polar White, Micron Grey, Phantom Black and Engine Red. Alongside these there is also a new N specific colour of Performance Blue, inspired by Hyundai Motorsports WRC and TCR programmes.

Tony Whitehorn, President and CEO Hyundai Motor UK said, “We are incredibly excited about the arrival of Hyundai’s first high-performance model under the N line-up. As well as the great value that our customers expect, the i30 N offers advanced technology and a high level of driver customisation – meaning it can play the role of comfort-oriented commuter as well as race track-ready performance car.”