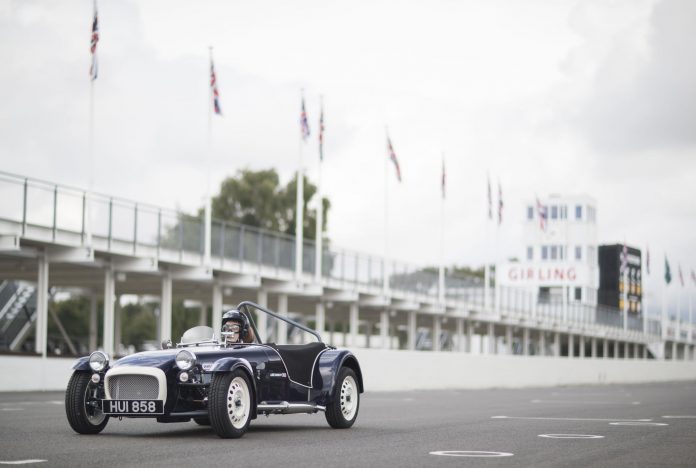 Ok, I’ll admit, pretty much every Caterham is retro-inspired to a certain degree. In fact the 270S I drove earlier this year was brand new, but could have passed for a model from yesteryear. The new Seven SuperSprint, however is more retro inspired than its more ‘standard’ Seven siblings.

Revealed at Goodwood Revival today, the new Seven SuperSprint will be made in numbers of just 60, which have gone on sale today at a price of £29,995. It can be ordered as either a single or two-seater, and will be powered by a three cylinder petrol engine that produces 95bhp. That may not seem like much, but don’t forget that your average Caterham will tip the scales at around 500kg. Plus, the base model 160S is living proof that you don’t need loads of power to have fun – that only has 80bhp.

The car itself has been created to celebrate 60 years of Caterham Car Ltd, hence why just 60 are being sold. This comes a year after the Seven Sprint was unveiled at the same event last year and turned out to be the best selling Caterham Seven to date. Back to the SuperSprint though, what features does it have? Available in six colour choices, the SuperSprint features a unique Brooklands windscreen, quilted and stitched seats trimmed in Innes tan Scottish Muirhead leather, a wooden-rimmed sports steering wheel, and a 1960s-style racing livery. All you will need to complete the look is a scarf, some driving gloves and of course, a mustache!

Going back to the paint options; they have all been named after classic race circuits, which is pretty cool. So for example, you have Aintree (green with orange noseband), Hockenheim (silver with red noseband) and Imola (red with white noseband).

Graham Macdonald, Caterham Chief Executive Officer, said: “Motorsport and the purist thrill of driving a lightweight race car is in the Caterham Seven’s DNA and are elements that run like a thread through every car we build today, 60 years after the first Seven was made.

See the car in action here.

“We started our 60th anniversary year with the glorious throwback Sprint – aimed at the more discerning chap or lady driver. As we approach the end of our year of celebration, it makes perfect sense that the car bookending the celebrations is a racer of a similar vein.”

Simon Lambert, Chief Motorsport and Technical Officer, added: “Like the Sprint, this is unquestionably the Seven Caterham would have developed if we had been here in the mid-sixties – and it benefits from being injected with the passion and power of the modern incarnation. The visual appeal of our new baby is only outclassed by a driving experience that puts you straight behind the goggles of Stirling Moss and Innes Ireland.”

On the topic of Caterham, I will be driving the new 360R next week, so look out for that review. I just hope the weather is a little better than it is now…