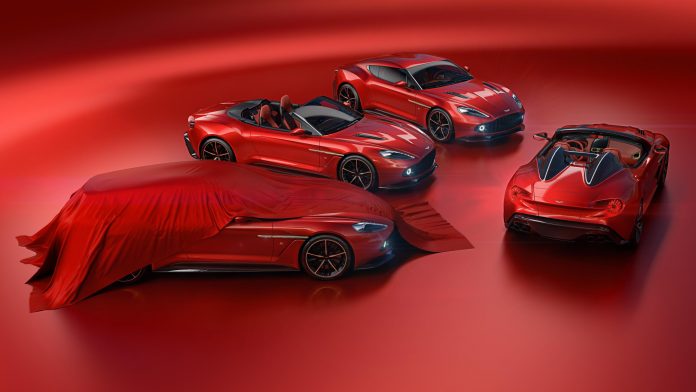 The Aston Martin Vanquish Zagato was easily the best-looking car to come out of 2016 in my opinion, and if that wasn’t enough, the British luxury brand released a Volante version to compliment the Coupe. Now though, Aston Martin and Zagato have joined forces again to produce two new variants of this drop dead gorgeous car.

The two new models include the two-seater Speedster or the Shooting Brake variant, both of which will be powered by Aston’s 592bhp V12 engine. Like the Coupe and the Volante, the Shooting Brake will be made in a number of 99 models, whereas the Speedster will be made in a number of just 28 – pity. These 28 have already been sold, so if you’re after one, you’ll need to keep an eye on the used car market – yeah, good luck with that.

The Speedster is just as pretty as the other models, but I’ll be honest, I’m not sure on the Shooting Brake. It just doesn’t look quite as svelte, and I think that the body shape somewhat ruins the beautiful lines offered in the other models. You know what they say though, beauty is in the eye of the beholder.

It’s also worth noting that the Shooting Brake is also a two-seater, which is a bit bizarre for a car of this type. You will get some decent luggage space in the Shooting Brake though; in fact the model even comes with a tailored luggage set, which can be loaded in to the car using the powered tailgate.

Aston Martin Chief Creative Officer, Marek Reichman, said of the Vanquish Zagato family: “We haven’t released Zagato models as a family before, at least not in this way, but the idea is not without precedent. Think back to the DB7 Zagato and DB AR1, or the V8 Zagato Coupe and Volante, for example. We’ve simply taken things a few steps further. Why create a family of Zagatos? Well, many of our customers want different things. Some prefer the purity of a Coupe, but others love the idea of something more extreme, like the Speedster. “And yes, some of them have ordered one example of each. There’s always an over-demand from our clients and patrons. We could easily fulfill demand for more cars than this, but we want Zagato to remain something very special. We’re creating collectibles, future concours cars. With only 325 cars worldwide, divided between 99 Coupes, 99 Volantes, 28 Speedsters and 99 Shooting Brakes – they are still the rarest of the rare.” Andrea Zagato, CEO of Zagato said of the enduring creative partnership: “Zagato’s relationship with Aston Martin began with my grandfather and the DB4 GT Zagato, almost sixty years ago. To have a creative ‘marriage‘ thrive for three generations is something as unique as the cars themselves. My family name is associated with all kinds of wonderful designs, but for many enthusiasts and collectors around the world those that combine the Z of Zagato with the wings of Aston Martin are the most special.

“Collaborating closely on the design of four complimentary, yet completely different Vanquish Zagatos has been an incredibly exciting challenge. I’m proud to continue the story my grandfather started and thrilled that our partnership with Aston Martin continues to realise such exciting cars.”