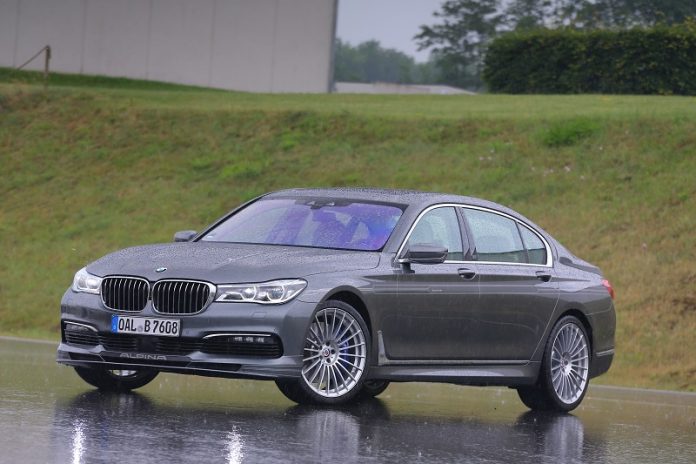 Have you ever looked at a BMW saloon and thought “Hmm, that needs more power”? I thought not, yet that is what Alpina has done with its new B7 Bi-turbo, which is now the fastest four-door production car in the world.

Yes, that is the burning question. Well, underneath that large, premium bonnet lies a 4.4 litre V8 churning out 608bhp and a Goliath 800Nm of torque. This means it will smash 62mph in 4.0 seconds and it will continue charging to a top speed of 205mph – 12mph more than the predicted 193mph. To achieve this large slice of German brute force the V8 engine has been heavily revised by the 70-strong engineering team at Alpina, and is helped along by two specially-developed twin-scroll turbochargers located within the cylinder banks. A new intake system has also been installed to give a better throttle response, plus the pistons and spark plugs have been uprated Alpina specifications. All this power is then fed through to a ZF 8-speed automatic gearbox. It’s Not All About Speed Though

This may be a machine that can rub shoulders with supercars, but the B7 Bi-turbo is also about luxury as well. The B7 Bi-turbo is handcrafted and made in small numbers, meaning that each model is bespoke to its buyer. The German brand states that there is an “almost limitless range of options and leather trims”, with UK cars offered with high-end Nappa leather as well as a leather-clad instrument panel. On top of this, the B7 Bi-turbo soft close doors, head-up display, a rear view camera and doors sills with a blue glow. To complete the look, each model will be given a production plaque marking which model number it is; this will be displayed on the centre console. “Not long ago, only the most focussed £million hypercars could touch 200 mph. Where road conditions allow, owners of the new B7 Bi-Turbo can cruise long distances at that legendary speed. with friends and family in considerable comfort,” says ALPINA GB brand manager Gary Lott. “Remarkably, ALPINA has achieved this alongside superb ride quality and refinement at lower speeds, and all for just £115,000.”