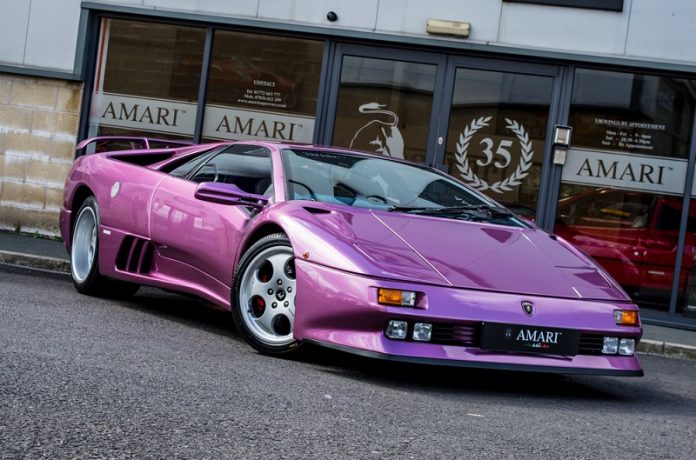 It’s no secret that Jamiroquai frontman Jay Kay likes his motors. He has been a regular guest on Top Gear, and the last time he appeared on the BBC show he spoke about the famous Lamborghini Diablo used in the video for Cosmic Girl. For those of you that haven’t heard the story, it’s a rather interesting one…

If At First You Don’t Succeed…

The Diablo in question is a viola-metallic ’30 Special Edition’ of which 150 were built, with just 16 produced in right hand drive. The car for sell here wasn’t actually the first car used in the music video; an identical model originally used for the video shoot was damaged whilst it was on set, therefore it had to be replaced.

The second car didn’t exactly have a smooth time in the limelight either though. Whilst filming, a camera fell from height, knocking the windscreen through. This meant the rest of the video had to be shot with no windscreen, which is why Jay Kay’s hair is flying about as if he is using a hairdryer.

A Car Sale From Another Galaxy

The famous car is now for sale by premium car dealership Amari Supercars based in Preston via Auto Trader. You won’t have to worry about getting bugs in your face as you drive, as thankfully the windscreen is firmly back in place. It will cost ya a pretty penny though as it’s up for a grand price of £549,995, which means you’re going to need to be a popstar just to afford one. Having said that, Jay Kay is not the only person to have enjoyed this 5.7 litre V12 monster as through its life it’s had five owners and has covered just 12,726 miles. The striking viola-metallic paint is contrasted with blue suede interior, which has been kept to a high standard, much like the rest of the car. The sale of the car will also come with plenty of paperwork including the original advertisement for it and its superstar background, as well as the original handbooks, service book, tan leather wallet and course the keys and fobs. It also comes with a whopping big V12 that is able to propel you 60mph in under 4.0 seconds and to a top speed of 200mph. Not bad for a car made in the 90s… “One of three classic supercars used in the Cosmic Girl video – it’s the only one that the ‘Space Cowboy’ actually owned – so although it might price-out most music fans at over half a million pounds – there could be a love affair reunited on the cards if Jay Kay’s browsing Auto Trader this week.”

For more details of the car, head to Auto Trader and Amari Supercars.