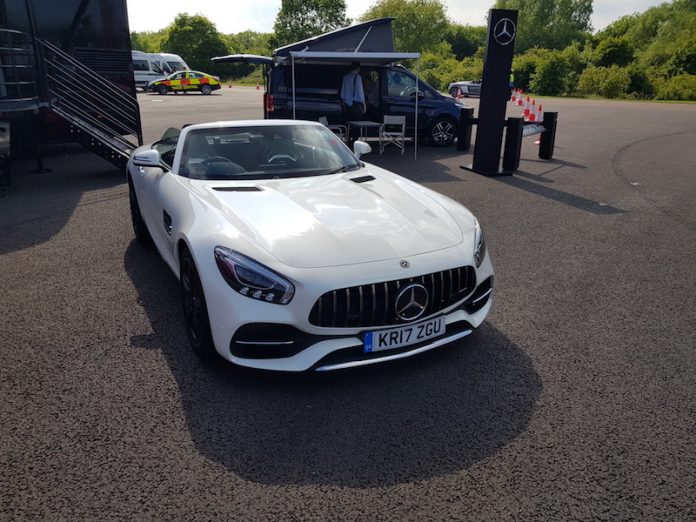 I was hoping to drive the AMG GTR at this year’s SMMT, but it was damaged prior to the event, so unfortunately it had to be pulled out. The AMG GT Roadster was a decent replacement, although I could only drive it on Millbrook’s high speed bowl at a top speed of 75mph. Not the most ideal way to experience the car, but as least I could day I’ve driven it. So this isn’t going to be the most comprehensive article going, but I wanted to share my experience all the same.

The model tested was finished in Diamond White and with the top down it looked stunning. The front has the same 15-spoke Panamericana grille that’s to be found on the GT-R and it looks menacing but also elegant at the same time. Step in to the cabin and you’ll soon find yourself low down in the premium sports seats. As you would expect from a Mercedes, the dash was well finished and it was a very nice place to sit, especially as it was a baking hot day. Time to turn the engine over, to which point you are greeted by that all too familiar AMG burble. The source of the noise is a 4.0 litre twin-turbo V8, which produces 469bhp with 629Nm of torque. This power is fed to a 7-speed flappy paddle gearbox which sends power to those big rear wheels. As you can imagine, it’s pretty quick – 0-62mph comes in 4.0 seconds flat and the top speed is a hair-ruining 188mph. As I took the car out towards the high speed bowl the gearbox was smooth and the steering felt rather meaty. The car was set up in comfort to begin with so the ride was nice and settled as we set of on our way. I saw ‘we’ as I was joined by a Mercedes rep on the short drive on the bowl. Once on the bowl we started of slow as we made sure there was no traffic approaching and then it was time to open the taps, all the way to a dizzying 75mph. I know it’s hardly going to set any speed records, but at least it was a chance to test the car’s acceleration.

The power comes lowdown in the rev range, meaning it takes no time at all to pick up pace, even when you have the drive mode set to a more sedate setting. You’ll need to whack the car in Sport Plus though, and it’s this point it feels like a different beast. The car is more responsive, the engine is louder and you get a sense the car is flexing its biceps as it sets about to deliver a knockout blow. And it does, sure I wasn’t able to really test the car’s limits and in fact it felt like I was merely scratching the surface, but my word this felt fast. Getting it to 75mph seemed to barely test the car and it felt like you were asking it to perform a light jog. Yes, of course it was pretty thunderous to 62mph in Sport Plus mode, but once I was at the 75 (ish) cruising speed you get a sense it’s getting bored and it would prefer you to plant your right down in a bid really get a move on. On the plus side, it was a lovely day, so cruising along at a steady speed whilst enjoying the weather and that V8 noise was rather pleasant, but it would be fantastic to see what this car is really capable of.